Making (dollars and) sense of the downtown library renovation bond

Durham has seen an outstanding turnout in early voting -- just short of 120,000 souls made it to early voting, just over half of the county's registered voter base. And given our bluer-than-blue shade on political maps, it seems nearly a fait accompli that all four bond issues will pass, including that for the main downtown library renovation.

Still, we noticed with some interest discussion on local neighborhood listservs wondering about the library's cost -- a $44.3 million project, about three quarters of which is allocated to construction.

That is four times the cost projected in 2008 -- then, an $8 million construction budget out of a total project cost of approximately $11 million. (For background, see BCR's extensive July 2008 and September 2008 coverage, and Lisa Sorg's March 2016 update.) 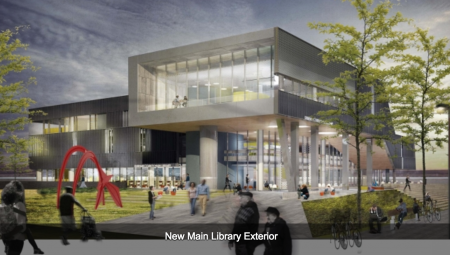 Of course, when the project was first under discussion back in '08, there was plenty of grousing from residents and elected officials alike about whether that number was sufficient to develop a first-class library for Durham, given that the renovation cost was only a bit more than the new-build cost of two of Durham's final new-build regional libraries.

The project team at the time put their best foot forward, pontificating on the building's panel/curtainwall exterior, and noting that communities with strong regional libraries (like Durham) needed less space than others.

Then that renovation project went away, only the resurface in the past couple of years with a new project team, a new library director, the departure of the former county engineer -- and, a budget that is a multiple of its old self.

Over the past few weeks, BCR has been taking a look at other library projects in the US and talking with Durham County Library (DCL) staff and project team members to try to figure out what's driving the cost.

Our take? While it's a steep rise in cost and a larger library than was proposed in 2008, it also is at least commensurate with other projects in smaller/mid-sized cities, and likely reflects a more realistic project than was initially proposed a few years back.