Earlier this week, two men — one, white with matching hair and silver-rimmed glasses, and the other, younger, black, tall, thin, with a close-cropped cut — were touring Goley Pointe, a problematic affordable housing community in Northeast-Central Durham whose final construction ran more than two years overdue.

A passerby spotted them.

“Bernie Sanders!” the passerby yelled at the white man. 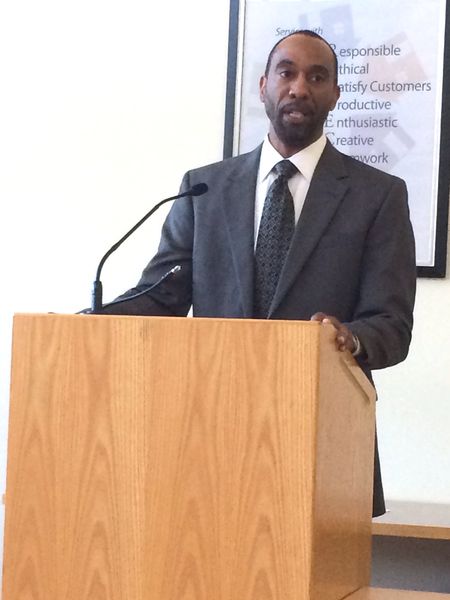 Dan Hudgins, board chairman of the Durham Housing Authority, who is white, told this story as a way of introducing Anthony Scott, the newly hired CEO of DHA, to the press and staff on Wednesday.

In addition to extensive experience in affordable housing, both in the private and public sectors, Hudgins said, “Anthony also has a sense of humor.”

Humor in its leadership be a departure for the housing authority, whose previous CEO, Dallas Parks, retired this month. Parks was not known for having a buoyant personality, and at times seemed gruff, even grim, as if leading a sprawling, underfunded agency was a situation to be endured, not a challenge to be embraced.

Scott comes from Baltimore, where he was the deputy executive director of that city’s housing authority, the largest such agency in Maryland. He also worked as the CEO of the Richmond Redevelopment and Housing Authority, and has 12 years’ of experience in private development where he worked on creating affordable housing in southern California.

“Durham is the place for me,” Scott told the small audience of DHA and city staff, and press. “I love how the city is committed to affordable housing. I’m excited that the Durham Housing Authority is being a significant part of that.”

Scott is now in charge of an agency that, like many sprawling bureaucracies, has had organizational and financial problems. Most recently, in early May, Rhega Taylor, who had headed DHA’s troubled Section 8 program, left suddenly, as did Chief Financial Officer Jeff Causey.

And the former housing community, Fayette Place, now 19-acres of weeds and concrete slabs in the historic Hayti neighborhood, is a reminder of financial violations and a failed attempt at redevelopment by a private developer who took the property off DHA’s hands.

Under CEO Paul Grazanio, the Baltimore Housing Authority also became embroiled in several controversies, including those concerning unsafe housing and the sale of public housing to private developers, which resulted in the layoffs of at least 200 maintenance workers.

And within the past year, the city settled a multi-million dollar lawsuit filed by 19 women who lived in public housing. They sued after maintenance workers demanded sex from them in exchange for repairs to their apartments. Thirty-seven more women recently came forward with the same allegations.

However, Scott was not found to be involved in the scandal; nor was he named in the lawsuit.

Now in Durham, for the first time Scott and DHA will work more closely with the city, in particular the Community Development department, on joint affordable housing goals.

Deputy City Manager Keith Chadwell was on the selection committee that picked Scott from 42 applicants. “The housing authority and the city have never had that kind of relationship,” Chadwell said. “I have a very, very strong sense that his experience will make for a successful relationship.”

Scott’s hiring represents a new chapter not only at DHA, but also in national trends in affordable and public housing. Because of decreased federal funding from Congress, local housing authorities across the U.S. have less money to meet increased need for affordability. In Durham, there are only 38 rental units available for every 100 very low-income households, those earning less than $20,000 a year.

Meanwhile, public housing units themselves are aging, and many are scheduled for eventual demolition and reconstruction: The oldest public housing community, McDougald Terrace is 63; all but one of the 13 communities were built before 1981.

However, in Durham, fewer landlords are willing to accept Section 8 vouchers because of the paperwork and inspections that are required, and the overheated rental market. A landlord can command more for an apartment or house than even a generous Section 8 voucher can cover.

Yes, Scott will need a sense of humor.