"I thought my child would wind up in jail": Budget cuts could close the Wright School in Durham, which helps kids with mental illness

The legislature is as predictable as the Summer Solstice: Come June, budget season, it's time to swing the guillotine over the head of the Wright School. The school, which is on North Roxboro Street in Durham, serves kids with mental, cognitive, and emotional disabilities. For many kids, this school separates them from a future in the prison system.

The proposed state senate budget directs the Department of Health and Human Services to halt any admissions or readmissions to the school, effective June 30. That's just a month for the parents of these kids to try to find, as the budget states, "other appropriate educational and treatment settings." The school would officially close on Sept. 30.

Well, these very special facilities don't exist, at least not any significant amount. In fact, the Wright School is unique in its approach to helping these kids.

I spent time at  the Wright School for a story I published in the INDY in 2009, when the senate first made overtures toward closing it. I'm reprinting that story here (without the photos, which are wonderful but not mine; shot by Jeremy M. Lange). You can also see it archived on the INDY website. It was a heart-breaking, yet inspiring experience.

•Number of slots available at one time: 24

Editor's Note: To protect their privacy, some children are not named in this story. The Indy identified children with their parents' permission.

"Who says country music makes you sad?" In the kitchen of his Chatham County home, Logan St. Clair explains the title of his science project that recently won an award at his elementary school. Zinnia plants exposed to music by Johnny Cash and Wilco, he found, grew faster than plants that weren't exposed to music at all.

The Wright School was to Logan what Johnny Cash was to zinnias. Since kindergarten Logan had been defiant, a "wild child," says his mother, Jennifer St. Clair, a social worker. Medications like Adderall, Concerta and Strattera didn't help; he was eventually diagnosed with anxiety. In October 2007, Logan, then in fifth grade, received his first suspension from regular public school. Finally, having exhausted all other options, St. Clair met with a social worker at Carolina Outreach who suggested that Logan apply to Wright School, which treats children with severe mental, emotional and behavioral illnesses.

"It was the hardest thing to do as a parent, but we had tried everything else," St. Clair says. "It's like admitting there is a significant barrier to your child's success and you as a parent can't handle it."

"We learned lots of good stuff," says Logan, who, other than an amped-up restlessness, seems like any 12-year-old boy. "Share stuff. Be respectful. Be aware of what you're saying."

He pauses. "Being polite was hard for me."

In August, he graduated. Two weeks later, he entered regular public school, where he earns mostly As and Bs, and excels in math and science.

"He has coping strategies," St. Clair says. "He can remove himself and be calm. And he can accept the adult decision."

A group of powerful adults in state government are deciding the fate of the Wright School. Gov. Bev Perdue's proposed budget, which the General Assembly begins tackling this week, would close the nationally known school, located in Durham, and its counterpart for teens, the Whitaker School in Butner. [Update 2016: Whitaker has been converted into a residential psychiatric facility, and now accepts Medicaid, and removes the financial burden from the state.]

Wright and Whitaker have been on the chopping block before, but never in a recession this deep and in a budget crisis this severe. Facing at least a $3 billion shortfall, North Carolina would save $5.8 million over the next two years by closing the schools; it's a small percentage of the overall $21 billion budget, but in desperate times, lawmakers are scrutinizing programs no matter how small—or how successful.

Wright's size, success and uniqueness contribute, ironically, to its vulnerability. Each year, the school serves about 55 kids in a highly structured environment that combines individualized public school education with extensive mental health services. The "re-education principles" of finding a child's strengths and centering on the family have turned around the lives of hundreds of troubled children over the past four decades, many area parents and social workers say.

The financial sticking point is that Wright is not eligible for Medicaid reimbursement, placing the financial onus on the state and its Department of Health and Human Services. Yet, the savings in closing the schools may come at a later, more expensive financial, social and human cost: Without appropriate services, these kids could easily wind up imprisoned or hospitalized.

Continue reading ""I thought my child would wind up in jail": Budget cuts could close the Wright School in Durham, which helps kids with mental illness" »

An analysis of the Durham election snafu: It's about more than bad math. It's also the GOP legislature. 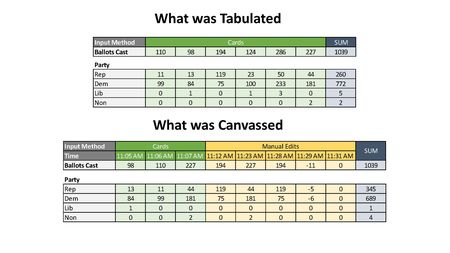 Who and why, we don’t know, but what went amiss during the Durham primary in March has resulted in a state investigation, political gamemanship calling for a new primary, and a do-over for some people who cast provisional ballots.

And arguably, the elections snafu is due in part to other factors:

First, the math: The total number of ballots in question is 1,039. The State Board of Election voted unanimously yesterday to allow 892 people to re-vote in the Durham primary because their provisional ballots were mishandled. This summer, those voters, who were flagged in the polling books as casting provisional ballots, will be mailed new ones.

The state counted 147 provisional ballots yesterday; those ballots were still in their envelopes with the voter information attached.

Download Durham County_Presentation by the State Board of Elections.

Since the total number of provisional ballots in question —1,039 — would not affect the outcome, the state board rejected calls for a new election from Commissioners Michael Page and Fred Foster, challenger Elaine Hyman, and their supporters. Those included Lavonia Allison of the Durham Committee on the Affairs of Black People and Anita Keith-Foust; both are pro-development, particularly pro-751 South. Foster and Page have long supported that controversial development.

Even the local board, which consists of two Republicans and one Democrat, opened the door for a new primary, saying there was a “great deal of public anxiety” over the results. (Republican county board chair Bill Brian is a lawyer with Morningstar firm; he previously was with the land use and zoning law division of K&L Gates, which represented 751 South developers.) The board has had a 2-1 majority since Gov. Pat McCrory was elected; the governor's party determines the board majority. In turn, the board majority hires the chief election judges.

To gauge the extent of that anxiety and where it’s coming from, BCR has requested all emails from constituents to the commissioners about the provisional ballots.

Second, the blowback: In March, the local elections board had approved or partially approved the 1,039 provisional ballots that had then been entered into the state’s election management system, also known as the provisional module. However, during the March 22 count, also known as the official canvass, the board and staff noticed there were only 980 paper ballots, leaving 59 unaccounted for.

It appears that 59 ballots were not lost, but rather run through the tabulator twice, according to the state board’s investigation. In addition, a temporary elections employee had told Director Michael Perry that an elections staff member had instructed her to run some ballots twice in order to reconcile the numbers.

The staff member who gave that directive has not been publicly identified. BCR has requested under the open records law the public portion of the personnel files on all staff members who have left the elections department since January.

Continue reading "An analysis of the Durham election snafu: It's about more than bad math. It's also the GOP legislature." »