Bull City Rising
About Archives @bullcity
When public becomes private: Luna Rotisserie interested in leasing part of Chickenbone Park
Shawn Stokes of Luna: "I didn’t think that there would be public outcry about it," + Black Wall Street Plaza still needs our attention 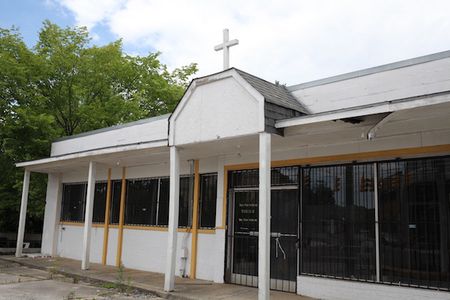 The owners of Nosh and Piper’s in the Park received a $100,000 grant from the city to transform a blighted former gas station and church on West Chapel Hill Street into a restaurant.

It was one of two neighborhood revitalization grants the city council awarded last night; the other was another restaurant project with different property owners on Angier Avenue.

Wendy Woods and Stacey Poston originally had requested $170,000 in grant funding to supplement the $722,000 in private investment for the project. The city’s Office of Economic and Workforce Development lowered that amount to $100,000. Council approved the grant unanimously.

The West End is a “targeted area” for these types of economic incentives, said Chris Dickey of OEWD. “And this is a homegrown business.”

Woods and Poston live nearby in the Burch Avenue neighborhood. “We’ve been trying to invest in a business in that area for a long time,” Woods told Council, including the old co-op building, which is now The Cookery.

The new restaurant will create 36 jobs over three years, all of them paying a living wage. The menu prices, Woods added, would also be moderate and affordable to those living in the area.

Councilwoman Jillian Johnson asked Woods if she was committed to hiring from the neighborhood.

“Absolutely,” Woods replied. “I was brought up in Durham and will support my community.”

The city invested in this neighborhood in 2014, awarding a $220,000 streetscape grant to Kent Corner; the money came from neighborhood revitalization funding and revenue from the sale of a city-owned parking lot on West Chapel Hill Street.

Projects funded through Neighborhood Revitalization Grants are expected to help revitalize an area, include private financing, create and retain permanent full-time, jobs that pay a living wage, and to make those jobs accessible to lower-income neighborhood residents, including the unemployed. 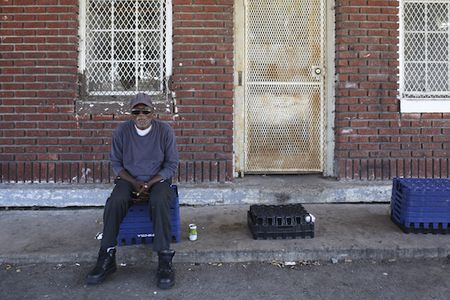 Curtis, hanging out at 2201 Angier Avenue  Photo by Lisa Sorg

However, there was some anxiety over whether a restaurant project in Old East Durham would accomplish those goals. Migrate Property 2, LLC, requested $100,000 in grant funding to convert a vacant 1930s Gulf gas station into a restaurant at 2201 Angier Avenue.

Council approved the request, but because of concerns over gentrification, not unanimously. Council voted 5-1 for the project. Johnson voted no; Councilman Charlie Reece was absent from the meeting.

Cameo Voorhies, who lives on East Knox Street in Duke Park, asked the city for $100,000 to renovate the brick building. Her company, Migrate Property 2, is looking for a tenant to operate a restaurant, cafe or coffeeshop. According to city documents, the historic structures would be kept intact. The canopy space would be enclosed to increase the square footage from 1,200 to 1,623 square feet.

Migrate bought the building in March for $95,000, according to county property records.

Johnson said she was concerned about whether the new restaurant would benefit the neighborhood — revitalizing it rather than gentrifying it. The area is 69 percent African-American, with a median household income of just $23,000 a year, well below the county’s median of $67,000 annually. More than half of renters are “cost-burdened,” meaning more than 30 percent of their gross income goes to housing costs.

“There is nothing in your plan with specific job benefits,” Johnson said. “And who would be served at the restaurant?”

Voorhies told council that she would encourage a tenant to hire employees from the neighborhood. “Ideally it would be a local business wanting to do a second location,” Voorhies said. “We’re still in that process.”

However, while a tenant could be encouraged to hire from the neighborhood and pay a living wage, Voorhies acknowledged she ultimately could not control those decisions.

Migrate Property has bigger plans for Old East Durham than the restaurant. In its proposal to the city, the company wrote that, “We see Old East Durham and the Angier-Driver Corridor as the next Geer Street area, but more beautiful.” 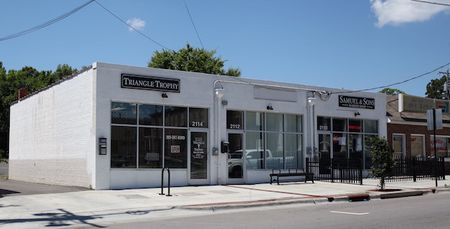 Migrate owns other buildings in the neighborhood, including 2110 -2114 Angier Avenue. It houses a trophy shop and barber. Two storefronts are vacant. According to county property records, Migrate bought the commercial strip for $240,000 last December. Ten years ago, the sale price was $85,000.

One of the storefronts is slated to become a small family-owned pharmacy this fall, Migrate wrote in its proposal. The company also plans to work with a Durham muralist to paint the east side of the building to be “an additional signal of change to the neighborhood.”

They renovated the 1,700-square-foot, three-bedroom home and converted it into a rental. According to zillow.com, which offers a rental listing service, the home was posted on the site last August asking $1,450 a month; it rented at that price within a month. Those prices are becoming more common in Old East Durham. A three-bedroom on Hyde Park Avenue is going for $1,700 a month; on Taylor Street, the rent for a three-bedroom is listed at $1,500 a month.

Migrate/the Voorhies are looking for other investment properties, according to its grant proposal, writing, “We are in talks with other property owners in the area who may also want to sell.”

Aiden Graham, a community organizer and social justice activist, told Council that while he’s long pushed for a neighborhood stabilization program in Old East Durham, the proposal for 2201 Angier Avenue “looks like a gentrification project that would further contribute to displacement of people in the neighborhood.”

Mayor Bill Bell countered that since the building has been vacant, “I don’t consider this a case of gentrification. We’re trying to create an economic opportunity for businesses.”

There is a precedent for neighborhood revitalization grants in this neighborhood. Joe Busfan, whose building housed Joe’s Diner and the TROSA grocery at 2100 Angier Avenue received a $200,000 from the city in 2010. It also received $237,000 in historic tax credits. Last year, the diner became a commissary that isn’t open to the public; the grocery closed in 2012.

Councilman Eddie Davis added that this is “an issue that cuts both ways. I’m not sure if we would want to veto a proposal that would bring some kind of renewal to a certain area. We also have to do everything we can to bring commerce and economy to a neighborhood that has’t had that. We have to balance the discussion between revitalization and gentrification.”

While supportive of the project, Councilman Steve Schewel advised Voorhies that city staff will work with the company to find the right tenant, and “we’ll be holding you accountable for that. It’s not a passing interest. It’s not insignificant to us.”

>"Last year, the diner became a commissary that isn’t open to the public;"

What is a "commissary that isn't open to the public"?

Joe Bushfan should not be raised up as a hero or any kind of example regarding urban revitalization. Joe's Diner and Commissary, in my opinion is one of the greatest failures concerning neighborhood revitalization grants. They now only serve food trucks who drive out of OED as fast as they can.

As a resident of OED, it makes me sick every day when I drive past Joe's Diner and see how much opportunity has been missed and how it limits any revitalization of that intersection.

But, alas, I am sure that he will open up his crappy hot dog stand when better businesses come in and he sees opportunity to make a buck.

The above comment disturbs me. Joe came into the neighborhood when no one else would and made a success of Joe's Diner. When the streetscape improvements happened, it killed the Diner as people had a very hard time accessing it. He did what any good businessman would and found a way to continue using the property. The grocery also failed due to no fault of his but through a series of mistakes by the operator, including not providing the type of food that the community wanted. His willingness to come into the neighborhood and to that intersection helped to significantly lower the crime in the area and make it the desirable place it is today. Please do not judge the actions and efforts of the past by what exists today. There are still a number of empty storefronts there so I suggest that Driverstneighbor open his/her own business and see what it's really like, then imagine what it was like six years ago.

We shopped at TROSA grocery as we generally like to support anything TROSA does. It carried a really wide range of items, brands, and prices.

I suspect it did not survive, in part, because they did not sell alcohol or cigarettes. It was small, and trying to be full service (produce, household goods, meat, dairy) and the margins are really really small on those items. Especially when affordable for the neighborhood. I'm grateful they tried - but don't blame them for failure to thrive in that line of business.