751 South gets yet another pass from Durham Commissioners, delaying a $1 million payment 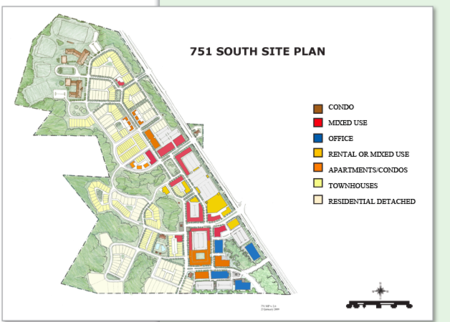 Like a recurring rash, the controversial and gigantic 751 South project came before the Durham County Commissioners last night when the developers’ representatives requested yet another concession on their plan. Because of “cash flow issues,” Southern Durham Development asked the commission to delay the payment of its mitigation fees — $1 million — that the state requires for projects in the Jordan Lake watershed.

The money would be funneled back into the watershed to pay for projects that help protect the lake, a source of drinking water for 300,000 people, including Research Triangle Park.

But instead of paying when SDD files the site plan, which is common practice, although not formal policy, the company wants to wait until the certificate of occupancy is granted.

While SDD had cited cash flow as a reason for the delay in the staff report, Dan Jewell contradicted the document. “This is the timing of the expenses and revenues, not that there is no money to do this.” said Jewell, who, with attorney Cal Cunningham, represented SDD. “To shift that payment would be of huge benefit.”

The question: Benefit to whom?

Last night’s meeting was reminiscent of the very public battles over the development from 2008–2010: The tension in the chambers, the tension on the commissioners’ faces, the unwillingness of SDD to compromise. And the outcome was the same. The developers got their way, in part by repeating their strategy the original fight: courting the black vote with the promise of jobs — jobs, that six years on, have failed to materialize.

Michael Page, Brenda Howerton, and Fred Foster Jr. voted to allow SDD to delay the payment, while Ellen Reckhow and Wendy Jacobs voted against it.

The 167-acre project is forecast to include 1,300 houses, townhomes, apartments and condos, plus as much as 600,000 square feet of office and retail space in the environmentally sensitive Jordan Lake watershed, along 751 South near the Durham/Chatham County line. It could be built in as many as eight phases. The $1 million mitigation fee is just for Phase I.

Before we delve into all of the reasons the payment delay is a bad idea, it’s time for a refresher course:

This is the same developer that also because of cash flow issues, is on a payment plan with the county tax assessor’s office. The delinquent tax payments date back to at least 2012.

This is the same developer that from 2005–2010 pulled the following shenanigans:

Tried to replace a U.S. Geological Survey with a private map that removed more than 200 acres from the watershed. Those boundaries are key to guiding less development in the area.

Tried to invalidate a citizens’ protest petition by giving an easement to the state Department of Transportation, thus putting neighbors beyond the valid protest zone.

Approached State Rep. Tim Moore of Cleveland County to sponsor legislation forcing the city of Durham to extend water to the development.

Created Durham’s first SuperPAC, Durham Partners for Progress. SDD poured $50,000 in to DPP which independently supported the 2012 campaigns of incumbents Page, Howerton and Joe Bowser and challenger Rickey Padgett. At that time, the commissioners was voting to extend sewer service to the development, which they approved, with Reckhow dissenting.

The rationale for delaying the million-dollar payment, SDD reps Jewell and Cunningham said, is that in 2014 the state strengthened the Jordan Lake nutrient rules (the same year lawmakers approved the doomed SolarBee project). Simply put, that means developers have to do more to keep nitrogen and phosphorus out of Jordan Lake. Nitrogen and phosphorus feed the algae, an abundance of which kills aquatic life and harms water quality.

Yes, the rate of the offset payments have sharply increased, but it should not have surprised anyone, especially a developer who specifically targeted the Jordan Lake watershed for a project, that some day the rules would become more stringent. That’s why developers build in contingency funds.

And by paying when the site plan is filed, the mitigation funds can be used more quickly. Commissioner Ellen Reckhow noted that “some of the worst water quality impacts can happen during construction. It’s a sensitive time when a lot of earth is being moved. We’re talking about a project that has some of the greatest potential to impact Jordan Lake that we’ve seen.”

The county staff opposed the change because it would create more bureaucracy and tracking of the development’s certificates of occupancy, and thus more public funds to pay for the additional work. In city developments, the payment is made at the issuance of the site plan.

“This was a committed element from this project,” said Jay Gibson, county engineer. “And it’s been a longstanding practice in the county. Our concern is that the devil is in the details. It changes the workflow. Are we having to chase COs [certificates of occupancy]?”

Reckhow, who is running for re-election this fall, suggested establishing a performance bond or a compromise on the timing; instead of SDD paying when filing a site plan, it could wait until it filed the building plan. That is still sooner than waiting for a certificate of occupancy.

Neither Jewell nor Cunningham would agree to those terms.

The refrain of the yes votes sounded familiar. Page, who did not advance in this year’s primary election, clearly wants 751 South to be part of his legacy. He voted for the project in 2010.

“One of the things that disturbs me the most is that the project would not continue,” he said. “It is hard to believe. It’s a thorn in my flesh. … I have seen so many times that we’re not developer-friendly in this community. I still contend that this project would lend a totally positive image and progress for Durham.”

Howerton, who also voted for the project in 2010, used the occasion to deliver rambling comments. She said that she received death threats over her vote. (However, she did not say if she filed a police report.) “All because someone wants to build something in a community,” she said. “It’s unbelievable. Whoever did that, I want them to hear my voice. It’s been sitting there all these years — that people could be so mean.”

She won one of the five primary slots and will proceed to the fall election.

Commissioner Wendy Jacobs, who is also running in the fall, not only is concerned about the staff time required to track the fee payments, she also remarked that by relaxing the practice for SDD, the county is setting a precedent.

Now any developer building in the watershed can request the same leniency — and expect to get it:  “We’re talking about changing the entire way we’re doing development.”

Alex Michell, one of the 751 principals, couldn't pay 751 South property taxes or their runoff mitigation fees, but he had no problem making big campaign donations to Page and Howerton—$1000 each.

As a result of last night's BOCC meeting, the 751 boys will be writing water policy for all future Durham County developments. Looks like their real checks bought a blank check from Howerton and Page. What a deal!

With Foster & Page out after November, maybe the concessions to this particular developer will end.

By the way, how do you get a 4 year payment plan on your property taxes? I wonder if they have to pay interest or if there's a special break for that, too.

Why is Durham County so anti-clean water?

@will My assumption is that these leaders have never lived with rationing, non-potable water, nor do they see what's happening to communities with other ACE water projects (New Orleans, Atlanta, ) to see their future.

Of course, there's another misguided Man vs Environment narrative that believes JOBS! will magically happen if we tame these wild areas. Basic colonialism.

Voters were generous with Brenda Howerton in the primary--despite PA withholding their endorsement over 751. This vote is a nail in her coffin. I suspect she's serving her last BOCC term. I'm sure it was intentional this issue didn't come up before the primary. The feet of these developers need to be held to the fire on every single cent of every single payment owed. On time. All of it. Shame on Brenda and Michael.