Unable to get a slot at the downtown market, local farmers launch Durham Roots Market at Northgate 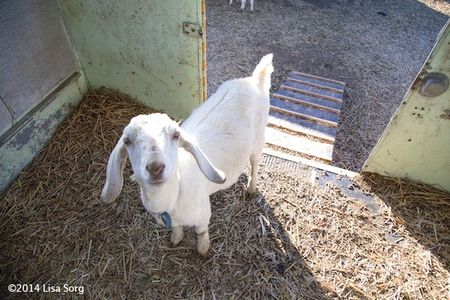 Prodigal Farm in Rougemont will sell goat cheese at the Durham Roots Market.

As a boy, John Monroe sold plants by the side of the road, not as punishment but for enjoyment. “There is nothing like people giving up their hard-earned cash to buy a plant,” he says.

Monroe now owns Architectural Trees in Bahama, where he raises and sells hundreds of species, including the Weeping European Hornbeam, Sawara Cypress, and Blue Spruce — plus blueberries.

He is one of seven local farmers who are pioneering the Durham Roots Market, an answer to the very successful, albeit increasingly crowded and competitive Durham Farmers Market in Central Park. And unlike that market, where only 6 percent of the farm vendors are from Durham County (not including restaurants such as Scratch bakery and Fullsteam Brewery, or the crafts), the Roots Market is restricted to only Durham farmers, including those new to agriculture.

The weekly Roots Market starts Saturday at 8 a.m. and runs until noon in the parking lot of the locally owned Northgate Mall, near the cinemas. There will be no food trucks or craft booths — only farm goods at 19 stalls. Culinary students from local high schools will cook with products provided by the vendors. There are also plans to team up with the Durham Public Schools' Hub Farm.

These fresh-food options are key in a neighborhood, which, with 4,000 to 5,000 apartments, still technically lies within a food desert. The nearest Kroger is about a mile and a half away, north of I-85. “We’re focusing on agriculture, on protein, produce, and plants,” says Monroe, who sold his wares at the Durham Farmers Market for 11 years before leaving in 2010. “It gives real meaning to the word ‘local,’ to keeping your money in Durham.”

The Roots Market is also part of the Farmland Protection Advisory Board’s goal to preserve agriculture and open space and to support farming in northern Durham County. In 2009, the County Commissioners passed the board’s Agriculture and Farmland Preservation Plan, which reported that 242 Durham farmers managed more than 26,000 acres, about half the amount farmed in 1990. Black farmers make up an even smaller portion of local agriculture producers — just 3 percent.

“We have to keep farming viable,” says Kat Spann, who with her partner, David Crabbe, owns Prodigal Farm in Rougemont. (She is also a past chairwoman of the farmland board.) Prodigal produces goat cheese, which is sold at the South Durham Market. However, this year Prodigal’s application to sell at the Durham Farmers Market was rejected.

The Durham Farmers Market also rejected Cindy Hamrick's application. She owns and operates Carolina Farmhouse Dairy, a small first-generation farm near Bahama that produces organic yogurt from pasture-raised, grass-fed cows. She will sell her yogurt at the Durham Roots Market. "I love the philosophy of the Durham Roots Market," says Hamrick, who also sells to the Carrboro Market. "I hope we can get more vendors to get the heartbeat going."

The Durham Farmers Market has strict rules about which farmers can get a coveted stall in Central Park. Farmers must produce their own goods on land within a 70-mile radius. The South Durham Market pools its vendors from with 50 miles.  Download Official Rules DFM 2016-2

And seniority plays a large role; there is a minimum number of weeks a farmer has to sell at the market to qualify for what would be known in the academic world as tenure. Once a farmer is in, and consistently adheres to the rules, then he or she can stay for years. The South Durham Market, says Spann, requires vendors to reapply every year.

In selecting its vendors, the Durham Farmers Market tries to ensure a wide variety of goods are sold, and to avoid redundancies (although at certain times of year, everyone has tomatoes). These rules, which are approved by the market's board of directors, can exclude small farmers who may sell only one crop — "the person who has just a field of sweet corn," says Will Wilson, who is on the farmland board. Many Durham farmers fall into this category; according to the 2009 farmland report, half of the county's farmers sold less than $2,500 in goods per year.

Durham Farmers Market Manager Jenny Elander acknowledges that as the market has grown quickly. And with the construction of the Liberty Apartments and other projects, nearby parking is tight and vendor space is tighter. "We’re full and we have trouble accepting everyone," Elander says. "We wish the Durham Roots Market all the best."

The economics of a farmers market are "delicate," Spann says. It needs an initial mass of vendors to attract customers. And customers want a lot of different vendors to choose from. However, if there are too many vendors (or too many selling the same item) the dollars are spread too thin.

Farmers markets grow slowly, although Durham could finally be large enough to support three such ventures. Monroe, also a farmland board member, started selling at the Durham Farmers Market in 1999, its second year. He was one of six vendors, he says, before "it turned into the mega-experience." By contrast, the Roots Market is targeting people who want to buy their produce, eggs, and meat, and then get on with their day. "It's for the hunter not the stroller," Monroe says. "We're trying to be an old-fashioned market."

Which neighborhood is this referencing?
"these fresh-food options are key in a neighborhood, which, with 4,000 to 5,000 apartments, still technically lies within a food desert."

From the geographic center of Northgate Mall (where no one lives) it's just barely more than a mile to Kings, Kroger, Whole Foods, Harris Teeter, and Costco. There are multiple buses that go to Northgate Mall. The Durham Roots Farmer's Market seems more about providing local farmers a place to sell goods (which is awesome) than about addressing the needs of individuals without access to places to purchase fresh or local food.

A food desert is defined as an area where full service groceries that are within walking distance (generally considered 1/2 mile or so) are scarce. Not all of Northgate is in a food desert but some of it is.

"It's for the hunter not the stroller"

I see what you did there...

Seriously though, I will enthusiastically support this, even if it is just lettuce and berries for a while.

This is a great alternative to the downtown Durham Farmer's Market. The downtown market is a social gathering for individuals with disposal income. It has overpriced produce, a small selection of goods, and vendors selling arts and crafts that have nothing to do with food.

Our current farmers markets are significantly overpriced. An alternative down to earth market offering food for eating rather than discussing would be a welcome addition.

This is great! Northgate Mall is an area that can bring old Durham and new Durham together. I like the idea of diversity in markets and market locations. I will make a point of going on Saturday to support. I can walk there from my house-

'near the cinemas' seems a little vague and maybe unfortunate? that's kind of stashed away and if out by the entrance cramped and congested? why not over the other side between the C&H/Guitar Center and the Sears/ Auto rental space, a lot more visible to road traffic?

With a 1/2 mile walking distance requirement and no assessment of income or transportation options, "food desert" could be added to the long list of descriptors once valuable that were later rendered worthless activist catchphrases.

More meaningful:
"The USDA defines what's considered a food desert and which areas will be helped by this initiative: To qualify as a “low-access community,” at least 500 people and/or at least 33 percent of the census tract's population must reside more than one mile from a supermarket or large grocery store (for rural census tracts, the distance is more than 10 miles)."
http://americannutritionassociation.org/newsletter/usda-defines-food-deserts

If I may, I'd like to address the price issues. Take blueberries, for example. Shopping only on price, nothing can compete with a tub of blueberries shipped in from Chile (or wherever). Locally grown blueberries are gonna cost more for so many reasons: the local cost of living, the small size of the farms, hand-picking, the recent freeze we had, property taxes and who-knows-what. The higher cost of locally produced food sold at the farmers market, and this goes for all farmers markets, is the value we place on preserving our farmland and the environmental benefits of our watersheds. It's hard to tell what's underpriced or overpriced, but Costco products aren't a good comparison.

Speaking for myself here, and not the market, I shop at Costco and Harbor Freight because they're cheap, but sometimes I just have to get that crowbar and open my wallet. IMHO, this (along with local brews) is such a case.

I'm no economist, but I think "expensive" is a better word than "overpriced." The farmers are charging, at minimum, whatever will make it worth their while to pick their produce and bring it to market. I doubt many farmers are making a killing with steep markups.

If the farmers market continues to be crowded with people willing to pay those premium prices, then the prices must be acceptable. If they're too high, people won't buy, and the food will be overpriced.

In addition to Will's points above, we're also paying for a story and an experience. Most of us have probably seen the Tampa Bay Times exposé about misleading sourcing claims in farm-to-table restaurants. One takeaway is that we have a powerful desire to buy food that's been on a storybook farm. Unlike Tampa's restaurants, however, the produce and meats at our farmers markets do come from regional small farms.

Thanks to all those that came out to the market Saturday! We had a fantastic turnout! Some vendors had to restock multiple times (if they could)! Next week we'll have produce -- check us out on Facebook for updates.