We'll live blog the highlights of today's City Council meeting. Mayor Bill Bell has an excused absence today; he's out on other business.

1:03: Cora Cole-McFadden announces that a group of minority health care providers are not "coming our way" because of HB2.

Tom Bonfield says there is a supplemental agenda item about a Requests for Proposals regarding the Morgan Street parking garage.

Now going through the consent items and then we'll hear public comments.

Durham Beyond Policing Campaign: I address you all today as a coalition of many organizations, who firmly oppose the building of the DPD headquarters. ... We're bringing up the way policing in Durham causes harm. Our campaign requires an active divestment from police and reinvestment [in low-income, minority people]. We are asking the City Council not to build the DPD HQ and to implement participatory budgeting like has been done in Greensboro.

The money for DPD HQ could go to youth centers, street maintenance, affordable housing. It's doubly offensive to build without buy-in from that neighborhood. It's violent to build a police station in an area where black people are over-policed. Don't build another monument to police that engages in racial bias.

By May 16, we demand that City Council stop construction plans on the building.

Cole-McFadden: What happens if we can't vote by May 16?

1:42: [We're waiting for a presentation about the Durham Workforce Development and the Compact Neighborhood Land Use plans. A DPD first crime report is on the agenda, but the details usually aren't publicized until the Monday night session.]

Some facts from the report:

Kevin Dick: A highlight for DPS is that our graduation rates are improving. This is integral how we deliver services. It impacts the number and profile of our youth programs: Durham Youth Work Internship Program and Yes program. With nonprofits and the library, we're connecting youth with our internship programs.

The job placement services for our NCWorks center: We formed an adult provider collaborative, government and nonprofit to discuss issues related to people who have multiple barriers to employment. Group meets monthly. Barriers include criminal backgrounds. One grant proposal would put an NCWorks Center in the county jail. Also we applied for a $1.4 million grant to serve people on work release programs and in halfway houses. These grants are competitive, but we're hopeful.

Cora Cole-McFadden to Kevin Dick: Your leaving will leave a void.

Steve Schewel: It's amazing you'd leave Durham for the Charlotte Hornets. We'll miss you. Thank you for all of your great work. I do have a few questions. The success of the former offender program. What limits the number of participants?

KD: Former offender are considered a "hard to serve" group, multiple barriers to employment. Client to staffing ratios should not be more than 60:1, right now we're at 160 to 1.5. So it's a matter of money.

SS: How is traffic at the career centers? I've heard it's down.

KD: That's correct. Part of the reason is the unemployment rate has gone down. Another reason is that technology has improved. People can access services at home or the library. When you move to full employment, the people left are usually the hardest to serve.

SS: With the staffing at the career centers, they are a great resource and we need as many people to use them as we can. How far along is the StepUp Ministries?

KD: They are operating and come to the board meetings. As they've ramped up, our referral process isn't as smooth as we like.

SS: How is the cooperation with Made in Durham? How is working for the people serving?

KD: Made in Durham is invaluable. Companies represented on the board are worksites last summer. Where they add value is in extending the message delivery to businesses, nonprofits that work with youth.

CCM: How do we reach out to kids at my favorite school Lakeview alternative school for summer programs?

James Dixon: We don't target Lakeview specifically but all DPS schools. We went out to each community for application assistance programs to help students. We have received 780 applications. One young man was from Lakeview; I'm sure there are more.

[The city has also purchased land around Lake Michie as a buffer.]

Don Greeley of department of water management: On to water and sewer rates: objectives are affordability, conservation and sustainability. Small increases to cover operating and regulatory costs. And we want to reward customers for conservation.

CCM: Are we doing all we should on conservation.

DG: A number of utilities are backing off conservation, which is surprising to us. We continue to look for ways to improve it. For example, the toilet rebate program. Find ways to install low-flow toilets in low-income neighborhoods where the help is needed the most.

DG: Consumption has stabilized but is slightly up in 2015 because of the growth in the area and the end of the drought. But now the whole state is abnormally dry according to the drought monitor so maybe that will remind people to conserve.

A typical customer will see a 2.7 percent rate increase in water/sewer rates. A Tier 1 customer, the household with the lowest usage, the increase will be about 56 cents per month.

Charlie Reece: Why are the rates between Tier 2 and 3 so close if we want to encourage Tier 3 to conserve?

Tom Bonfield: Tier 3 is where all the commercial businesses fall automatically. They're not eligible for the Tier 1 or 2.

DG: The rate increase is lower than we thought. We projected 3.1, 3.3%, but instead it's only 2.7%. Raleigh in one year did a 9 percent increase, and then six months later, 7 percent. We prefer incremental increases each year, slightly above inflation.

The UNC Dashboard is a good tool to compare utility rates across the state. 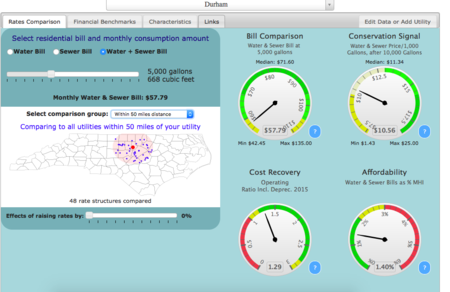 It's 3:02 pm. The water and sewer discussion continues. However, BCR must sign off for another adventure.

"By May 16, we demand that City Council stop construction plans on the building."

Exact wording? ... If so, city council shouldn't even respond at all.

Yes, the exact word was "demand."

[The city has also purchased land around Lake Michie as a buffer.]

What's this about? If it's buying vegetated buffer around a reservoir to replace riparian buffer around small urban stream, that's just a part of our nutrient loading problems. The two buffers don't provide the same environmental benefits. (Just had to say it..)

@Will--the primary purpose of acquiring land around Lake Michie is to provide for expansion of the water supply reservoir in the future. Transactions have been between willing sellers and the city; because of this long range planning the city owns almost all of the land that will be required when the time comes for the expansion.

Thanks Don...with all the people moving here, I worry about the next big drought. That's forward thinking.

There are most probably geographical limits to the expansion of Lake Michie because NC State obtained the status of Dedicated Natural Preserve for its Hill Forest (above the Lake) specifically to prevent use of any part of the forest for such an expansion. The dedication was approved at some point in the 1980s or 1990s by the Council of State (Governor, elected Commissioners, State Treasurer and Auditor) and can only be reversed by a significant majority of both legislative chambers. However, the amount of land obtained from willing sellers since then will still allow some expansion.

"... can only be reversed by a significant majority of both legislative chambers."