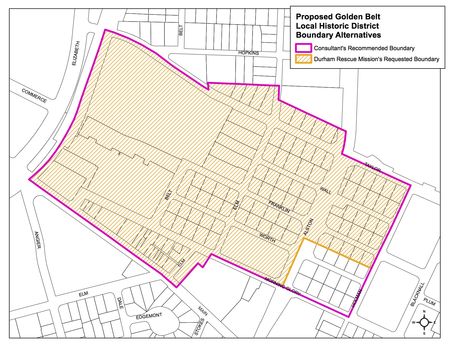 It cost just $265 to build a three-room house on Morning Glory Avenue; for an extra $4, the carpenter would toss in a privy. That was in 1900, when the 20-acre mill village, then known as Morning Glory, housed the workers who made cloth and thread at the nearby Golden Belt factory.

More than 115 years later, the Golden Belt neighborhood is one of the last areas near downtown that is relatively affordable for the middle-class. And with its tight street grid and modest former mill houses, the neighborhood feels distinct — character that residents want to preserve through a local historic designation.

“It’s our hope that local designation will guide further development, small-scale in form and character in the future development,” Jennifer Martin Mitchell of MdM, the city’s consultants for the project, told the Historic Preservation Commission at a special meeting Wednesday morning.

The HPC recommended the designation and its boundaries at a meeting Wednesday morning, although with concerns about criteria that could guide future development.

While residents at the meeting overwhelmingly supported the designation, a major property owner in the neighborhood, the Durham Rescue Mission, wants to secede from the proposed historic district. The mission owns 13 properties in the neighborhood, including five historically contributing structures and several vacant lots in the 1200 block of Worth Street and Morning Glory Avenue.

“We want to be sliced out somehow,” Rob Tart, the rescue mission’s chief operating officer, told the HPC. “We don’t want to be part of it. It’s onerous. It doesn’t help us accomplish our goals of serving homeless people. This will not help what we’re trying to do. We don’t think it’s profitable or helpful.”

However, what the rescue mission is trying to do is unclear. Tart acknowledged the nonprofit, which has been in the neighborhood since 1974, has no concrete vision for its properties, only to say it doesn’t include single-family homes. He also said he had not read the design criteria, only that he had been “briefed on it.”

“But we have no desire to build what you want us to,” Tart told the HPC. “You’ll leave those lots empty. Nothing will happen on those properties, because we’re not going anywhere.”

Since the mission is a nonprofit, it does not pay property taxes. It has assets worth $23 million, according to its 2014 federal tax statements. The mission CEO, Ernie Mills, earns nearly $150,000 annually. Tart is paid $110,000 per year.  Download 2014_DurhamRescueMission

Vacant lots provide an opportunity to strengthen the fabric of a historic neighborhood, said Cynthia de Miranda of MdM. “They can help reestablish street patterns. They can enhance what has been lost.”

Lisa Miller, a senior planner and urban designer for the city, told Tart that multi-family housing could be built in the historic district, as long as it’s “not a big block of apartments of monolithic faces to the streets.” For example, after several design iterations, the Greystone apartment complex in historic Morehead Hill was ultimately approved by the HPC.

“This isn’t hamstringing or forcing someone to build single-family homes,” Miller said. “There is a lot of leeway but you do have to hold on to basic elements of building placement and design.”

Without a local historic designation and its associated design criteria, the Golden Belt neighborhood could be very much in jeopardy. The widening of Alston Avenue — construction is scheduled to begin in August — threatens to divide the eastern and western portions of the neighborhood.

“We see this local designation to give the neighborhood some leverage to be the walkable, integrated, inclusive community we want it to be,” said Mel Norton, who lives on Wall Street. As part of Durham Congregations and Neighborhoods, she has conducted extensive research on gentrification in the city. “I’m afraid we’ll see what’s happening in Cleveland-Holloway happening here” — teardowns replaced by “bigger non-descriptive homes that don’t relate to the neighborhood.”

And with the its proximity to downtown, former Golden Belt resident John Martin said, the neighborhood “is still very fragile. “If you don’t do this, you’ll start seeing gentrification in a bad way, people tearing down mill houses that can be protected and preserved.”

Construction and renovation projects by the nonprofit Habitat for Humanity and Scientific Properties, which purchased the old factories and several blighted homes, have kept prices modest, often under $150,000. But the asking price for a new house on Worth Street is $295,000.

“There are already high development pressures that will increase over time,” said Ben Filippo, executive director of Preservation Durham.

Maintaining connectivity on the east and west sides of Alston Avenue is “essential” he added, and that tax breaks for preservation could help achieve that goal.

“If we can’t include those residences — the working class housing-stock that Durham was built on — if we don’t provide incentives to protect that,” Filippo said, “we are doing a major disservice to our residents.”

The issue will go to the planning commission in June, and ultimately to City Council.

1900: Julian Carr begins construction of the cotton mill and bag factory, plus the first phase of the village

1996:  The district boundary increased to add a building at the southeast corner of East Main  and North Elm streets. The building has since been demolished but the parcel remains in the district.

DRM is a bad neighbor, a poorly-run charity, and religiously dogmatic for those who stay there.

Those wishing to donate money to a charity to help the vulnerable would be much better served giving their money to Urban Ministries Durham.

And for perspective, Cleveland Holloway is now on par with Old North Durham and Old West Durham in terms of pricing. We haven't caught up with Watts Hospital Hillandale, Duke Park, or Trinity Park yet. So yes, while prices in Cleveland Holloway have increased dramatically, so has the rest of Durham - including Golden Belt.

Can you point to any more information on the expansion of Alston Avenue that you mentioned beginning in August? Thanks!