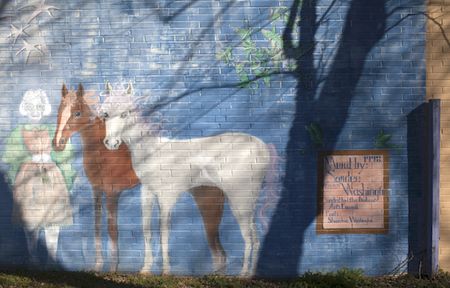 A mural on the side of the strip mall was painted by Sandee Washington in 1998. Photos by Lisa Sorg

Ann Woodward strolled down the alley behind the threadbare Lakewood Shopping Center, admiring the broken concrete and chipped brick; the rust, dilapidation, and decay.

“This is my favorite part, the back,” said Woodward, owner executive director of The Scrap Exchange, which is nearby. “It’s looks like New York City.”

Her eyes, hidden behind large, round sunglasses, suddenly spotted something lying in the dirt.

She snatched a crumpled dollar bill, straightened it and held it over her head. 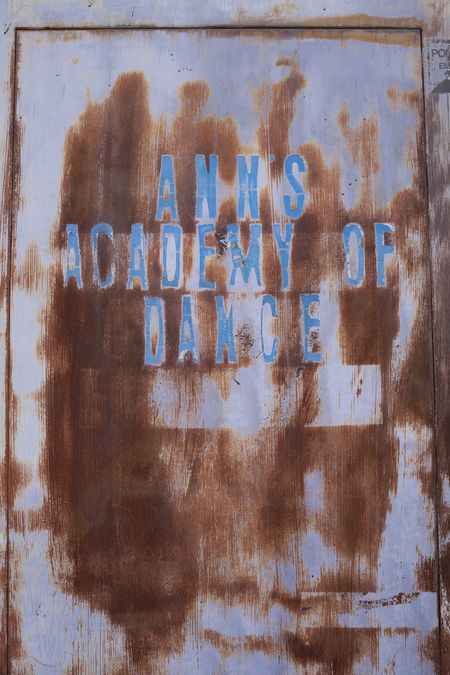 On the second floor in the rear of the strip mall, a former dance studio.

Woodward and the board of the 25-year-old reuse and creative arts store plan to purchase 10 acres of the Lakewood Shopping Center, including a largely vacant 82,000-square-foot strip mall and its parking lot, on Chapel Hill Road. The property, owned by Fund-15 LLC out of Cornelius, North Carolina, encompasses the buildings and land north of the Food Lion building, which has separate owners.

The vision, Woodward said, is to redevelop the area into a creative reuse district that would include a sculpture park, a mall made from shipping containers in the parking lot, and leased, affordable space for local businesses, nonprofits, arts organizations (yes, there’s a stage inside), and restaurants in the former strip mall.

It would complement the existing Scrap Exchange store in the old Center Theater building, which the nonprofit purchased in 2014. The Scrap Exchange also received a $5,000 grant from the Durham Soil and Water District to dig up 2,000 square feet of asphalt parking lot and replace it with trees and green space. 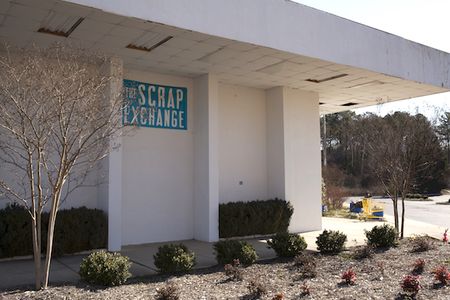 “I’m a reluctant servant to this,” Woodward laughed. “I want to do my little job. But we’re confronted with the need. People need low-cost resources and jobs.”

The Scrap Exchange would charge $9 to $16 per square foot, far below the downtown rents that are approaching or exceeding $35 per square foot. Those prices are pushing small enterprises to urban neighborhoods within a mile or two of the city center. In fact, Woodward said, El Centro Hispano will be one of the district’s first new tenants. The nonprofit will be ousted from the Carpenter Building, which is slated for demolition as part of the new police station project on East Main Street.

(Makin' Choices and Belle Amour are the only two current tenants in this portion of the shopping center.) 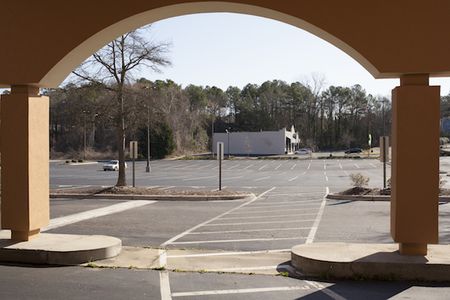 The Durham Co-op, the Cookery and the Southern Documentary Fund went to the West End; Ponysaurus got in on the eastern border of downtown before the gentrification started in earnest.  Lakewood, in southwest-central Durham, has long been thought to be next for the development frenzy. But with The Scrap Exchange’s substantive purchase, it’s possible that this racially and economically diverse neighborhood will thwart the displacement that often accompanies gentrification.

“It’s about getting community assets in public hands,” Woodward said. “A lot of displacement is happening.” 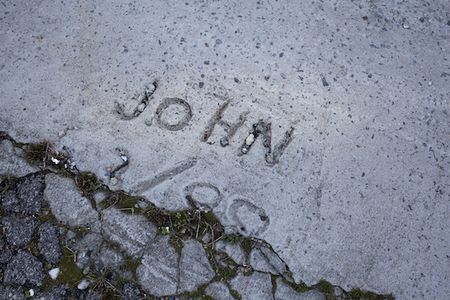 In fact, the Scrap Exchange wound up in Lakewood because of displacement. It was housed in Liberty Warehouse until the roof caved in — a result of neglect by Greenfire, then the building’s owner. The historic tobacco warehouse has since been demolished, with apartments under construction on that spot. In 2011, the shop then headed to the Cordoba Building near Golden Belt, a complex that’s also being sold. In 2014, The Scrap Exchange then purchased the old Center Theater (which by 1966, had left its downtown location) and 2.4 acres, which now includes a community garden.

The most recent acquisition has been convoluted. After two deals fell through, Woodward found a statewide funder — confidential until the papers are signed next month — willing to provide a bridge loan to The Scrap Exchange, with more financing from equity investors and a bank. 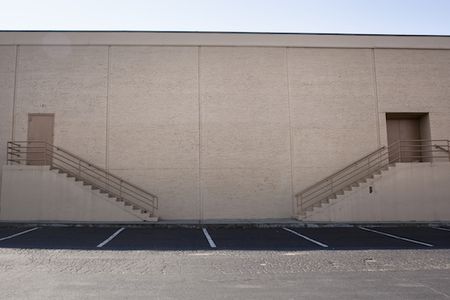 The project would complement local business owners who are already are encamping along Chapel Hill Road; Rhys Botica, who owns the Surf Club, The Federal and The Criterion, bought an old laundry; interior designer Heather Garrett purchased a nearby brick building. Phoebe Lawless is considering a new venture in the old Davis Baking building.

And it’s clear that local businesses attract people from beyond the neighborhood: More than 125 visitors from throughout Durham and the Triangle, attended the grand opening of The Historic Tuba Museum last weekend.

However, monied real estate interests are also circling the neighborhood, Woodward said, with developers eyeing five acres owned by The Rescue Mission that lies behind the shopping center. (The Scrap Exchange owns one acre of land that is zoned residential; it hopes to partner with a nonprofit to build affordable housing there.)

“We want to have diversity in the fabric of this place,” she said. “How does it connect to this neighborhood?”

Behind the shopping center, a steep, tree- and vine-covered hill leads from the alley to Jersey Street. Desire lines — dirt paths created by people heading to the shopping center — streak the incline. Trash and tires dot the landscape, but Woodward sees only opportunity. Two loading docks would make it easy for businesses to receive and ship goods. The rear doors of the stores would be as welcoming as the front.

“We’ll develop it so the back is a destination,” Woodward said.

Then she stuck the dollar bill in her pocket. 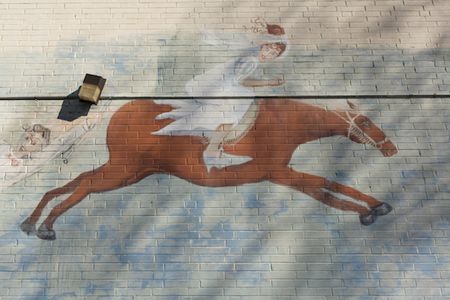 great news. i've lamented the way the absurd expanse of parking lot emphasized the absence of activity. it's easy to see the advantage of a runoff pond with tree buffer in the low (west) corner. or some nod to history with a outdoor carousel/pool. and I must mention the tremendous benefit the Simonetti's provided by maintaining a nice looking establishment along a sometimes patchy/derelict stretch of street.

As someone who lives around the corner (and an architect) I am so excited at the possibilities!

Exciting for sure! I do want to point out, though, that Ann Woodward does not own the Scrap Exchange. She is the dedicated, visionary executive director of the 501(c)3 nonprofit organization.

Great story. I had heard that this was the next neighborhood for opportunity (like the Geer St. area). Now I have some facts. Sounds good for everyone. I visited the Scrap Exchange at Lakewood for the first time a couple of weeks ago. You couldn't help but notice that most of the shopping center is a bit of a wasteland at the moment while the Scrap Exchange was quite busy. We are fortunate that this city has so many visionaries.

You're right, Emily. That was sloppy of me. I have corrected her title.

As the former owner of Tutor Time Child Care, located in Lakewood for the past 20 years, I applaud the vision of the Scrap Exchange. I hope the revitalization of Lakewood will encourage the success of the current businesses who remain in Lakewood as well as the growth of new businesses to come

There is already frequent bus service to the shopping center via GoDurham Route 10 (every 15 minutes Mon-Sat until 7pm), so there is already an excellent affordable transportation option to get there.

I think this sounds very exciting. As a Durham native, I remember weekly grocery shopping in Lakewood, shopping at Thalhimer's, the candy store, whose name I cannot remember, Grants, Woolworths, etc. My father used to talk about the amusement park that was once there. The decline of that shopping center has been quite disappointing. I agree that whatever is put there, needs to service the entire community.

After all that (the amusement park) in 1960 it converted to a strip mall, before the term was used in NC. My earliest frequent visits there were to the first Kroger many of us had seen in NC. It may have opened simultaneously with the one on Hillsborough Road. If there is a genealogy of grocery store chains, this was the ancestor of the store now on Southwest Durham Drive, probably the most functional Kroger in the Western Triangle (based on complaints about other ones). I also knew about LSC from the Durham native who brought me "up to speed" on cars in my 20s. (Grew up in a carfree household and didn't own one until grad school). He told me of borrowing a Chevy Corvair -- after Ralph Nader's "Unsafe at Any Speed" condemned it as lethally unstable -- and taking it to Lakewood in the middle of the night. It was the biggest parking lot they could find in Durham. "We did every kind of donut," he told me, "and we never could get it to turn over." [See https://en.wikipedia.org/wiki/Doughnut_(driving)]. This is a shopping center that deserves a new vision for the 21st century, and it's wonderful to see that a great community non-profit might get to implement it.

Hearing about the use of shipping containers made me think of The Yard in San Francisco. This could spawn some inspiration: http://theyardsf.com

shipping containers make sense in a port city, and perhaps in efforts at creative reuse. could an equivalent focus be made with the asphalt? also, as long as I'm scrap exchanging ideas, the bank separating the backside from that neighborhood would make an incredible skate board park with bowl shaped curves in switchback progression with pedestrian access intersecting.

This is the most exciting thing in development news that I've read in a long time. What a great vision for bringing together the existing community and encouraging new growth with a nod to the history of this place. I hope the Scrap Exchange will call on community members to help where we can!

Is there an update to this story now (6/2016)? Did the statewide funder come through in April as referenced in this article? Thanks!