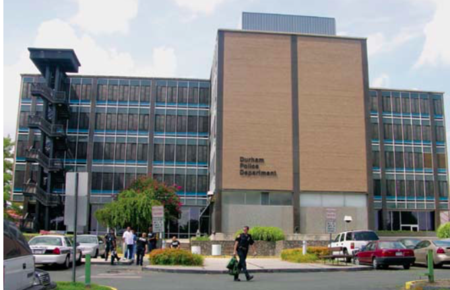 Here’s a morning mental exercise: This fall, Durham County is expected to place a bond referendum on the ballot to help pay for a $40 million major renovation of the Main Library downtown. The bond will likely pass — let's hope — because libraries are beloved, vital community resources.

Now, if $81 million in funding for the new Durham Police Department were put to a bond referendum, would voters pass it? I’m not so sure.

Realistically, it’s doubtful that the city will cancel the deal. It’s just too far in the process, with Council approving the architectural designs last month.

However, there’s an opportunity here: The current headquarters at 505 W. Chapel Hill St., is prime, city-owned real estate for affordable housing. The building sits on 4.1 acres of land, 3.35 of it surface parking — quite a waste.

It’s next to the bus station and across the street from the Amtrak stop. In other words, ideal for low-income households, especially those earning less than $25,000 a year. There’s a serious shortage of housing for the very poor, a point that Karen Lado of Enterprise Community Partners underscored to Council last week in her presentation about a proposed affordable housing strategy.

One of the goals Lado laid out was adding 300 units citywide over the next five years for these households — “particularly near transit lines and rapidly appreciating neighborhoods.”

There needs to be a public discussion on which is the wisest course to develop the land for this purpose: a City/Durham Housing Authority partnership, a nonprofit, such as Self-Help, or a private developer, albeit one that is required to allocate a percentage of the units as affordable.

(That type of “inclusionary zoning” is illegal in North Carolina on private land, but the city has more latitude to place covenants on its parcels.)

To add urgency to this situation, consider that over the next five years, subsidies on 1,240 of 6,100 privately owned, affordable units in Durham will expire — 930 of them by the end of 2017. These units have generally been subsidized via low-income housing tax credits and Section 8 programs. The apartments/homes, many concentrated in Northeast-Central Durham, could become market-rate, thus creating an even more severe housing crisis for the poor.

Need more urgency? Landlords are bowing out of the Section 8 program because they can charge higher market rates without having to navigate the inspections and paperwork from the Durham Housing Authority.

There also needs to be a public discussion about the fate of the building, which needs at least $4 million worth of rehab. At one time, the building, which in the late 1950s, originally housed Home Security Life insurance company, looked swanky, with a lot of glass. But now, of the Mid-century modern style buildings downtown — the Durham Hotel, the old Jack Tar motel, for example — DPD HQ is the least attractive because of the tinted windows, security grating and other fortress-like architectural details that accompany a structure devoted to law enforcement. (O’Brien/Atkins, the architects on the new DPD HQ, have been directed: No fortress on East Main.)

Durham Beyond Policing has valid concerns about the $81 million expenditure. But I’m ready to cry Uncle and acknowledge that a new station will be built. Yet in doing so, we should consider what can be gained on those four acres on West Chapel Hill Street.

It would be interesting if a contingency of the police station funding could be that the original building be renovated into affordable apartments through the housing authority, or even better condos that the city could partner with self help to back mortgages on so that low income residents could actually own a home and begin building equity in a prime real estate area. Along with developing the rest of the parcel into maybe a park? Because our green space is quickly dwindling in Durham and the city doesn't seem to be interested to devoting funds for securing prime park space that isn't in the flood plain i.e. unusable any time it rains.

Renovation is not inherently cheaper than new construction. In fact, it is often more expensive. Also, who says the shapes and layouts of a police office building parlay into apartments?

Lastly, there is an extraordinary amount of wasted land on the Police HQ lot, which could host an addition to the existing building, or a larger new building.

I want to say all the best to the implementing authorities.

Tear the building down and turn the lot into a park. Think about it: Four acres of greenery right smack dab in the middle of Durham, within easy walking distance of downtown and the Morehead Hill, West End, Burch Avenue neighborhoods.. That's the highest and best use of that land that I can think of.

I agree that it is important not to understand 'development' as a lasting investment but as a PR tool for construction and real estate.