Bull City Rising
About Archives @bullcity
Election 2016, Wendy Jacobs: "'I'm proud of the fact that I take action and actually get things done"
Election 2016: Brenda Howerton, "You have to learn to work at consensus."

Election 2016: Michael Page, "We have too many people in the jail." 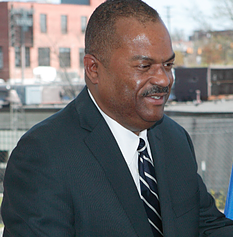 “We can be more hands-on, expecting progress and inspection reports,” Page says of the jail, “but I’m not sure what more we can do. I’m searching for ways to manage without micromanaging it.”

The entire criminal justice system, and its connections to poverty, jobs and education top Page’s priority list if re-elected.

Page says the commission needs “reported incidents,” and not just from social justice advocates such as the Inside-Outside Alliance, who have long filed complaints about inmate treatment. “We’re not  hearing them from inside the administration of the jail.”

However, it’s hard to imagine problem detention officers owning up to their behavior. Two detention officers were fired late last year and charged with assault after they roughed up an inmate. The incident was captured on video surveillance cameras.

“I’m glad it was caught on tape,” Page says. “We won’t condone that happening.”

Part of the criminal justice problem, Page says, is also a social justice issue: the number of nonviolent offenders in the jail, some of whom are too poor to post bond. And state funding cuts have forced local courts to cut positions that helped expedite inmate processing. Misdemeanants could participate in work release programs, rather than stay in jail.  “We had a clerk to support getting these warrants moving so guys aren’t in the system,” Page says. “If the county can help support a new effort or one like that one — our jail should be half full.”

Page led the My Brother’s Keeper project, which directly serves low-income, disadvantaged young men of color, many of them at-risk of becoming involved in crime. Although it took nine months longer than planned for the assessment phase of the program, it is now ready to be implemented. “I was disappointed that it took longer, but it needed to be done carefully,” Page says.

One of the services will be mentoring programs for young men. “These are 18, 19, 20 year olds who can’t find a job or stay out of crime,” Page says. “They said we need adult leadership to help us, to show us. These are bright, articulate young men who deserve an opportunity for a quality life. With appropriate support they can make it.”

Poverty and lack of job opportunities in part, feed the criminal justice system. This is why, Page says, economic development is “critical for this community.” While Durham has attracted high-wage tech and life science jobs, there are fewer opportunities for workers with associate’s degrees, certificates or even just high school diplomas to earn a living wage.

“Education is a real issue in this community,” says Page, who served on the Durham Public Schools Board of Education from 2000 to 2004.

The Durham County Commission appropriates the local portion of the funding, but the DPS board determines how and where it will be spent. Page says the budget issues — including disproportionate spending on central administration as compared to the classroom  — “accumulated over the years.”  For example, several financial irregularities emerged under the tenure of former superintendent Eric Becoats, who resigned in 2013, after the board investigated his personal use of a district credit card. Current Superintendent Bert L’Homme “has inherited this issue, and it’s unfortunate he has to address it,” Page says.

Any funds that don’t directly benefit the classroom should be especially scrutinized, Page says. Some central office positions could be eliminated or scaled back.

Even transportation budget could be trimmed. Because of DPS’ school choice policy, there are more bus routes that cross the county, and thus additional fuel and personnel expenses.

“At one point we talked about eliminating transportation for after school, he says. “I thought that was a travesty. But we have to look at the classroom from 7:30 to 3:30, and make that the priority. We have to go back and line by line, look at where we’re overspending.”

Page says his notable votes include approving a pay raise for teaching assistants from local monies — while the state was cutting public school funds. “If we had not pushed that effort, employees wound’t have gotten a raise. Their salaries are so low and yet they provide critical services.”

In the 2012, a controversial vote in favor of the 751 South development nearly derailed his local political career. However, Page says, he does not regret approving the project, a large mixed-use development in the Jordan Lake watershed. “The clean water issue concerned me the most, but that wasn’t proven to me that it would be a problem.”

“I don’t see the downside of 751,” he adds. “I’ve gone to other cities and seen people flocking to these projects. I don’t think we have made a mistake in that regard. The development is something different; families want sustainable, walkable communities.”

The public outcry over 751 divided the commission and to some extent, Durham — although a substantial number of residents, concerned about the environmental impacts of the project, opposed it.

“I’m willing to listen,” Page says. “I’m not stubborn. I will work with people. But I won’t be dictated to by a certain segment of community. We’re five people, and we have to speak on the behalf of the entire community.”