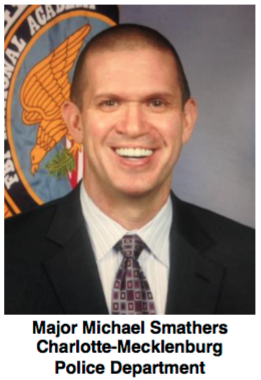 The city has posted the  finalists’ resumes. You ask questions in person at a public forum on Wednesday April 6, from 7 to 8 p.m. at Durham City Hall. The Q&A will be broadcast on the Government TV channel (8 for Time Warner, 99 for AT&T U-Verse), or livestreamed via the city’s Facebook page and website.

You can submit questions through April 4 via 919-560-1200, the city’s Facebook page, the city’s Twitter feed and by email at PublicAffairs@DurhamNC.gov

After Major Michael Smathers of the Charlotte-Mecklenburg Police Department reviewed the dashcam video of fellow officer Randall Kerrick, he knew that the evidence looked damning.

“I initially had concern the very first time I saw that video,” Smathers testified in a deposition last year. “But I watched it dozens of times that day … and that feeling never left me.”  Download Deposition of CMPD investigator Michael Smathers

In 2013, Kerrick, who is white, shot an unarmed black man, Jonathan Ferrell, 10 times, killing him. The officer was charged with voluntary manslaughter, but a jury deadlocked on the case, and he was not convicted. Kerrick resigned from CMPD last October.

At the time, Smathers was over the Criminal Investigations Bureau, which deals with all of the violent felony crimes, including those by criminal allegations against police officers.

For many Durham residents, particularly in communities of color, it is notable that Smathers, one of two finalists for the chief’s job, was unafraid not only to examine the evidence against a fellow officer but also to recommend charging him with a serious crime.

“It’s upsetting to charge a fellow officer,” Smathers said in his deposition, “and it was historic in the history of our police department to do it.”

Smathers’ experience in a diverse city could address some of Durham’s concerns about the next chief, especially his work in community policing, clearance rates and police reform. Smathers, who currently oversees the Field Services Division, also managed the armed robbery and sexual assault units, worked in SWAT and officer training, and supervised patrol officers.

Smathers discusses several of these reforms, including allowing jurors to see and hear police interviews, in transcript of a DOJ podcast. “We just continued to hear from jurors and from our prosecutors that it would enhance their confidence in the work that we were producing and we were testifying to if jurors and prosecutors could hear the interviews themselves. So we thought, why not. There is no compelling reason to not share what goes on in the interview room.”

Smathers was also the commander of the Crisis Negotiation Team, and that experience could prove helpful in Durham, Over the past three years in Durham, several incidents, including the high-profile, officer-related shooting of Derek Walker, who was threatening to commit suicide with a gun in CCB Plaza downtown, raised concerns about the use of force against people with mental illness.

However, there were minor questions about Smathers’ handling of the policing at the 2012 Democratic National Convention — although some decisions, made at the federal level, were beyond his control. That year, Charlotte had received a $49.8 million federal grant to provide security at the convention for 6,000 delegates and 30,000 visitors, as well as the city’s residents.

Smothers was the commander of the Mobile Field Force Platoon, and led policing at various demonstrations and crowd management assignments. The event was largely peaceful, although 25 people, mostly demonstrators, were arrested over the three-day event, including 10 undocumented immigrants who were protesting the convention.

An U.S. Department of Justice Inspector General’s report noted that “some arresting officers were inexperienced in the protocols and procedures for handling evidence in a mass arrest environment.”

CMPD responded that "All arresting officers were training in the protocols and procedures for handling evidence in a mass arrest environment. However, the practical application in the field was a lesson learned."

Charlotte elected officials had passed a law giving the city manager the power to declare certain gatherings “extraordinary events.” That designation marks off part of the city as an “event zone,” and gives police broad powers for search, seizures and arrests — all constitutional issues.

(The U.S. Department of Homeland Security had also designated as a “National Special Security Event.” Similar laws were enacted at both political parties’ 2008 national conventions.)

On the financial side, the Inspector General’s report found that the city largely complied with the grant requirements, but did receive “reimbursements for $79,311 in unallowable personnel costs. The city also received $53,676 to purchase two sport utility vehicles that it did not modify in ways certified to the BJA as being necessary, which served as the justification for the purchase. As a result, we recommend OJP remedy the $132,987 in unallowable or unnecessary grant reimbursements.”  (CMPD agreed with the findings, except for the one regarding sport utility vehicles.)

In the past 20-plus years, Smathers, who is white, started as patrol officer, where, according to his resume, he spearheaded an aggressive community outreach to Latino communities. As captain of the Charlotte Eastway Patrol Division, an ethnically diverse area of the city of 809,000, he received a community policing award for “leadership and reducing crime.”

He also supervised the CMPD’s lab and evidence bureau, which is key for Durham. A years-long backlog at the state lab has resulted in suspects being jailed for months in Durham, even more than a year, without being convicted. Durham officials have floated the idea of funding a county crime lab or hiring technicians at the state lab that would work solely on local cases.

And while Smathers was head of the Criminal Investigations Bureau, CMPD reported a homicide clearance rate of 81 percent in 2014, compared with Durham, which had a clearance rate of 68.2 percent over the same time period.

CMPD has 1,850 officers, significantly more than Durham, which has roughly 500 — and a turnover rate of as many as 60 a year.

Smathers clearly wants to be a chief — somewhere. Two years ago, he was shortlisted for the position at Cedar Rapids, Iowa. Yes, he was willing to move to Iowa.

Thanks for the overviews on the finalists. It sounds like we have two very well qualified finalists.