Bull City Rising
About Archives @bullcity
Election 2016: Ellen Reckhow "We need to prepare our young people for jobs."
Election 2016: Heidi Carter, "I care deeply about our community and want to help Durham thrive"

2015 included the most violent month since Durham Police kept statistics 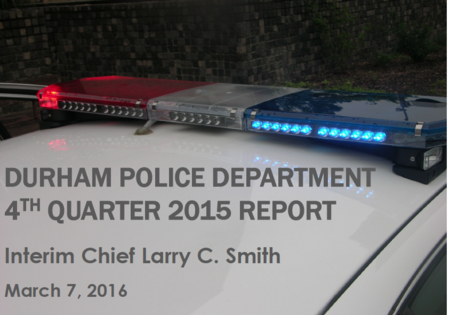 The most violent month in Durham since the city police department starting keeping statistics occurred in January 2015, and it set the tone for the rest of that year.

Overall, homicides were up 68 percent from 2014, jumping from 22 to 37. (The number 42 has been bandied about, but five of those homicide were later determined to be justified.)

Within the violent crime categories, the number of reported rapes — 101 — was unchanged, while robberies rose 12 percent, and aggravated assaults, at 23 percent.

Smith said that violent crime was concentrated in two housing projects — McDougald  Terrace, in East Durham, and Cornwallis Road in the south. Police targeted those areas, Smith said, “knocking on doors and making significant arrests.” As a result, he added the crime rate dropped.

When suspects were named or police made an arrest, 82 percent were black, 9 percent Hispanic, 8 percent white, and 1 percent Asian.

Guns, not surprisingly, were used in the majority of violent crimes: In nearly two-third of robberies, the suspect used a firearm. And 44 percent of the 1,336 aggravated assaults involving multiple victims also involved guns. “This is the result of people shooting at occupied dwellings,” Smith says, “often ongoing disputes.”

Smith introduced maps as a new feature of the quarterly presentations, which show that nearly half of the violent crime in Durham occurs in 13.5 percent of the land mass. The department plotted the homicides to illustrate where they occurred. 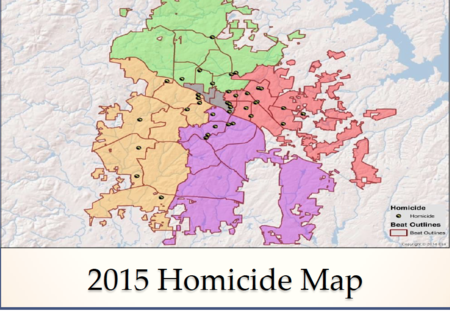 BCR built a similar map this last December,  and it includes the weapon used and other information, although this map includes the homicides that have since been ruled to be in self-defense.

Violent crime clearly occurs in East Durham, but there were five murders even in the western fringes of the city. At least one of these appeared to be the result of domestic violence; in fact, 10 of the 37 homicides were attributed to that type of crime.

This brings us to the victims, often lost in the haze of numbers and percentages. African-American men and boys are disproportionately harmed: They compose roughly two-thirds of violent-crime victims.

This compares to whites, who make up 15 percent of violent crime victims and Latinos, at 17 percent.

Latinos are victimized, in part, because the perpetrators count on their being undocumented, and thus afraid or unwilling to report a crime. “We have an ongoing issue in city where Latino victims are targeted,” Smith said, especially in apartment complexes where many of them live: Carver Pond and Chalk Level Road (north Durham), LaSalle Street (near the Duke Medical Center), and Garrett Square (southwest Durham).

The turnover within DPD is troubling, a loss of about five officers per month, or 60 a year. That means within a full staff of 512 officers, the churn is 12 percent.

The reasons, Smith said, “it runs the gamut.” For example one officer recently went to Cary PD, while another left the profession altogether. To some extent, new recruits are offsetting that turnover, which, Smith said, should improve response time to the increasing number of Priority 1 calls (the most urgent type) and the number of foot patrols.

If there good news to be gleaned from the report, since 2001, the overall crime trend has sloped downward, even while the county’s population has increased more than 20 percent.

And your car is safe(r). Property crime is down 4 percent, including motor vehicle theft, burglaries and larcenies.

And drug arrests dropped 25 percent from 2013 to 2015, which could be attributed to fewer arrests for minor marijuana possession. “We’re fans of the diversion program,” said Smith, referring to a new program unveiled in 2015 that directs nonviolent offenders to programs, not the court system.

There is still concern that DPD could be circumventing the written consent policy, enacted last year, and using more probable cause searchers. David Hall, attorney with the FADE Coalition and the Southern Coalition for Social Justice told Council during the public comment period that probable cause searches have increased by 159 percent.

“I wish we could have the back and forth you [the Council] has with the chief, so we could address issues in a more substantive way.”

Why does the city not use cameras in the violent crime area's. In England their use in the heaviest crime area dropped the crime by 50 percent. And this was years ago.

The are costly to monitor and their effectiveness is questionable.

compared to having officers drive around in vehicles all day?