Scrutinizing our schools: A decade later, spending and enrollment up, but fewer teachers

This article was reported by and written with Alex Modestou.

One of the lingering questions for us at BCR after our week-ago series on Durham Public Schools performance and finances was how our analysis held up beyond the single 2014-15 point-in-time we analyzed.

So what happens when we look further back? DPS’ own Comprehensive Annual Financial Report sheds a bit more light on the picture.

Once we control for the effects of inflation and increased charter outflows, we estimate that this translates to nearly $50 million in real (i.e., non-nominal) spending. 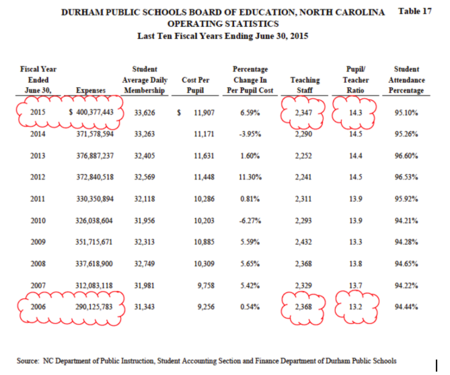 While there are about 2,300 more students in DPS in AY2015 than AY2006, however, the total instructional staff numbers are actually down -- with 21 fewer teachers in the just-concluded school year.

More students, fewer teachers, but a one-sixth increase in spending. We think that as DPS prepares to undertake a significant scrutiny of its budget, it’s more data suggesting that a very close look at administrative spending vs. classroom spending is needed.

In her 2015 book The Prize, Dale Russakoff tells the story of how Facebook-chairman Mark Zuckerberg's $100 million donation to Newark schools was spent. The bottom line: in the absence of a clear plan for how to use the money to meaningfully improve student outcomes, the infusion of cash to the public school system was largely unsuccessful.

When discussing her research on NPR’s Fresh Air, Ms. Russakoff summed up one of the issues she observed this way:

The district schools have a lot of legacy costs, and...there needs to be some kind of - almost a forensic accounting of where the money in the central office of the school district is going so that more of it gets to the classroom.

Jonathan Knee, a professor at Columbia Business School writing for the New York Times, put it like this:

No such rule, unfortunately, constrains politicians, unions, administrators or even parents when it comes to the organization and operation of public education. “The Prize” serves as an invaluable reminder of both how far from this standard we have strayed in determining how we educate our children and how much more than good intentions are required to meet it.

Over the past 10 years, Durham taxpayers have more than insulated Durham Public Schools from the effects of state cuts to education with very strong local funding from property tax.

In its Comprehensive Annual Financial Report (CAFR), DPS documents its revenues and expenditures along with several key metrics about the district’s operations, including the number of students it serves and the number of teachers it employs. As shown above, table 17 of last year’s CAFR tells an alarming story about the relationship between the budget, the number of students, and the number of teachers over the past ten years. Despite serving an additional 2,300 students and having an additional $48 million to spend on their educations, DPS actually employs fewer teachers now than it did a decade ago.

In the hierarchy of spending priorities, we are not aware of any major policy initiative implemented in the past ten years that would be ahead of hiring enough teachers to keep pace with student enrollment growth.

DPS had the money to do that and much more, but it doesn’t appear that this happened.

To actually move the needle on academic performance, research provides a short-list of strategies DPS could implement with that much additional funding:

While many on the school board claim that DPS is doing more and more with fewer resources each year, their records indicate otherwise.

With an election on the horizon -- including both the school board that proposes DPS’ budget, and the Board of County Commissioners that’s the final arbiter of local supplemental school spending -- it’s a crucial time for Durhamites to ask these questions of elected officials, system staff and those candidates who seek to serve on two downtown daises.

We don’t doubt that the individuals in these roles are clearly very dedicated and well-intentioned. To that end, it would be interesting to understand more about the changes in DPS’ spending, given the apparent lacuna around schools spending.

Ultimately, more than good intentions are required to actually improve student outcomes. Elected boards and their staffs must possess the financial and managerial wherewithal to translate their priorities into actionable strategies and to follow through with implementation.

This issue is not unique to DPS; in fact it plagues local governments and other organizations nationwide. But that does not mean that Durham should not work to overcome it.

This is a really terrific series of articles: should be required reading for every citizen of Durham, whether or not they have kids in school. I'm amazed that a weblog is getting this done, rather than a local newspaper (shame on the Herald in particular). Might I suggest a link to all six parts of the series for easier access?

Terrific coverage, BCR. I hope this will lead to substantive discussions by the school board and county commissioners about how DPS is spending money.

I particularly hope they will look at areas that stand out such as transportation costs that are far above comparable districts - probably driven by the presence of 23 magnet schools out of about 50 total DPS schools. DPS seems to be in love with the concept of offering parents choice of schools, but at what cost? Instead of spending millions for diesel for what appears to be essentially a doubling of bus routes, what if that money was spent on neighborhood schools, or more teachers, or Pre-K?

Although, look at Wake County. They bus, don't have neighborhood schools, and don't seem to have this huge issue.

Is this as simple as them hiring someone to re-optimize their bus routes? Are the buses older and thus require more maintenance? What is going on here? It's certainly not that Durham bus drivers are in any way highly-paid, that's for sure!

@Rann - you bring up a great point.

There's a lot of data optimization that could happen at DPS if they were open to it. For example, the way they choose where and when to build new schools, how they create districts for said schools (it's not based on race, SES, poverty, radius, growth, it's seriously - this has always been the base school zone). Look at the number of people who apply to be in the montessori magnets - last year over 500 for 50 spaces.

HRM! That data tells me they could create new montessori elementary school programs and populate them quickly!

Here's another example - when I signed my daughter up for afterschool I was given a paper form in spanish (I don't read spanish) that I had to fill out and take to the offices on Hillandale RD where I had to pay in cash or check for the after school fee. It's 2016 and I couldn't sign up for after school care online with a credit card. Also, there were two staff members there taking paper applications. I was - as you might expect in the middle of April - the only person who came in to sign up my kid for afterschool.

A good friend of mine runs a whole bunch of data-related summer programs at Duke, involving undergrads, grads, and faculty in data-based research. It's a pretty substantial program, and has already worked with folks like the NC Justice Center. The programs for this year are already set, but this could be an interesting opportunity for Duke-Durham collaboration in 2017. It could have a real impact. I'll get going on that.

Thank you, thank you, thank you for a wonderfully illuminating series.
I'd like to see Durham commit to having a world-class educational system within a decade. Your recommendations would take us a long way toward that goal: universal pre-K, more lower-grade teachers and assistants, and still better pay for teachers.
A couple of caveats, however: There has to be supervision and accountability. The system and individual schools must be free -- and encouraged -- to try out techniques and programs to improve teaching and learning, but every proposed improvement must be supported by evidence: who has used it, how were results measured, how well did it work, what was the rationale, what mistakes were made, and what would the originators do differently next time? And then the innovation must be monitored and measured to be sure it is working, and perhaps modified if not working as intended.
It is not enough to work with kids in the classroom. Home visits -- whether by teachers, counselors, social workers, or nurses -- must be made as much as needed to try to fix problems that prevent kids from doing well in school and to help parents learn to be better parents. (This could open up a whole other can of worms, leading perhaps to classes for parents, in areas of health, nutrition, child psychology, personal finance, job-training, etc. Long-term result: a better community.)
Most of the analysis I have been reading about has been "top-down": so many dollars in this or that program, so many kids measuring up (or not), etc. To get a better grip on reality, we need to study the issue(s) "bottom-up": by looking at individual kids and asking "What -- in the school, the home, or the community -- is keeping this kid from succeeding?"
Our goal should be a school system which prepares every child for his next step, whether that is further training or education, or a real job. We need to follow up on every child who leaves the school -- whether by front or back door -- and be sure that the school (and related services in the community) has done everything possible to prepare him for a successful future.