Bull City Rising
About Archives @bullcity
Scrutinizing our schools: Little of DPS' surplus spending goes to regular classrooms -- so where is it spent?
"Patient has dementia," assault on a female, cruelty to animals and other reasons people are denied gun permits

Scrutinizing our schools: How does DPS allocate classroom and school resources?

This is the fifth in a six-part series of articles scrutinizing Durham Public Schools performance and financial priorities. Today: a closer look at teacher allocation and school leadership services, and a wrap-up to our series. Later today: we'll wrap up our scrutiny with some closing thoughts.

Over the last two days, we’ve seen that DPS’s position of financial strength seems unbalanced in its uses within the system.

For instance, comparatively little of the district’s extra spending on instructional programs goes to the use of regular classrooms, with alternative/special population programs and administrative costs taking a much greater cut. And, DPS’s administrative costs well outrank the three school systems closest to DPS in size.

Today’s we’re going to drill in further to an analysis of classroom and school-level instructional resources -- since most people seem to agree that teachers and principals are the most essential and consequential individuals in a school system, it’s crucial to understand where DPS is resourced at the individual school level.

In the context of the student achievement crisis discussed in the first post in this series, today we’ll explore the following questions:

Although many external factors affect student learning, an adequately staffed force of high-quality professional teachers supported by strong school-based leaders is the foundation a school system needs to provide a sound education for all students.

Yet some of DPS’s other decisions -- on elementary vs. secondary school teaching resources, allocation of per-pupil local teacher funding at some high schools, and principal/assistant principal supplemental funding and staffing levels -- defy as easy an explanation and are worth further scrutiny.

The state provides funding for teachers using per-pupil allotment formulas. If districts believe they need additional teachers, they can use local dollars to fund additional positions.

All told, this represents 847 elementary teachers, vs. 867 secondary school teachers.

Which seems like a reasonable division -- until you look at the state’s formula for funding teachers, versus DPS’ allocation of its local-choice dollars.

On the other hand, middle and high school programs have 193 more teaching positions than the 674 that are funded by the state. The remaining teachers appear to mainly be funded through local spending allocation.

Is it possible that the state allotment for elementary school teachers is sufficient for Durham’s needs? That does not appear to be the case given the disparity in early testing results between DPS and the rest of the state. (As we mentioned in Tuesday’s post, despite the reservations we have about the quality and appropriateness of state tests, they do provide a tool to directly compare performance between school districts.)

End of grade (EOG) exams in math, english, and science results for DPS elementary schools find the most common EOG score to be a 1 on a 1-5 scale -- with one being the lowest score. Statewide, a 4 is the most common score.

This isn’t to say that the extra teaching positions allocated to secondary grade programs aren’t needed; nor do these data include AIG, EC and other programs or instructor work time. Still, it would seem worth further analysis as to whether DPS elementary schools could use additional classroom resources as well. (This disparity is one of the areas where we’d welcome more information from DPS -- and more consideration during upcoming budget processes.)

On a brighter note, thanks to tiered funding at the elementary level, schools with high proportions of economically disadvantaged students typically receive more local teacher funding than lower-poverty schools. As the scatterplot below shows, typically elementary schools’ per-pupil additional local teacher funding increases relatively linearly with the free and reduced lunch qualifying rate in the school. 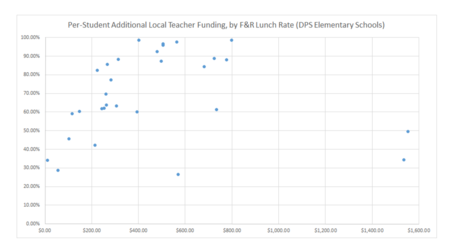 (The two exceptions, at the right side of the graph, are Watts and Morehead, Durham’s two Montessori magnet schools; however, we assume this is due to the presence of Pre-K programs at these, the only two DPS schools with such programs. While this is a reasonable explanation, further analysis would be ideal to ensure there’s not an equity issue with schools that have seen fairly rapid increases in student SES/wealth levels in recent years. No other elementary schools come close to this level of additional local investment, including those where over 90% of students qualify for free and reduced lunch -- but, it’s not clear that the data source for the above graph includes programs like Head Start, pre-K options for EC students, etc.)

Again to DPS’s credit, at the middle school and high school level, by and large, schools with higher levels of poverty receive more local teacher funding. Again, however, two outliers are worth mentioning:

The additional costs of magnet schools may extend beyond the classroom as well. Among the 20 largest districts in the state, DPS has by far the highest per pupil cost for student transportation, $7.5 million more on average than its peer districts.

While we don’t know for sure that magnets are the driver of this, it is surprising given that among the 20 most-populated counties, Durham’s has the smallest geography (298 square miles.)  We’d expect to see DPS’s transportation cost scrutinized not just for the general inefficiencies noted earlier in the series, but also to understand to what extent the presence of nearly two dozen magnets contributes to this cost.

Principal and Teacher Compensation and Turnover

Local salary supplements are a tool the district has to attract and retain high quality staff. Although many factors affect turnover, none is more straightforward than pay. This is a lever that DPS pulls very hard, but the efficacy is difficult to judge.

While DPS funds teachers at rates above state averages, unlike full-rank principals, the turnover story is a very different matter.

One might expect a strong negative correlation between the local teacher supplement and teacher turnover; districts with high local supplements might be expected to have low teacher turnover and vice versa, for instance. This does not play out when comparing DPS to other North Carolina districts, perhaps because even the highest teacher salaries in North Carolina are lower than salaries in nearly all other states.

To bring DPS teacher pay up to the national average, DPS would need to boost teacher pay by an additional $8,000 or so. Assuming the state continues its current funding levels, this would cost Durham County taxpayers about $20 million annually in salary alone.

That sounds like a staggering expense -- yet, we should keep in mind, it’s just about equivalent to the premium Durham spends on central administrative support resources relative to our peer counties (Gaston, Cabarrus, and Johnston.)

Does the high teacher turnover rate here have to do with the fact that we're right next to Orange & Wake counties and both of these would be good options to teaching in Durham? And, in almost any job, middle-management bloat generally makes for more unpleasant experiences for front-line workers--so more asst principals breathing over teachers' backs, demanding reports and documentation that do little to improve classroom teaching but increase make-work to give admins something to do. It's difficult to tell, thus far in the series, what all those extra admins are doing. Very good series though, and much appreciated.

The fact that many Durham schools, especially the high schools, are out in the boonies surely can't help either, though I doubt it's much better in other school districts.

One other thing to look at is how students are districted. I seem to recall that many students in Northeast Central Durham are districted to Northern despite the fact that Southern is much, much closer.

Durham is a fairly dense county, at least by NC standards. Of 100 counties in the state, we are 3rd in population density. That plus the fact that 85% of the county population is within the city limits makes it hard to understand how we could have such a high cost per pupil compared to other districts.

If you look at elementary school districts they resemble bike spokes rather than a wheel. It doesn't surprise me at all that transportation would be a huge cost, the districts and buses are horribly inefficient.

Also, if you attend out of your base school zone and aren't part if a magnet you are responsible for your own transportation.

"Among the 20 largest districts in the state, DPS has by far the highest per pupil cost for student transportation, $7.5 million more on average than its peer districts.

While we don’t know for sure that magnets are the driver of this, it is surprising given that among the 20 most-populated counties, Durham’s has the smallest geography"

Magnets are a big driver of transportation costs - especially considering number of them and the far flung locations of some magnets such as School for Creative Studies on Red Mill Road. This school was modelled after DSA, but instead of being in town is about 9 miles from downtown in a rural area with few residents. Almost everyone has a long bus ride to Creative Studies. If the Creative Studies program had been placed at a more central location such as Brogden, the transportation costs would be far less.

The magnets essentially double the bus routes, with a set of routes for neighborhood schools and a second set for 23 magnets. Do we really need almost half our 50 or so schools designated as magnets? That $7.5 million in extra bus costs -which teach the kids nothing - could be better spent on a more useful program such as pre-K.

I like the post. It very informative especially on Principal and Teacher Compensation and Turnover. Thank you for sharing.