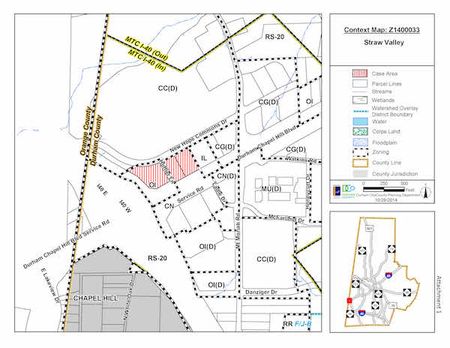 For several years, Straw Valley restaurant was the sole destination in far southwestern Durham, unless you wanted to buy a mattress, or in my case, take the cats to the vet.

At Straw Valley, you could drink coffee or wine all afternoon, lounge on the patio in chaises, all while being shielded from suburbia, the interstate and a nearby Walmart by stands of bamboo. If the weather didn’t cooperate, you could ensconce yourself on a couch in one of the former residences or artist studios.

Eventually, though, Straw Valley closed, as did the Black House, which made a go of it for about a year. Big Bundts and More, a bakery and coffee shop, has since opened in part of the space.

But now the former dairy farm, mid-century modern artists’ colony and restaurant will be reincarnated as a mixed-use development. The Durham Planning Commission will consider a proposal by developer Scott Bednaz, who rescued the property from ruin in 2007, to add to the existing buildings 25,000 square feet of office, 50,000 square feet of commercial space and up to 50 residential units on 4.5 acres.  The meeting is Tuesday at 5:30 p.m. at City Hall.

The proposal will require a rezoning from office/institutional, commercial neighborhood to mixed-use. Bednaz will also be required to pay for road improvements to offset additional traffic in the congested intersections near and at Durham-Chapel Hill Boulevard (U.S. 15-501) and Mt. Moriah Road.

The property is in the planned Patterson Place Compact Neighborhood, a designation created for areas near the proposed light-rail stations. Compact neighborhoods encourage denser development than is traditionally built in suburban areas, and they emphasize walkability. (For certain, right now this area is walkable only for daredevils and adrenaline junkies.)

None of the new Straw Valley apartments or condos (the housing type hasn’t been finalized) will be affordable. City staff calculated that with the addition of these market-rate units, the percentage of affordable housing will decrease to 22 percent.

The architectural style of the new buildings will be mid-century modern, to complement the existing structures created by artists Ormond Sanderson and Robert Black in 1959. The two operated an artists’ oasis on this old dairy farm, back when this part of the county was rural. By the 1980s, though, Straw Valley succumbed to the encroachment of suburbia and I-40.

I always thought it audacious and applaudable not only that Bednaz would buy the property, but also that business owners would launch downtown-like ventures in the nether regions of Bigboxlandia. You had to drive in godawful boulevard traffic to Straw Valley or take the No. 10 DATA bus, which at the time, had a route so inefficient it could take more than an hour to run the route. (The TTA bus was no better.)

It is unfortunate that market pressures—I’m speculating here—preclude affordable housing on the site. Even though the area is above the 15 percent benchmark, it’s uncertain if the housing that is currently affordable will be preserved.

The other notable items on the commission agenda are the public hearings about the compact neighborhoods, including Patterson Place. The anti-light rail crowd spoke out against their respective compact neighborhood plans at information sessions held last year, even though this is a planning tool not a GoTriangle decision. (I remember someone saying, “We don’t want skyscrapers.” The only skyscraper in Durham is already in the suburbs.)

However, even if the light rail line is never built, this is a planning mechanism to decrease sprawl and to make the ‘burbs more walkable. With more people-friendly ways to travel, maybe Straw Valley, in its next life, will make it.