Bull City Rising
About Archives @bullcity
We bulldozed the trees for a Walmart Supercenter. It's closing. Let's tear it down for soccer fields.
Scrutinizing our schools: About BCR's week-long focus on Durham Public Schools performance, spending 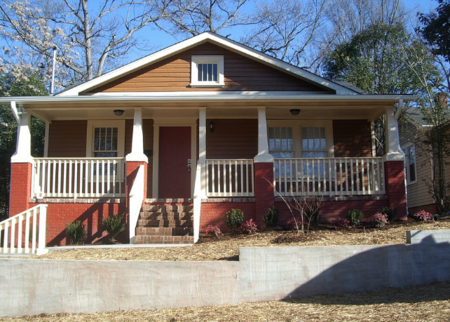 The agenda for Tuesday night’s City Council meeting is thin (although Thursday’s work session is a doozy—bring trail mix and coffee), but two items related to affordable housing are worth applauding.

As many as 26 new affordable houses could be built and/or renovated in Northeast-Central and Southwest Central Durham if the Council approves $682,000 in funding to Habitat for Humanity.

The nonprofit is asking for $182,910 from the Dedicated Housing Funds to build at least five affordable, energy-efficient single-family houses in NECD, priced for first-time homebuyers and low-income households earning less than 60 percent of the area median income, or about $30,000 annually. The homes could be built on vacant lots; alternately, the nonprofit could buy houses and renovate them.

Habitat has requested another $500,000 in Dedicated Housing Funds, part of which is also earmarked for 10 new or rehabilitated homes in NECD.

Homeownership rates are low in NECD, where two-thirds to 90 percent of residents rent, according to data from the Durham Neighborhood Compass. Of those who do own homes, 40 percent to 60 percent spend more than a third of their monthly income on housing costs —mortgage, utilities, insurance. Meanwhile, median household incomes range from $16,926 a year to $27,500. Durham's median annual household income is $50,000.

Habitat would use the rest of the money for buying up to 11 vacant lots in Southwest-Central Durham. The nonprofit would then build new houses there, also targeted toward first-time homebuyers. These houses would be similar to previous Habitat projects in the West End and Lyon Park.

SWCD also has a high rate of renters and homeownership costs, due in part to the condition of older houses that are expensive to maintain.

It would be nice if affordable housing pieces looked at the average civic cost per unit. By this standard, no organization will be more productive than Habitat for Humanity.

$682,000 / 26 = $26,230 per. Habitat leverages their network of funders and volunteers for the remainder. Compare this to the astronomical costs per unit for projects such as Rolling Hills. Depending on how much you sweep under the rug, I’ve heard numbers between $250,000-450,000 per unit.

Further, not all affordable units are equal. Homeownership is vastly superior to renting, both for the occupant and society as a whole. Affordable rentals, notorious for awful design, have a very sad history, many lasting 30 years before being abandoned to the wrecking ball. Hardly sustainable or beneficial.

Homeownership is the primary vessel for household wealth in America. This is not debatable. Families that own homes become self-sustaining, and create nest eggs for retirement. Families that rent, do not.

Habitat takes families who have never owned a home, and gives them a home. Unlike sub-prime lenders of 10 years ago, they train families on financial responsibility and home maintenance. And they require the homeowner to put their own sweat into constructing their home, so there is an emotional stake. Habitat sees remarkably low default rates.

Durham Habitat does about 20+ homes a year. From what I understand they have about 500 applicants, 100 pre-approved. Council should ask themselves “If Habitat can create homeowners for $25,000, how do we help Habitat do 50 homes a year, or 75?”. If housing advocates are serious about helping the MOST people, and helping people in truly transformative ways, I challenges anyone to come up with a more productive place to put Durham’s dollars than Durham’s Habitat for Humanity.

@Al-
What has Durham HfH's long-term success rate with home ownership? I know that they have built many homes in SWCD, but how many of them are still owned by the original owners? How have the owners fared when it comes time to sell the homes? If the home is a nest egg, as you stated, then do the owners of the homes actually make enough money for retirement or long term care once they want to sell?

At the end of the day, owning a home isn't for everyone and it is not a one-size-fits-all solution for poverty. Home ownership entails significant risk for those involved, and not every low income individual is suited to handle these risks. I do think we should promote home ownership for low income residents of Durham, but I don't think it should come at the expense of providing safe, quality rental units at an affordable price as well.

@ Rob G. You ask some interesting and excellent questions:

1) What has Durham HfH's long-term success rate with home ownership? Most HfH buyers are the first in their family to own a home. So HfH creates homeowners a markets where none exist. IMHO, they do it better than any other organization. Habitat could comment on how many clients are in their home long term. I do know the process is life changing for many, if not most. It’s really none of our business if they sell the home in 2, 5 or 20 years. They have the right move as they please, and they have the right to profit from their investments, just like you and me. These homes are not appreciation restricted, meaning the Habitat owner captures upside that a Land Trust owner does not. Either model can work, but appreciation is a benefit pretty much all the commenters on this blog get, and I object to those who say lower income families shouldn’t capture the same benefit. Good for those homeowners.

2) Do they create a nest egg? If HfH homeowners stay in their home, the answer is Yes. It’s really no different than unsubsidized housing. Pay the mortgage for 15-20 years, at the end of it you have a $150,000 asset (today’s money), with no debt, which you can use as you please. For a huge amount of Americans, this is how they retire. It’s no different for Habitat owners. Thus, a HfH can be (and is) the difference between being able to retire or not. A shocking amount of American’s net worth is in housing. For those over 35 years old, more than half of median net worth is in housing. So homeownership can be life-changing, especially for families in lower income brackets.

3) Owning a home is not for everyone, I agree. Some cannot hold jobs, some cannot pay bills, some cannot defer gratification, some do not have enough in savings to make the risk worthwhile. Some move too often, some fear commitment, some have higher priorities. And on and on.

4) I’d hate to conclude that an investment in Habitat comes at the expense of quality rentals. This shouldn’t be an either|or. When it comes to the focus of affordable housing advocates, to me it appears disproportionally geared to renters, and disproportionality to multifamily. Sadly, I expect we’ll end up subsidizing early-career childless hipsters at the expense of working class families. Call me biased, but given our limited funds I want affordable housing funds targeted to low-income working families with children. Creative people like to reinvent wheels, but if Habitat has proven successful at providing affordable housing, then part of our focus should be on growing models that are already proven to work.

I agree with you 100%. This might be the best deal that city has been presented with in a long time.

BTW, the 26k per unit is not HfH's cost, that's just the funding they are requesting from the city.

Anyone have an estimate on what the 26 units will return to the city and county in property taxes compared to what the properties are paying now?

Is the county chipping in money? They should at least be willing to give the same 70% of property tax over 15 years deal that big developers get.