Before the community forums on Durham Police Chief search, a time for reflection 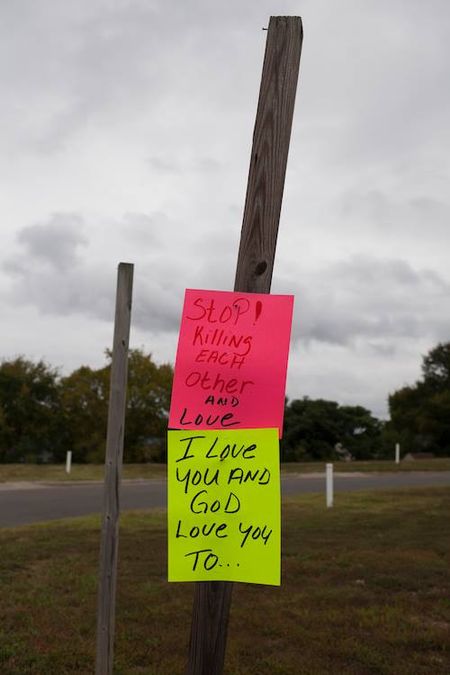 There are 34 of them, plus three people killed in acts determined to be self-defense, and a suicidal man who died in an officer-involved shooting.

This is the situation that the next police chief will have to grapple with. When Police Chief Jose Lopez, whose retirement was forced, leaves his post on Dec. 31, this will still be a city where violent crime is up and trust in the police is down, way down, and in many communities of color, non-existent. It will be tough to find the right person willing and able to mend these relationships not only with minorities, but also within the department and the entire city.

About 25 people, most of them African-American, attended community feedback session last week sponsored by the International Association of Chiefs of Police. The purpose of the session was to gather information in preparation for two more community meetings about the police chief search:

You can also comment online, via Developmental Associates, the Durham company leading the candidate search. (Former County Manager Mike Ruffin is on DA's staff; the head is a Duke University graduate.)

At the feedback session, a member of the FADE Coalition, a citizens’ group instrumental in exposing Durham police abuses and misconduct, noted the “systematic and institutional problems” within DPD. “That’s why we didn’t call for Lopez to be fired,” he said. “Because he will be replaced by another Lopez.”

African-Americans differed on whether the mistrust results from over-policing or under-policing, but there was one consistent theme: They feel the police do not see them as human beings. Residents are a problem to be managed, a situation to be thwarted, an irritant to be eliminated.

“There is a focus on criminal activity rather than education,” said a minister who has lived in Durham 65 years. “’We’ve herded you, and you will live under these conditions regardless of whether we change.’”

The minister then described an incident emblematic of the problem:

“I went into a restaurant and there was a white woman and a white officer. The white woman said, ‘Thanks for keeping streets safe.’ The officer said, ‘Thank you. We do what we can.’

I said the same thing to the officer. The only comment I got was, ‘I betcha.” That’s a subliminal message that you didn’t receive a message. It was offensive. With this kind of involvement we can’t communicate with police unless it’s at gunpoint.”

Clearly, this is not just a Durham problem, but one afflicting many cities. The FBI announced yesterday it would expand its tracking not only of police shootings but of other uses of force that seriously injure someone: stun guns, pepper spray, even fists.  The data also will be collected and shared with the public in “near real-time,” according to the Washington Post.

(NACOLE, the National Association for Civilian Oversight of Law Enforcement, also collects data and publishes a digest of incidents, responses and conversations about police misconduct.)

These conversations are also ongoing within police departments. Police trade magazines and online sites are a good way to gauge what's happening internally:

“We cannot ignore the fact that we have not achieved legitimacy in some of our more challenged neighborhoods. … We can pat ourselves on the back and talk about how far we have come in reducing crime and establishing community policing, but we haven’t come far enough.

“Ferguson isn’t just about the shooting. It is about the tension and the issues that have been in existence for decades and the reality of things that have happened to people over the years, some of which police have been very much responsible for.”

The minister at last week's feedback session that the tension between police and communities of color results from "a lack of communication and understanding about what the relationship should be between the police and a neighborhood."

“It’s a communication breakdown," he said. "When we face the police it’s a serious and stern condition, never friendly."

A police chief and his or her department bears great responsibility in a city, but not all of it. Mass incarceration, arrests for minor offenses, long sentences for nonviolent offenders, the lack of rehabilitation in prison: These policies and laws, enacted by punitive legislatures and Congress, heighten the economic, health and educational inequalities that lead people at acts of hatred, acts of desperation.

Here is the list of people whose deaths have been ruled homicides this year:

There 22 days left in 2015. Durham, let's spend the last three weeks of the year in peace.

Perhaps "trust is down, way down" amongst a very loud, very vocal minority. But it is not down with all of us, or even a majority.

A merry Christmas to all Durhamites, police included.

I tend to agree with The Mgmt. Any frustration I have with the DPD is that they are understaffed and as such are only able to respond to calls. This week I also read of a complaint from a resident in Hope Valley Farms that it took the DPD 20 minutes to respond to a break-in in progress call.

These low staffing levels leaves them unable to perform the proactive, neighborhood policing on foot and bicycle, getting to know the people, that so many call for. Perhaps this low staffing level also has some bearing on the dramatic increase in murders this year. What impact would foot and bicycle patrols in our neighborhoods have had on this number?

Chief Lopez requested 56 officers in the last budget cycle; he got 0. Given this, I find it troubling that the City of Durham lists 'Safe and Secure Community' as item 2 in a 5 item list of over-arching goals for the 2015-2016.

If the City of Durham wants to improve their relationship with THIS citizen, might I suggest that it immediately provide the Durham Police Department with the resources that it needs to hire and retain highly skilled officers and hire the appropriate number of officers that will allow for neighborhood foot and bicycle policing.

Given all of this, I have to wonder; was the wrong employee of the City of Durham fired?

Steve and the Mgmt, I'm so glad you posted these comments. I think Chief Lopez should have been allowed to remain. This would have better prepared Durham to select the next DPD leader. I totally agree about the loud minority. I know one activist who was quoted in the paper when the news broke about the termination. He has always been extreme. He certainly doesn't represent my opinion. A new chief is unlikely to change Durham much. These problems are deep rooted and will take societal changes more than administrative action. I posted this in Nov. :" Who is the last Police Chief that Durham liked? I'm being serious. Sometimes, I think we expect miracles of them."

Do any of you have data to support your claims that only a minority are unhappy with the police? Or are you just going on your (white, privileged) intuition?

Rann, do you have data that a majority are unhappy with the police? I've not seen anything that shows it being one way or the other.

I didn't make any such claim.

Rann, You are making me laugh. White and privileged? Who's speculating now? You are right about one thing. I'm white. I've worked with many "privileged" people of African descent. In fact we were peers. You make it sound like being privileged in Durham is exclusive to being white. By the way, I don't consider myself privileged.
I'd call myself part of the middle class in this town.

Violent crime had been falling for 15 years in Durham, and continued to fall 3 years into Lopez's tenure, but each year it fell at a slower rate. Then it began climbing again. It appears that it will make its biggest year-over-year increase this year in two decades.

The FADE coalition painstakingly documented strong racial bias in policing and rapidly falling trust among non-white parts of Durham (which, let's remember, constitute the majority of the population). Lopez accused FADE of cooking the data, so city council ordered an internal investigation, which in turn showed exactly the same thing.

In the Carlos Riley case, the internal police report showed that the officer shot himself in the leg. Lopez buried that report along with the data that showed that the officer had a history of stopping black residents at a far higher rate than the rest of the department. He demanded the DA prosecute Riley, and after the farce of a case finally fell apart and the defense attorneys released documents detailing just how ridiculous the whole mess was, Lopez criticized the verdict.

Can't imagine why people might think Lopez needed to go or that there's a problem with legitimacy in the department.

I am not an expert in survey design, but I think the one the City put out about the selection of the next Police Chief could use some work. Besides some basic legibility concerns (tiny font and responses all smashed together), the framing of many of the questions is strange.

Take Q1, which asks about the most important public safety issues in Durham. The response choices vary between different actual crime types - vandalism, burglaries/theft - to things that are sometimes (but not always) associated with crime like drugs and gangs to things that the police could do to improve public safety - more personal connections with officers, etc. It's very awkward. And the choices given are pretty strange. If you're going to list crime types, how are violent crimes like murder and rape not on the list? Or other preventable deaths/injuries like traffic crashes?

Q3 asks about current satisfaction with the relationship between police and the community, but doesn't ask for any follow-up information. Wouldn't it be nice to know what specifically people are satisfied or dissatisfied with?

I realize this is just one way the City is engaging the community, but this will likely be the way they get the highest number of individual responses. It would nice if they spent a little more effort on making the survey usable.