This developer is the first in Durham to request an affordable housing density bonus, since it became available in 2003.

a) What is Scientific Properties? No, sorry.

b) What is Austin Lawrence Partners? Only if you consider $500,000 affordable.

The correct answer is: Who is Bob Chapman?

Chapman developed Trinity Heights and parts of the Geer and Foster streets neighborhood. He’s also behind Church & Cleveland Partners, which is advocating for a two-way downtown loop and the infill development that will likely follow.

His latest project is Rose Walk, 5.6 acres in the 700 and 800 blocks of West Club Boulevard; for further orientation, that’s between Duke and Ruffin streets.  Download Z1500020- Rose Walk Club Boulevard

Chapman plans to build 70 units there, which includes the density bonus. City ordinance states that to qualify for the bonus, a developer must designate as affordable 15 percent of the maximum number of units allowed by the zoning. We won’t bore you with the math, but in this case it equals nine affordable units.

Because the land required a rezoning to allow for higher density, 10 units per acre, Chapman presented the proposal to the Durham Planning Commission Tuesday night. 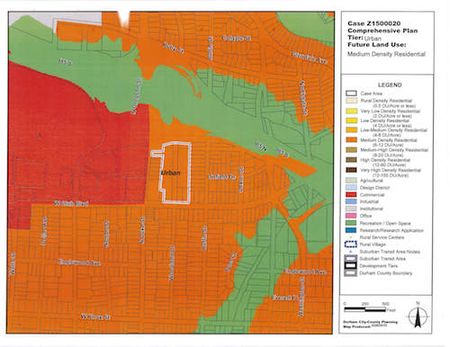 After much back and forth between the commission, Chapman and the planning staff, the proposal passed 11–0. However, that approval came with the stipulations that Chapman and planning staff work through the buffer and green space commitments.

Landscape architect Dan Jewell told the commission that Rose Walk will be designed as a pocket neighborhood, characterized by homes of different styles that face a common green space, and thus, have smaller private yards. Cars park behind the houses, accessing them via a loop, which obviously, will be two-way.

Pocket neighborhoods have been heralded as the Cure for Ugly Developments.

“These pocket neighborhoods are a wonderful alternative to the four-story apartments going up all over the place,” local Realtor Bill Anderson told the commission.

But they’ve also been cursed as the Ruination of Many a Neighborhood. I wrote about pocket neighborhoods in September, noting that a developer could tear down an old house, even an historic one after waiting the required year, and build a couple of expensive homes on the lot with some shared space. While a pocket neighborhood by definition, it would not be one in spirit.

"I have to eat my words. I didn’t think the density bonus would come before us." —Planning Commissioner DeDreana Freeman

Although the acreage is largely vacant and heavily wooded, there are two brick rental houses at 708 and 710 W. Club Boulevard, which will have to be moved or torn down. According to Durham property records, they were built in 1944 and 1945. Since their owner lives elsewhere in Durham, the houses appear to be rentals.

What will replace them? Currently the plan calls for four to eight row houses, 18–36 cottages, 27 single-family homes and eight to 12 flex units, most of which will be affordable rentals. However, as Patrick Young of the city planning staff pointed out, “cottages” and “flex units” are not defined in the development ordinance—and will need to be before City Council holds a final vote on the project.

(Young also seemed miffed that Chapman had sprung several aspects of the proposal, including the affordable housing density bonus, on staff at the last minute.)

A gully and creek run through the middle of the property, raising concerns among neighbors about drainage and flooding. “We could preserve the creek and retain the topography as much as possible,” Chapman countered.

Yet every Rose Walk has its thorn (sorry, it’s late). “I’m extremely excited at the prospect of using the density bonus,” said commissioner Rebecca Winders, also a member of the Coalition on Affordable Housing and Transit. “I think this is going to be a great project. But I think it needs some more work. It’s not quite there yet.”

One shortcoming is buffering. Commissioner Tom Miller asked Chapman to guarantee that a buffer would be erected to shield the development from the I-85 ramp. “You need to shield your residents from that,” Miller said. Chapman agreed to plant a thick stand of evergreen trees and shrubs to drown out the noise of semi trucks braking and motorcycles revving toward the interstate.

Abby Bartel, who has lived on Ruffin for 13 years, told the commission she is concerned about traffic, which is already congested along that stretch, and the effect of extra students on Club Boulevard Elementary.

“I always knew there would something go there,” she said. “But I thought it would be better.”

Alas, it could also be a lot worse. Just look at 605 West and 300 Swift. The Ruination of Many a Neighborhood.

Is there a site plan?

The link in the story (Download Z whatever) has all the materials. Council will need to approve the permanent closure of Sally Street before it's platted. But you can see what they're proposing, including some drawings.

Thanks Lisa. The claim is that it'll be a "pocket neighborhood", but until we see how the units are arranged (which happens after a rezoning), we won't really know. 70 units on 5.6 acres sounds like a few large apartment buildings...

It will end be a few larger structures, similar to what I seen in North Durham townhouse developments. "Pocket neighbourhood "sound like a yet another developer code word for bad design, make a quick buck. 5.6 acres isn't a lot of space for 70 unit and while 10 units(14.3%) are slated for affordability isn't enough. The developer have left themselves plenty of room in the unit numbers to move it that direction.
I'm put off by the screen, the developer will be allowed to place cheap evergreen shrubs to"dampen" noise. I live to next to 147, it isn't enough here and it won't be enough there. Some some sort of larger sound barrier is need.

I really hope this doesn't become the next 605 Chapel Hill, 300 Swift, or Whetstone Apt(501 Willard St). It wouldn't be as bad if those were at least aesthetically pleasing, and higher quality construction. Like this apartment block in Copenhagen. http://www.archdaily.com/15022/mountain-dwellings-big

Let me play devil's advocate on this, Damian. I'd argue that we have competing priorities and the challenge is to balance all of them: accommodating the ongoing population growth in our region, increasing the stock of affordable housing, and maintaining aesthetics.

Noting first that the project is slated to include rental units as well as row houses, SFHs, and cottages -- I really hope this is a chance to get some commercial "tiny houses" on the site -- we're not talking about a monolithic apartment/condo building here. Instead, it sounds to me something more akin to a denser version of the Finsbury section of the Davis Park development out by RTP.

And there's no way to accommodate all three of the desiderata above (new housing, more affordable housing, and attractiveness) without greater density.

It's tough to imagine an area where higher density makes more sense than this. The site is located along an Interstate highway and a busy US Hwy. (Duke St. north of Club), next to a giant commercial shopping center. And, as we'll talk about in more detail later, the new East End Connector offers a perfect upcoming solution to connect these units to RTP and South Durham with less impact on neighborhood streets.

The likely alternatives for this site discussed back-in-the-day probably would have been a hotel or gas station, IIRC -- and my memory is fuzzy in re the old signage on the site.

Instead, there's a proposal to lever less than 6 acres into seventy housing units, including a significant number of affordable units. I don't know the numbers behind the proposal, but I'm going to assume you're going to need a higher aesthetic appearance to draw SFH and row house buyers into a dense site. If we lower the density, do we impact other aspects of such a proposal?

I think we all need to see more details on this, but frankly, I think a dense proposal is exactly right for this site. And, it offers an interesting model for an eventual redevelopment of Northgate, which will probably happen in many of our lifetimes.

My first instinct on this was 'Bob Chapman - please not again'. However, looking through the proposal here, I find myself agreeing with @Bull City Rising here. I'll wait for more detail, but I think this could turn out well.

These ideas aren't always bad: The complex near Green and Ruffin is well-designed, not gated, and quite comfortable (I have a couple of friends living there). I look forward to seeing if this will a better development model than the one that led to all the horrible (and horribly expensive) apartment complexes that have been a major driver of the insane rise in rents in Durham.

On another note: Kevin, is there any way you can enable usernames and tagging on BCR? It would make for a better user experience, imho.

I'm excited to see how this plays out. It think it could be an excellent prototype for new development if it is done well. I personally hope to see tiny homes and pocket neighborhoods become an available zoning type because it could provide the affordable housing our community so desperately needs without unsightly appartment blocks popping up everywhere.

Will, Bob Chapman attended a Northgate Park Neighborhood Meeting a few months ago. He said that a small group of apartments would be near the entrance of the development. Sorry, I don't remember the exact number but definitely below 20.
The emphasis was on homes not apartments. He did say that some home models would come with garage apartments.

I look forward to watching the progress of this proposal. Bob is sensitive about aesthetics and generally has a traditional bent. I cannot fathom his doing anything approaching ugly, bulky apartment design.
There are many, many ways to skin this cat. For one source, have a look at Ross Chapin, an architect with numerous built projects described and photographed. Be charmed by photo of Greenwood Avenue Cottages.
I definitely agree that sound barrier at I-85 is vital - probably beyond vegetation only technique.

The pocket neighborhood at Carver and Duke/ Gregson (I can't recall which one) always comes to mind for me. The fence surrounding it has been hit by cars several times over the years.

The most disappointing part about 605 West etc. is the design for how much rent they are charging.

Chapman has a pretty decent development history and is probably trying to be creative within his ideal development. I am more worried about the numerous knock-offs that would follow and not have respect for design and/ or details.

Technically, a four-story building could be well-designed provide more open/ shared space and affordable housing. It would also be more energy efficient for all of the residents.

It will be interesting to see if Mr. Chapman can pull this off but I would prefer it to be site-specific development plan versus a specified zoning district right now.