After 32 years, Fishmonger's in Brightleaf Square closes because of tax problems 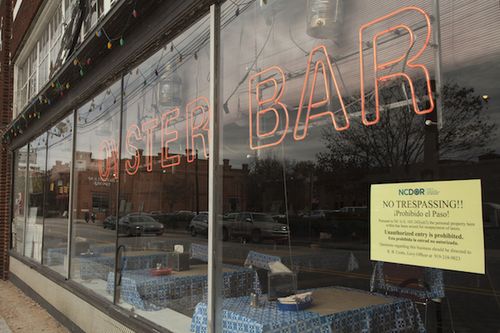 On each empty table, packages of saltines rest in plastic blue baskets atop plastic blue-and-white tablecloths. Napkins billow from their metal holders. Placemats of brown butcher's paper await customers. If there were a today, the specials would include grilled swordfish, cajun catfish tenders and banana pudding, all scribbled in colored marker on a whiteboard.

"It's closed!" a man yells from a passing car. "What an institution."

On the front door and window, lemon-yellow signs posted by the N.C. Department of Revenue warn, "No trespassing!! The personal property here within has been seized for nonpayment of taxes."

Although the details of the most recent financial difficulties are unclear, Gary Bass, the longtime proprietor, has a history of tax problems. Bass could not be reached for comment.

The respite didn't last long. In April 2006, Bass filed for bankruptcy. Creditors included the state ($67,000) and federal ($38,000) tax collectors, his landlord, SEHED; several newspapers and phone directories, even the company that serviced the restaurant dishwashers.

Bass adhered to a court-ordered payment plan for four years, but then fell delinquent on the monthly installments. By the time he finished paying the secured claims in 2011, Bass had shelled out $114,000, with an additional $11,000 and change in unpaid, unsecured claims.

While the restaurant had its diehards who were unfazed by its gritty atmosphere, many of the Yelp reviews had been dismal over the past year: the smell (it was fishy), the service (inconsistent) and the cleanliness, seconded by county health inspectors who, on Oct. 15, gave it a abysmal 77 score.

The Durham-based SEHED Investment Group, managed by Terry Sanford Jr., owns the building—a former Dodge dealership—and much of the 800 block of West Main. The company also owns the space next door, the erstwhile Triangle Pint and Plate. It also closed, although that appeared to be for lack of business, not any dustup with the revenuers.

That leaves prime real estate adjacent to Torero's, the last restaurant standing on the block, near Duke Street.

Agree. I will shed no tears for this place. Knowing the owner didn't pay his taxes makes me even less nostalgic for a dirty fish restaurant.

Here's hoping the developer makes a call to Chef Ricky over at Saltbox...

The guy was in business for 30 years. He was doing something right. People should be less critical. It sounds like he simply ran out of money. Its a difficult thing to run a business using your own money instead of crowd funding dollars. I remember a time when Durham was very excited about this establishment, myself included. Just to prevent any comments about crowd funding-- I do think its a great tool to determine in advance, if there is a demand for your business.

This was a great restaurant. So sick of all the carpetbagging s.o.bs posting negative comments here.