I Walk the Line: Ninth Street, a beer, a book and a train 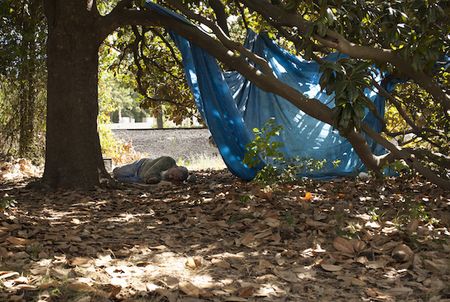 Near the train tracks along Ninth Street   Photo by Lisa Sorg

Candace Mixon, her dog, Jelly, and Matthew Lynch were spending a perfect fall afternoon sipping beers at a picnic table outside Sam’s Quik Shop. (To clarify, Jelly was not drinking.) They looked young and metropolitan, like people who might know  which end of the regional day pass to stick in the card slot.

It turned out they were ardent public transit fans, and using our own code, we traded observations on buses and trains in the way that regulars and commuters do.

And so on. It’s not that they or I oppose cars—we each own one—but driving has become a drag.

Read more about plans for an elevated train and the Ninth Street station.

Am I the only one who wishes these were longer? More historical context, not just about old buildings but also past stories, or present day info would be welcomed. Good concept, Lisa. You're an excellent journalist; I as a reader just want more of a story vs a short blurb.

One more thing: did that gentleman sleeping give his permission to be photographed? I do think it is a little problematic if the answer is no. I find the nagging issue of homelessness itself much more problematic though.

BullCityKitty: Are you clicking on the link "Read more about plans..." ? A longer version is there for all these posts. Because of the design constraints of this interface, I put the longer story with census figures, more photos, station plans, etc. on my blog. I'm glad you want more words, though!
As for the man, no he did not give his permission. Legally, anyone can be photographed in public; there is no presumption of privacy.
That said, I did not tread into the space that I considered "his home." And I generally try not to photograph homeless people because I think it's overdone. I took this photo because he looked very sweet and peaceful, and the big blue tarp added a color field.

I didn't realize the link was to more of your writing. I figured it was to the plan or something. Going to look at it now.

As for the picture I know that the man didn't need to give you his permission. Legally you are in the clear and I know your heart is in the right place on these issues. It still seems a bit exploitative to me.

I understand why you feel that way. I'm a bit uncomfortable with it myself. I'm always weighing trying to bring situations to the public eye with the hesitation that it is, or could be perceived as, exploitative. It's a common discussion in photography circles about where to draw the line.

Interesting that folks are assuming he's homeless just because he's taking a nap outside.

Jonathan it's interesting, to put it mildly, that you seem to think a gentleman in what looks like a dirty shirt sleeping in a pile of leaves under a tarp by the railroad tracks would be doing so by choice. How privileged does one have to be to get that perspective on life and the publicly displayed plight of another? Tell me more.

Lisa, I appreciate that you are the type of person who gives a reflective answer as opposed to a defensive one. Thanks for always being willing to discuss these things with me and the rest of your readers. I finished the rest of your piece on the blog and it was good stuff.

BCK - instead of projecting my thoughts or feelings about people based on appearances - talk about privilege! - I don't assume anything. I happen to know the man sleeping and consider him a friend. That can happen when you take the time to get to know people around you instead of making assumptions about them. His business is his and not mine to share. But you are the one who is projecting your privilege to think that someone would not choose to hang out there.