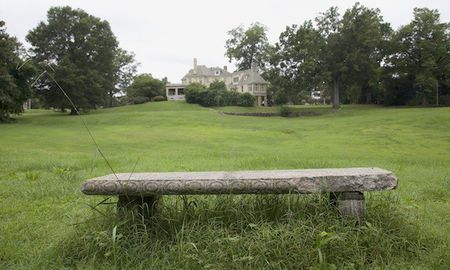 Looking from the meadow toward Greystone Inn  Photo by Lisa Sorg

About a year ago, Randall Brame, co-owner of the Greystone Inn and the adjacent vacant meadow on Morehead Avenue, left a Historic Preservation Commission meeting dissatisfied and prepared to sue. The city’s Historic Preservation Commission had rejected a proposal by Lomax Properties of Greensboro to build an apartment complex on the three-acre parcel.

The commission told Lomax the project as planned was too massive, too onerous, too ugly, and chafed against the other residences in the Morehead Hill Historic District.

On Tuesday, Brame sat in the back row of the second-floor City Hall Committee Room and listened as Joe Fitzsimon, HPC chair, asked, “Do we have a motion?”

Brame sighed. Not one of relief, but of anticipation.

Then the commission voted 7–2 to approve the project. On its second architect and third, fourth, maybe fifth iteration, the deal was done: 124 apartments, none of them affordable. In fact, at a neighborhood meeting earlier this summer, the developers said the rents would be "as much as the market would bear."

Affordability is well beyond HPC's scope. Previous commission discussions focused on mass and scale of the four buildings, which have been reduced, and the trees. Twenty-nine mature trees, in varying stages of their life cycles, stand on the property; about nine of them will be saved, with another 51 canopy trees planted.

Two commissioners, Micah Kordsmeier and Jennifer Martin, voted against the project largely on these grounds. “My concern is still of mass and scale,” Kordsmeier said. “It’s still out of context even if no one [apartment] building is larger than Greystone.”

It may not have been the ideal development for this bucolic piece of property—an anomaly, considering it is jammed against the Durham Freeway and a low-slung medical building. But as much of the neighborhood and Tom Miller, local historian and planning commission member, warned, it could be much worse: Cell tower, bank, veterinary clinic, commercial parking lot, school, government building, hospital, bus and rail station and hotel are all allowed on this lot, which is zoned Office-Institutional.

“It may not be used for single-family or duplex homes,” Miller told the commission. “When we judge this project today, and its impact on the historic district, we have to consider the uses available and which is the least intrusive. All other uses would have a greater impact on the neighborhood. Non-residential uses encourages more non-residential in the future. You destabilize the neighborhood. I don’t think something better is going to come along.”

I’ve followed the Greystone saga from its inception. You can read the back story here:

Apartments slated for meadow next to Greystone Inn

I thought the Historic Preservation Commission is supposed to be focused preserving the integrity of the Greystone Building. Wouldn't the Planning Commission determine the appropriateness of design with input from the HPC?? Will they go through another round of design changes at the next stop in the approval process? Why don't we have a design standard for people to meet or exceed?

20 less units equals that much more stretch in the "market" price for these units.

I am more concerned with developments have more architectural details and less flat/ dull surfaces than sizing especially across the street from the Senior Tower (I know it's not in the historic district). I hope this development works out for all involved while preserving the Greystone.