1. DHA, definitely, 100 percent, no doubt about it, is applying for the same competitive tax credit that Self-Help and/or other private developers are, which could determine the fate of the Jackson Street affordable housing site.

2. Few members of the public attend these board meetings, which means people know little about this agency that affects the lives of thousands of Durhamites.

Regarding No. 1, Steve Schewel, City Council liaison to the board, asked about DHA's plans to apply for a 9 percent tax credit. Awarded through the N.C. Housing Finance Agency, it would be applied to the demolition and rebuilding of a public housing community on East Club Boulevard.

Even though DHA has not scored the site—100 is a perfect grade, and a must, given the competitive nature of the credit—"we know this is our window to submit [an application]," said Meredith Daye, DHA director of development.

Self-Help, which plans to apply for the same credit for the Jackson Street site, says its application scores 100. But here's the rub: The credit requires "site control," in other words, ownership of, or other legal mechanism for the land.

DHA owns the land on Club Boulevard. Self-Help does not own the Jackson Street site; the city does. And it looks unlikely that the city will donate the parcel to Self-Help. Rather, the city is considering selling the land through an RFP process. (The issue is scheduled to be on the agenda for City Council work session on Sept. 10.)

There are 77 single-family, detached homes are on the East Club Boulevard site. Built in 1967, they're getting long in the tooth. 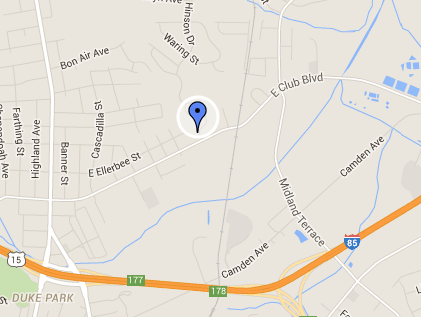 The 77 new units would be townhomes geared toward households with Section 8 vouchers, which should help reduce the number of people on the waiting list. Earlier this year that number totaled more than 2,000.

The townhomes could even be dispersed throughout Durham, what are called "scattered sites" on publicly owned land. One school of thought says that scattering the affordable housing avoids concentrating low-income people in one place—the projects. However, it is also important to consider how residents' well-being could be affected by the upheaval of their neighborhood. Short-term residents may be happy to move to another part of the city; those who have lived in those homes for years, though, may have connections and supports among their neighbors.

It is probably a good idea just to ask them.