I'll be the first to admit my preternatural wariness about the work of Civitas, the conservative think tank that's part of a sprawling consortium of organizations funded largely by Art Pope and responsible for the reddening of state government and in part for increased appearances by the likes of "Americans for Prosperity" here in our state.

But we have damn too little investigative reporting happening around here, so credit goes where credit's due to Civitas' Andrew Henson for his story Tuesday about the termination of Durham County Social Services chief Gerri Robinson.

As we noted here in our bon voyage to Robinson a couple of weeks back, the DSS chair came to the Bull City's host county after a rocky tenure in Nashville, Tennessee, and hit headwinds early in her term over a controversial child care subsidy idea -- one which was said to have hastened the departure of at least one local non-profit leader involved in early childhood support.

But as commenters here noted at the time, there was a little grey-cloud asterisk hanging over the firing -- namely, the timing. The personnel change came simultaneously with the selection of one County Commissioner Joe Bowser as vice-chair of the DSS board, and with newly-appointed DSS board member Gail Perry getting called up to lead the agency at her very first meeting.

The Durham City Council decided early this afternoon to defer a possible utility extension to the controversial proposed 751 South development.

The council voted to wait until current lawsuits about the Southern Durham project come to a close, which staff estimated could take anywhere from 18 months to three years. The council was motivated at least in part by fear of becoming entangled in litigation itself.

“It’s clear to me that moving ahead now before the litigation is resolved does raise expectations and anxiety,” council member Mike Woodard said at a special meeting on the subject that was held today.

“I think there’s just way too many questions about this with confusing and uncertain answers about constitutional issues,” he added. “That’s always a red flag for me.”

“I just don’t understand why we would move forward,” council member Diane Catotti said. “I don’t see the advantage to the city.”

The decision against extending utilities makes it unclear when Southern Durham Development might be able to start building 751 South, a high-density project that could include 200 residential units, 125,000 square feet of shops and 25,000 square feet of offices by the three-year mark. The project can’t be built to that scale without water and sewer service, and the city of Durham is the entity most likely to provide it.

A group of Durham residents have sued the county over its controversial decision to rezone the 751 South property. The new zoning permits dense development.

Opponents of the project say that the property is so close to Jordan Lake that its high-density facilities will harm water quality thanks to unfiltered stormwater runoff.

Southern Durham Development and its allies, however, assert that the project can be built in such a way that the lake is protected. They also tout the development as being a potential source of 3,000 new jobs. 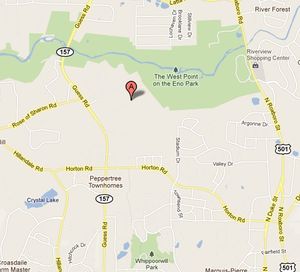 One little-heard provision in this General Assembly's session work: the closure of a number of minimum-security correctional facilities throughout the state as part of a cost-cutting move that could shave almost $11 million from the state's spending line this year.

Among the four facilities impacted, per the N&O: the Durham Correctional Center, a facility that houses more than 200 inmates and which sits just to the northeast of the Horton Rd./Guess Rd. intersection in North Durham, right near a few shopping plazas and backing up to the popular West Point on the Eno city park.

With its October closure, it turns out a small piece of Durham County history will come to an end:

In 1925, Durham County built a prison for $95,000 to house 150 inmates. Constructed of brick and surrounded by a heavy wire stockade, the three-story structure was noted as being the best planned prison of its kind in the state. On the first floor was dormitory space for inmates, as well as a dining hall. The second and third floors provided space for offices and staff. The building was heated by steam and showers were in the basement.

Durham was one of 51 county prisons for which the state assumed responsibility with the passage of the Conner bill in 1931. It was one of 61 field unit prisons renovated or built during the late 1930's to house inmates who worked building roads.

No word on what the future of the site is, i.e., whether the state will hold on to this little chunk of land or sell it off for development. In the latter case, even with the current downturn in residential and commercial development, one wouldn't doubt that there might be people lining up to buy it.

Rare, after all, is the prison facility that's zoned for some of the better schools in any community's school district.

BCR's question: if someone did redevelop the site, would they keep the name Prison Camp Road? We're just saying.

Durham, get your geek on -- Forbes calls us one of the five nerdiest American cities 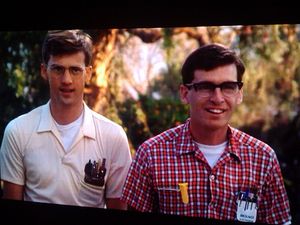 Once upon a time, being called nerdy or geeky? Most definitely not cool.

Back in the 80s, all the cool kids were looking to work on Wall Street or in D.C., where the corridors of power did not admit the pocket-protector set.

But with the Internet, mobile technology and the rise of tablets, apps and all manner of things technological, the nerdly are back. The revenge, one might say, of the nerds.

And a recent Forbes blog post highlights Durham as being among the most geeky of all geeky cities, noting a National Science Foundation's ranking of our MSA as fifth-highest in the US for the percentage of workers in science and engineering-oriented occupations.

Continue reading "Durham, get your geek on -- Forbes calls us one of the five nerdiest American cities" »