"Bargain Furniture" building to get a Pit below, Underground above? 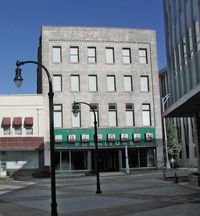 In one of the opening scenes of the dreadful, horrendous, abysmal, and also badly-acted film "Main Street" -- there's a reason, friends, you haven't seen this straight-to-DVD movie in theaters anywhere -- Amber Tamblyn's character drives her late-80s beater car up in front of the Bargain Furniture building downtown, checking her voicemail.

(If I were Tamblyn, I'd be waiting to hear a message from my agent, apologizing for booking me in a piece-of-crap film.)

The shuttered furniture store makes a perfect backdrop for Main Street's message of Southern discomfort, of old money gone broke and new money gone toxic; it's a symbol of desertion and loss and emptiness.

But no longer, it seems. There's activity downstairs and possibly up for the building, long controlled by Raleigh entrepreneur Greg Hatem and Durham architect and developer John Warasila.

In an ironic turnabout, the American Underground -- the incubator space that's nicely humanized a pit of a basement in the Strickland and Crowe buildings at Am'bacco -- may be expanding to the upper floors of 309 E. Chapel Hill St., while an a Durham location of the Raleigh barbecue restaurant called The Pit may be opening up on the ground floor.

BCR heard a couple of months back that Capitol Broadcasting's Michael Goodmon was looking for more room for the Underground, which has been a very popular addition to the American Tobacco Campus.

Even with the recent announcement that the LaunchBox Digital incubator's founders were moving in different directions (though one of the principals behind it may resuscitate his original Triangle-focused incubator idea there), the inexpensive workspaces with shared conference and kitchen facilities has proven much more popular than anyone guessed.

Out of room, Goodmon has reportedly been looking at other spaces around downtown to expand.

We at BCR had mused some weeks ago that the plans Capitol filed to build additional office space near the campus' East Deck and the DPAC could, given the narrow depth between existing structured parking and roads, be ideal for incubator space.

On the other hand, Bargain Furniture is already here and built in the ground, though it could use a little, er, freshening up, to say the least.

The Triangle Business Journal's Monica Chen this week singled out 309 E. Chapel Hill St. as a possible future home of American Underground expansion, though CBC isn't ready to make any statement on the matter.

But the building already seems ready at least for some first-floor upfit.

A tweet from Durham's Ross Grady noted the presence of a sign for "The Pit" barbecue in the building's windows, complete with a web site.

Hatem announced earlier this year -- amidst a split with food partner and 'cue-master Ed Mitchell -- that he was planning to open a second location of the popular downtown Raleigh barbecue business in the Bull City.

(BCR's heard rumors that Mitchell himself has been looking at Durham locations for a restaurant, but no idea if those reports are on target or wide of the mark. And worth noting that while many love The Pit, from great Yelp reviews to a certain amount of Food Network fame and attention, the business has its detractors too -- from the Yelper calling it the Starbucks of BBQ to Grady's chosen description, "an 8000-sq-ft overpriced faux-BBQ theme-park of a restaurant.")

Speculation at the time naturally focused on buildings that Hatem owned in partnership with Warasila.

The business partners, who acquired a number of properties along the Chapel Hill St. axis some years back, have been renovating several already.

The building at the corner of Chapel Hill St. and the Orange St. pedestrian mall, long abandoned, has become a showroom for a local office furniture store, though the showroom space is open by appointment only.

The building next to it has seen façade work and restoration, with a banner above noting the availability of three loft spaces on the structure's top floor.

And now comes Bargain Furniture, whose only recent signs of life had heretofore been the Georges Rousse art project at the beginning of downtown's mid-2000s renovation.

With The Pit destined for Bargain Furniture -- and with renovation of the structure necessary to make such a new use a reality -- it certainly would make sense to have the upper floors occupied by a strong tenant like Capitol.

And for anyone who thought the Underground concept could only expand beyond Capitol's O&O'ed borders when pigs flew... well, maybe there's something to that after all.

But is the ground floor of BF 8000 square feet? This H-S article is the source of that square footage & also says 200 seats: http://www.heraldsun.com/view/full_story/13445938/article-Famed--The-Pit--BBQ-to-open-Bull-City-eatery--sans-Mitchell

FWIW, I've enjoyed the Pit's BBQ at the DBAP, and was grateful to see that they retained the tradition of the foot-long Carolina 'Cue Dog.

But the Pit in Raleigh really does rub me the wrong way, in terms of atmosphere, attitude, and actual quality of the food.

I'd be much more excited to find out that the former proprietors of Chapel Hill's The Barbecue Joint were going to open a new site in Downtown Durham. *that* would be a dream come true . . .

@Ross -- there have been persistent rumors for years that the Joint was looking in downtown. They were linked to the Cafe Zen space, before Tylers was linked to it, before Jim Anile took it on. But I suspect more smoke than fire.

I for one would love to see The Pit open up in downtown Durham. Regardless of your opinion on whether or not their BBQ or atmosphere is authentic, they do a brisk business in Raleigh and would bring people and foot traffic to Durham.

It would be great if they renovated the Bargain Furniture building and even better if the Underground were to move in as well.

Development in downtown Durham is a good thing, regardless of your opinion of the BBQ.

I've definitely seen a lot of construction/engineer-type people measuring, looking, gesticulating, etc.. around the bottom floor of that building in the last couple of weeks.

I love when Grady gets cited as a reliable source. ;

I heard from a very reliable source that The Pitt will not be in Bargain Furniture.

I really would hate for a place with questionable BBQ to be located Downtown.

We're in the South and we pride ourselves on Southern food. I know it seems silly, but I just can't help but think of the tourist visiting Durham and tasting sub-par BBQ.

I'll get off my soapbox now.

@Carol: has your "reliable" source seen the sign in the window saying "The Pit, Coming Soon"?

@Will: Yes - definitely. It says Coming Soon to Durham.

I don't think the Pit's cue is "sub-par" but even if it were, they'd hardly be the first place in Durham or downtown serving "questionable" food.

@Carol - have you seen this sign anywhere else but in the window of the Bargain Furniture building?

@Will: No, but just because it is in the window doesn't mean it is going in that building. Maybe they just don't want to announce the location yet. Maybe they want us guessing on purpose (conjecture on my part). I don't know anymore than what I was told--it will not be in BF.

I imagined that site with 4,600 sq ft per floor would make a great condo buildout on the top 3 floors - close to the growing foodie scene, theatre and farmers market, only blocks from ATC.

You mention the space on Chapel Hill & Orange St - I believe the top floor was just leased to a tech startup (A Small Orange) a month or so ago. I think they are even hiring. Great news.

I just went downtown today and confirm to you that there are two signs in the window "The Pit Coming to Durham". There also appeared to be some remodeling going on. I love the Pit in Raleigh, and their sides are my favorite. When we have visitors to my workplace, they are often advised to try it out, so I think it would be fantastic to tell them it's only 5-10 miles away instead of 25.

Also, I have confirmed with the owner of the building that formerly housed the Book Exchange is under contract for a new restaurant, and also some remodeling underway. I'd be curious as to when the building next door owned by Kimbrell's will be sold and transformed into living space, etc. Anyone have any news? It'a a shame they've been sitting vacant for so long.

Glad something is happening with the building, but I'm sorry it's another bbq joint. With Q Shack so close by, downtown doesn't need more bbq. How about some Moroccan downtown? Or molecular gastronomy, or something else that we don't already have?

I wouldn't say that Q-Shack is "close by" at all - it's about 3 miles from downtown. Even if it were closer, consider the situation in Raleigh: The Pit and Clyde Cooper's are a few blocks apart on the same street, and they both do good business.

Even so, I would also like more ethnic options downtown; Moroccan would a great addition to the dining scence here. I'll pass on the molecular gastronomy, though. I'm pretty adventurous when it comes to food, but no one has convinced me that that stuff is actually food.

@Mark-
The Book Exchange building (the one of three with renovation) will be "Mateo", a new tapas bar from the exec chef at Vin Rouge.

I agree that we need some more ethnic food downtown. There's plenty of room for more Chinese, Thai, Indian, and other options donwtown.

Tell us how you feel about Main Street. Seriously, don't hold back. :>

The PIT has damn good ribs. They fall off the bone and make my stomach feel good. I've confirmed they are the shiz with my brother-in-law who slow cooks his own pig butts down in Rockingham. Those boys down there know their 'cue.

Questionable? I think not.

Unconfirmed, but believable, speculation that The Pit will likely be opening in the former 7Up bottling/Winter Mountain building on the SE corner of West Geer and Rigsbee, across from Motorco and next to FullSteam.