Author’s note: Today, Bull City Rising takes a two-part look at a proposed deal to convert the former Y.E. Smith School building to a home for Maureen Joy Charter School. Part 1, posted previously, examines the building’s history and the basics of the deal. Part 2, below, looks at some neighbors’ feelings about the proposal, at Maureen Joy Charter School and at changes in the neighborhood.

There has been at least some community unease about the request to rezone the historic Y.E. Smith School property, perhaps in large part because things have come together quickly.

“We as a community are pretty cool with the school being in a building that was formerly a school, so that’s obviously a very compatible use,” Aidil Ortiz Collins, facilitator of the community group Uplift East Durham, said last week. “For us, though, we’re pretty wary of, at this point, the process for that, because the zoning that’s up there isn’t for a school.”

“What we’re doing is simply trying to change the zoning back to what it was before and what the entire surrounding neighborhood is,” Levine said.

If the reclassification is granted, a minor special-use permit will be required to allow Maureen Joy Charter School to use the facility. 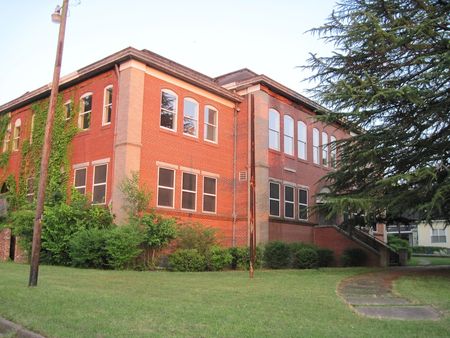 Tiffany Elder is the general manager of Coral Construction and Design, which renovates homes in East Durham. Like Collins, she was initially skeptical about Self-Help’s intentions, but she was reassured this weekend at a community meeting hosted by the organization and the charter school.

“The explanation by Self-Help is that the full existing parcel will be used for a school,” Elder said Monday. “Nothing will be parceled off after it’s rezoned to RU-5(2) to use for any other purpose. They're only doing this so that they can get the property into the use that they need it for. But definitely up front, there was some concern, probably because there was a lack of information given to the neighborhood.”

Rezoning is one of two major obstacles to allowing Maureen Joy to transfer homes. The other, said Self-Help project manager Dan Levine and Maureen Joy principal Alex Quigley, is the sale of the charter’s current campus, a former synagogue at 1955 W. Cornwallis Rd. near U.S. 15-501.

Maureen Joy currently has about 325 students in kindergarten through eighth grade, of which roughly a third live in East Durham. Of 166 third- through eighth-graders at the school who took mandatory state tests in 2010, 139 were black, 141 were economically disadvantaged, 26 were considered disabled and 22 were Hispanic. (Many students, of course, belong to multiple categories.)

Among all students tested, 64.2 percent were deemed proficient in reading and 82.1 percent were so deemed in math. The school made adequate yearly progress under the federal No Child Left Behind regimen, meeting all 13 of its targets in 2009-10.

The Maureen Joy school community has been informed about the pending move and held a parent meeting about it in mid-May. Quigley said questions were raised about the safety of the neighborhood. They were defused in part by comments from Aliyah Abdur-Rahman, a board member for the school who lives near the Smith school. 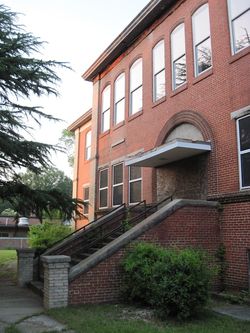 Occupying the Smith school in 2013, as planned, will give the charter several opportunities. Quigley said it will let Maureen Joy nearly double its student capacity, increase academic synergy by having more teachers working at each grade level, move closer to many of its students and get involved in the neighborhood.

In the neighborhood, there is enthusiasm for the old school housing a new school.

“It was obviously a landmark and anchor before, so it would be great to see it be that way again,” Collins said. “Driver Street is getting more critical mass in terms of ... people moving in and people doing new renovations, so I think that would be a really great piece in terms of keeping the momentum going — just creating friendly traffic along that corridor.”

The area has been targeted for improvement by the police, the East Durham Children’s Initiative and both Preservation North Carolina and Preservation Durham. The latter two groups have combined on Project RED, which stands for Revitalize East Durham.

Last month, the nonprofit KaBOOM! organized the installation of a new playground in the neighborhood. A city-funded streetscape improvement project for the commercial area at South Driver Street and Angier Avenue, two blocks south of the Smith school, will start soon as well.

This year, the Smith school and other vacant buildings in East Durham were the setting for a public art project called “New Neighbors” by Efland artist Dave Alsobrooks. (Paintings from the project will be auctioned off this Friday at the Golden Belt Arts studios.)

There is an old saying that it takes a village to raise a child. A similar concept seems to apply in this case to East Durham, and it hasn’t escaped the notice of some.

“Given that it’s such a large area” in East Durham, “it’s going to take a lot of effort to make changes,” Elder said. “So it’s nice to see that that effort is coming from a few different places.”

Any idea what might happen to its current Cornwallis Road site?

John, the JCC may need it for parking....

Does RU-M (Urban Multi-family) require stormwater facilities? Its difficult finding a definitive answer. If so...I'm not sure how much sense a stormwater retention pond makes in an environment on a relative small and dense lot.

Our firm, Real Estate Associates, has the current Maureen Joy facility on Cornwallis Rd. listed for sale. Details can be found here: http://looplink.loopnet.com/17170175/realestateassoc

@ Khalid,
I could be mistaken, but I believe stormwater treatment is triggered by any change of use and/or passing a threshold of site disturbance (which this site will undoubtedly surpass, given Durham's own parking development requirements. And this is regardless of the particular zoning (ironic?. Maybe someone more up on deep album cuts in the gate-fold UDO can comment further.

Really? They interviewed someone who flips houses for a living to speak on whether neighborhood residents like the idea of their neighborhood being 'revitalized'. Such a surprise that she thought it was great.

@gogreen- I'm a resident of East Durham- less than one block from old YE Smith. Having bought and renovated my own house, I can say that 1- some houses in East Durham are badly in need of renovation, in fact, are in unlivable condition. 2- renovating a house is a seriously difficult process, not one that I think everyone or even many people want to take on. Therefore, I welcome the presence of people in my neighborhood who are going to risk their own capital and energy bringing some of the housing stock up to a condition that's livable (and particularly people like Tiffany who are doing it with a light hand that doesn't destroy the historic houses that they're working on).

And come on- East Durham does need some revitalization. There's a lot of great stuff there already. But, there's no dearth of opportunity for improvement. I think 6 out of maybe 15 of the storefronts in the old downtown have operating, functioning businesses. This neighborhood resident would sure like to see some of those empty/shuttered/barred storefronts "revitalized".

I'm also really happy that this specific building will be brought back into the world of usefulness. I look forward to there being people there, and energy, instead of a hulking mostly boarded up brick building.

If you're interested in learning more about the project and following project progress, please visit its community website at: http://historicyesmithproject.wordpress.com/

John, the JCC may need it for parking....