Author’s note: Today, Bull City Rising takes a two-part look at a proposed deal to convert the former Y.E. Smith School building to a home for Maureen Joy Charter School. Part 1, below, examines the building’s history and the basics of the deal. Part 2, to be posted later today, looks at some neighbors’ feelings about the proposal, at Maureen Joy Charter School and at changes in the neighborhood.

It was years ago that the historic Y.E. Smith School stopped being a school and began falling into decay. Now, the building is on the cusp of returning to its original function.

Would-be purchaser Self-Help has applied to rezone the former school property at 107 S. Driver St. to allow it to be used for education. The matter will be heard by the Planning Commission this afternoon.

If the request is granted, that would smooth the way for Self-Help to buy the building from Trosa and lease it to Maureen Joy Charter School. By the time renovations are completed in 2013, under the supervision of local preservation-minded architect Eddie Belk, Maureen Joy could occupy a space that would allow it to expand its student body. 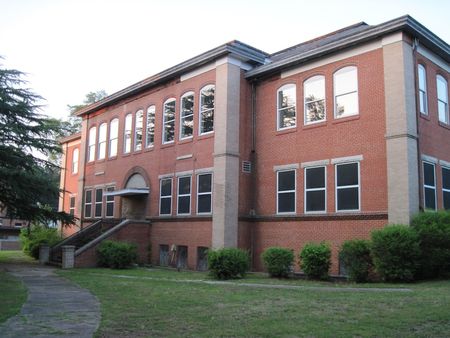 “We’ve been considering a move for a while as the enrollment has grown and the waiting lists have grown,” said Alex Quigley, the charter school’s principal. “So we’ve been interested in expanding to a facility that meets the needs of our students.”

“They serve a lot of kids in East Durham already who right now are having to ride across town to go to school,” Self-Help’s Dan Levine, a project manager, said of the charter school. “And Maureen Joy has a good track record of serving kids who for whatever reason have struggled in the school where they came from. So we feel like it’s a good opportunity to provide better education for kids.”

The move will also put life back into a key building in a community that residents and preservationists have been working for years to strengthen.

Cathleen Turner, the head of Preservation North Carolina’s Piedmont office, helped broker the sale of the Smith school. “It certainly is a prominent property within the context of this neighborhood, the preservation of which I think is going to be a game-changer for our project, which is to see more of the vacant houses preserved and lived in by owner-occupants,” she said.

Turner described the school as an example of early 20th century neoclassical revival style. It was designed by Fred Githens of New York architectural firm Tilton and Githens and opened in 1910. About 15 years later, two wings were added, extending east from the back of the original structure.

A gym/auditorium filled part of the gap between the wings, forming a courtyard that subsequently was converted into interior space.

The building initially served students at virtually all grade levels, according to Endangered Durham. When the city annexed East Durham in 1925, what had been the East Durham Graded School was renamed the Y.E. Smith School, honoring a former school board head.

By the end of the 1930s, Smith served only elementary students. In 1967, following the construction of a new Y.E. Smith Elementary School, the original building began serving handicapped children. By 1980, the Durham Exchange Club was using the building as a workshop. 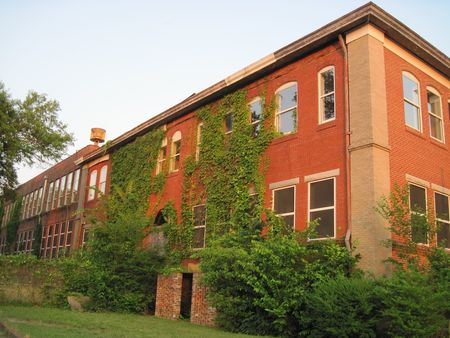 The old school was sold in 1998 to Trosa for about $100,000, county records indicate. In 2003, at Trosa’s request, the property was rezoned to limit its use to elderly housing.

That project never materialized, and the building has been vacant for years. Signs of neglect are abundant in photos of the boarded-up building’s interior.

The renovation will be supervised by architect Eddie Belk, who has also worked on Brightleaf Square, American Tobacco, West Village and Golden Belt and is a member of the city and county’s Historic Preservation Commission. (His involvement with the McPherson Hospital project helped a hotel developer find common ground with Trinity Park residents.)

One of Belk’s goals in this project, suggested Turner, will likely be to restore the school’s octagonal lobby. 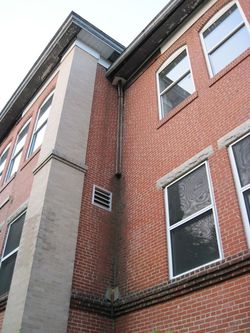 The property covers 2.5 acres, with the school boasting about 45,400 square feet, county tax records show. The property has an appraised value of more than $2 million.

Little specific information about the pending sale and lease is available, but Preservation North Carolina advertised the Smith school as being for sale for $3225,000.

Levine said that the purchase and renovation will cost Self-Help about $10 million, with most of that being spent on refurbishing the school. The building is described as being structurally sound but otherwise in need of a complete overhaul.

Tax credits will help finance the project. Since they require that the refurbished building generate income, Maureen Joy will be expected to sign a long-term lease.

The planned expansion, to about 600 students, will take place over a number of years. The charter will not add grade levels, instead remaining a K-8 school.

The possibility of moving to the Smith building came up last fall, according to the principal. Talks began in earnest this spring.

“Self-Help has just been awesome as we’ve gone deep into the financials and done some real serious work together to create a growth plan” for student body expansion, Quigley said.

I'm glad we got in to Maureen Joy for our upcoming kindergartner & look forward to the school moving closer to home! What a great opportunity.

Is there going to be a public meeting? Certainly we don't need another charter school with its free-range children and evil developers and creative class. Can you not understand that the Durham Coalition for Urban Beaver wishes to make and re-make our lives on our own terms.