Author’s note: Today, we take a two-part look at green construction. Part 1, below, looks at an environmentally friendly home that’s being built in Western Durham. Part 2, to be posted later today, relays what some independent green building experts have to say about trends in the field.

In a little more than two months, Durham may have its first LEED-certified single-family home.

A new company called NC Green Build is constructing the home at 208 Regiment Way. Physically, the site is part of the Colony at American Village on the western edge of Durham County and a short drive from Duke, Chapel Hill and Hillsborough.

The home’s energy-efficient features will save home owners money, Frasher and Lundy say. They are also liable to be more durable than traditionally built homes thanks to LEED, a strict certification program that the U.S. Green Building Council oversees in this country.

“Green building is good building,” Frasher said. “The priorities they’re asking [for] is really what should be going on.” 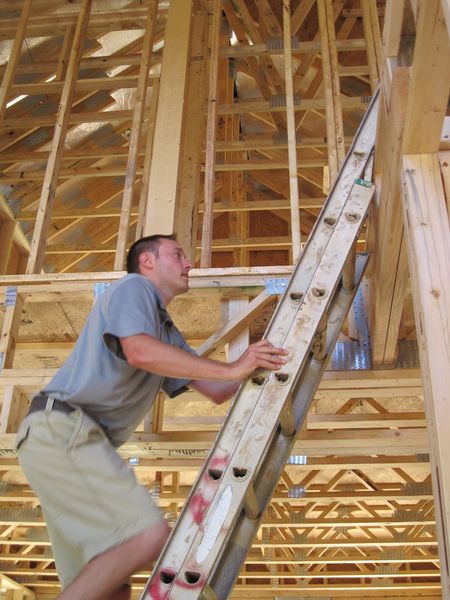 The new company is working to keep the price of 208 Regiment close to those of comparable nearby homes. John Whaley of Maverick Partners Realty Services is the broker for the house, which just went on the market. Encompassing 2,615 square feet and featuring five bedrooms and two and a half bathrooms, the residence is listed at $320,000.

“I think people have been a little surprised at all they’re getting for the price,” Whaley said.

On a recent tour of the home, Frasher, Lundy and Whaley pointed out a number of features. Most of the exterior of the structure, which was most of the way through framing, was covered with waterproof green panels. Joints between the panels were sealed with tape to help make the home airtight.

Before insulation is installed, the small spaces between the studs and the outer walls will be sprayed with flash foam to keep the sale as tight as possible.

The frame itself was built off site but assembled in Durham. It uses an advanced framing design. That means that studs — vertical wooden supports placed between the outer and inner walls — are fewer in number and more widely spaced than in conventional homes.

Those wider spaces, along with the use of deeper studs — Green Build is employing two-by-six boards rather than the traditional two-by-fours — allow more insulation to be packed into the walls, cutting down on heat transfer between the interior and exterior of the home.

In addition, the builders will put insulation in the corners and around window frames. These spaces that would normally only have solid wood, which transmits heat more easily than insulation. Collectively, these steps could improve the home’s insulation by 30 percent over traditional methods. 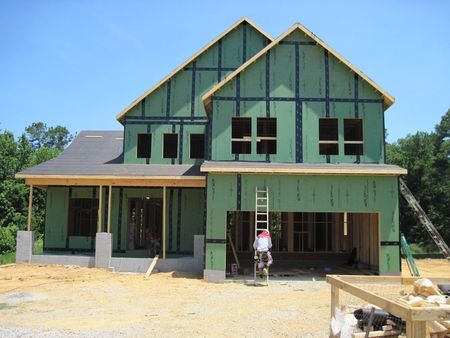 The home’s floor will be a foot above the ground, higher than is required by building codes. Frasher and Lundy said that will reduce the chances of termite damage or problems with siding.

Many other homes in the Colony at American Village were built to Energy Star standards, but these don’t incorporate air quality, water conservation or other measures that LEED for Homes and some other green building codes require.

208 Regiment will feature carpeting, glue, caulk, paint and other materials that emit low levels of fumes and gases. A fresh-air intake will also aid air quality.

Pipes outside the home will send rain water that lands on the house or its driveway percolating through the ground. Much of the runoff will end up in a storage pond in the backyard. Builders say none of the rain will go into city sewers, thus affecting that utility less than a conventional home would.

The 0.3-acre property will be landscaped with drought-resistant droughts and plants. A rain barrel will be installed so nonpotable water can be used in gardening.

The Green Build partners say they worked for months to make sure that the house’s design would allow them to provide environmentally friendly features without boosting expenses significantly. They have also coordinated with their subcontractors much more closelly than they would have for a normal house.

“Because of what we’re shooting for, it’s imperative that they all work together,” Lundy said.

Uwe Schlueter of Apex’s All-Max Plumbing is one of the subcontractors. “Normally, you just go plumb the house and that’s it, because it doesn’t matter where you run anything or how you run it, as long as you meet code,” Schlueter said.

Not so with 208 Regiment. He and other subcontractors met twice with NC Green Build before the house went into final drawings, he said.

“We went through and discussed everything, because I gave them some ideas about the branching of the system, making sure that they knew everything that they could possibly get the most points for so they could get the LEED certification, with controlling costs at the same time,” Schlueter said.

LEED for Homes mandates that hot water lines run no further than six feet from the hot water heater. To accommodate that, the home’s mechanical room is on the second floor. (Despite that, the builders don’t expect a significant increase in noise.)

The LEED program requires that all pipes be insulated. Moreover, air ducts and water pipes are inside the home’s “thermal envelope,” rather than in an attic or crawlspace where the temperature is different than inside. That again helps to minimize energy consumption.

208 Regiment Way will get low-flow toilets, faucets and shower heads. The plumber estimated that occupants of the house would consume about 25 percent less water than in a conventionally built residence.

Moreover, the LEED for Homes code encouraged Schlueter to seek material produced with renewable resources where possible — a standard he acknowledged most plumbing suppliers are not yet meeting. It also required the boxes in which materials are shipped to be recycled. Schlueter said All-Max does so anyway, but that isn’t a concern for many contractors.

Similarly, the home can also get LEED certification points for using materials manufactured within 500 miles of the construction site. 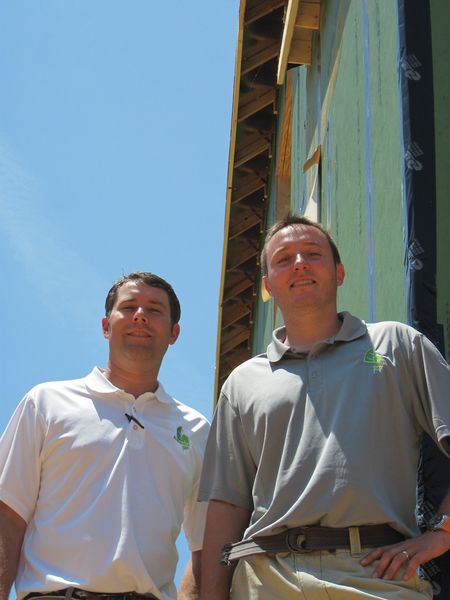 When the house is done, it will be subject to testing to verify how tightly it and its ducts are sealed, one measure of energy efficiency. But Lundy believes that in the future, such tests will be routine when people contemplate purchasing existing residences. That should give the owner of 208 Regiment an advantage, the builder asserted.

“You buy a house that’s going to meet these requirements, in 10, 15 years, you’re fine,” Lundy said.

So ... the city is going to waive their stormwater fees, right? :)

This is a smart way to build and will save the future homeowner a lot in utility bills. It is far easier and cheaper to build this way to begin with than to go back and renovate an existing home.

It would be great to see these same concepts applied to new homes in the $100-150,000 range. The initial extra costs will be offset by lower utility costs in just a few years.

I would like to hear the experts thoughts on the air circulation within the house. I've always heard conflicting information regarding insulation and sealing of houses.

I hope in Part 2 you'll also talk about how restoration of old homes in Durham is probably the very best "green" building that we can do for our community!

Sun River Builders built us a very reasonable energy-efficient 1400sqft cottage in 2009. It wasn't built to LEED standards, but we ended up with a HERS score in the 70s and we definitely save a ton on utilities.

Glad to see more of this type of construction being done, and not just in the buzzword sense.

Regarding air circulation, what most of the more energy efficient homes have been doing the past few years and most likely this one too, is make the house as tight as possible and use an Energy Recovery Ventilator, which pulls in fresh outside air and uses an air to air heat exchanger to transfer as much energy as possible from the conditioned air to the outside air.

They can be seperate units that can even be retrofitted to an existing home or built into the HVAC system.

Old houses rarely had mold problems due to the amount of fresh air naturally coming in, but of course that is all oncontrolled and unconditioned air which makes for drafts and the HVAC to work harder. Doing it with an ERV allows you to know how much air is coming in and control its distribution in the home.

Thanks Lee! That makes a lot sense.

Why are all these builders using wood sticks? Where does the wood come from? Is cutting trees renewable? Have American builders forgotten brick and stone?

@ "Why are all these builders using wood sticks? Where does the wood come from? Is cutting trees renewable? Have American builders forgotten brick and stone?"

So under the veneer is the same "skeleton' of wooden 2x4's or 2x6's. A brick or stone veneer is mostly maintenance-free, but much more expensive than wood siding. Concrete products like Hardiplank are a good in between option.

So they finally caught up with building techniques that are about 8-10 years old?

Yeah, you'll have to dig around to find the information but these "standards" have been around for a while now. Tons of PDFs that can answer your questions,especially around ventilation and "moisture control".

TLDR edition for our area here:

Oh and call me when they aren't building $325K houses.

What about passive solar design?

@ alicia A,
cutting trees is renewable, if it's the right kind of fast-growth high-strength tree that can be harvested and replanted. and of course, bricks and stone are renewable as well, but it's a multi million year process.

We just had all of our ducts sealed and new insulation installed throughout the house. We also had all of our windows replaced. It was expensive, but the house was warmer while we ran the furnace less in the winter and we haven't even needed air conditioning this summer. I guess time will tell if our energy savings were more than the cost of our upgrades. For someone who doesn't want to spend a huge amount a great, inexpensive way to improve your circulation and therefore lower energy costs is to simply use a fan. Some good ones can be found here http://www.bestoscillatingfans.com