A $30,000 Leaf should soon be alighting on the Great Lawn at Durham Central Park.

“I think it’s going to energize the east side of the park,” said Ellen Cassilly. She’s a Durham Central Park board member and an advisor to a dozen North Carolina State University master’s of architecture students who have designed and will build the structure.

It will double as a shady seating area and a performance stage, and it may also allow a projection screen to be hung from or mounted on its eastern side. The object will feature built-in wooden benches and a foundation and steps that can double as seats. The structure can also accommodate a canopy to block the sun; the canopy can be adjusted or removed as needed.

The object measures approximately 37 feet long by 17 feet wide. The upright wooden fins that define but don’t enclose the “building” will stand some 14 feet tall.

It’s been dubbed the Leaf due to the shapes mimicked by the collection of fins as well as the by concrete pad around which they will be arrayed.

“Sculpturally, this thing is absolutely beautiful,” said Erik Mehlman, another advisor to the N.C. State class.

“I’m still completely enamored of this,” he added.

Not everyone has welcomed the idea of the proposed structure. Lee Ann Tilley, who owns Acme Plumbing and Heating and is also on the Durham Central Park board, found that out last week.

On June 9, Tilley sent a message to the listserv of the Arts & Business Coalition of Downtown, or ABCD, asking members to check out the project’s Kickstarter page. That provoked some dismay among readers, who worried that the proposed structure would transform the park. (The Leaf’s design was just released this week.)

When the idea for the shade structure first came up, Tilley confessed, “I was skeptical. I had the same questions that the folks on the listserv had. I said, ‘Wait a minute, what is this?’ ”

In fact, the structure will occupy around 600 square feet, and it’s been designed with an eye toward preserving the view, Cassilly said.

“It’s only about slightly more than a couple of parking spaces, just to give folks a sense of the scale,” said Cassilly, the owner of Ellen Cassilly Architect in Durham.

One thing she did for the N.C. State class was position a bamboo pole on the Great Lawn and photograph it. That prompted the height of the structure — initially pegged at 20 feet — to be reduced to keep it from dominating the landscape.

Cassilly and Mehlman are among a group of five instructors for that N.C. State class, a design-build studio being taught over the summer term. The other teachers are Randy Lanou, who like Mehlman is an architect at Durham’s Studio B/BuildSense; Scott Metheny, an on-site job supervisor for the same pair of companies; and Aaron Trudo, a freelance architect.

The class runs from late May through early August. The goal is for the students to finish erecting the Leaf by the end of the studio.

“They’re drooling at the mouth every day to work on this thing,” Mehlman said. “The kind of the energy and invigoration that you’re getting out of grad students is phenomenal.” 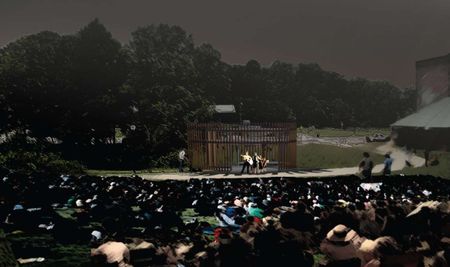 Funding for the Leaf is coming from multiple sources. Duke Energy provided a $12,000 grant. Some $4,700 has been pledged to the project through Kickstarter; the goal is to reach $13,000 in pledges by July 23. Park trustees will help cover the remaining $5,000 or so needed to build the structure. About $1,000 was collected for the cause last weekend through raffle sales at the Independent Weekly’s Best of the Triangle party.

Because design and labor for the project are essentially being donated, the park will get its addition at a discount of some $50,000 to $70,000 from what the structure might normally cost.

The project can also be built on the quick and on the cheap because it won’t have any electrical systems. Including them would have significantly slowed the building permit review process as well as added to the cost.

If all goes as planned, the Leaf will be the first step in bringing to life a nature interaction area called Wanderland. Other features will include a climbing mound, positioned by the Liberty Arts Pavilion and the brick warehouse wall that bounds the north edge of the Great Lawn; a grass maze; a “creepy crawly zone”; a snake-shaped path that will spill recycled water from its mouth into a tributary of the Ellerbe Creek; a “splash garden”; and another path that will enable park goers to stroll beside the creek and beneath the existing bridge.

These elements will become part of an evolving park, which recently saw the installation of four benches and two picnic tables.

Allen Wilcox helped found Durham Central Park and serves on its board. He too had some anxiety about the way the new structure would alter the park.

“When we first started talking about building a stage there, which was what the original gift was earmarked for, I was afraid it was going to be kind of this platform that would be great for moments when we were having performances, but the rest of the week would be just kind of in the way,” said Wilcox, an epidemiologist. “And instead what the students came up with is a structure that is attractive and appealing and I think will draw people to it and provide a quiet place for people to sit when you’re in there and provide just another artistic focal point for the park.”

Like Mehlman, Wilcox said that the Leaf has the air of a sculpture, not just a building.

“It’s a more adventurous design than we’ve done in the park before,” Wilcox acknowledged. “I expect some people are going to have critical things to say about it, [but] any piece of public art raises those kind of concerns.”

Still, he said, the park’s diverse 28-person board reacted as one to the Leaf’s design. When presented with it Wednesday morning, they unanimously voted in approval.

Who's maintaining the structure? Who pays for the upkeep?

Great questions Geoff. Just like all of the the other improvements in the park, the structure will be maintained by and all upkeep (including power) taken care of by Durham Central Park, Inc., the non-profit that was founded to create, build and look after the park. The majority of this comes from private fundraising efforts (such as our popular Meals from the Market events held in the Fall) and the many hundreds of hours of volunteer time that folks from all over Durham put into keeping the park looking great. The City assists with lawn mowing and trash collection, but everything else is handled by and through DCP.

I, Subcomandante Beaver, am not pleased! Had you read my manifesto, The Uncomfortable Beaver, you know that all that is needed are 'public' meetings and full-sized soccer fields. I chew on your leaf in disgust!
I go back to our damn collective to struggle some more in our commons!
I wonder, however, is it true what they say about struggle? That if you struggle too much you will grow hair on your palms and go blind?

That's great news both for aesthetics and personal enjoyment at the park. There's never enough shade around, if you ask me. I look forward to seeing the final result, and I wish the N.C. State students best of luck.

I volunteer to help trap these beavers and send them to a zoo.