For 14 years, Dogstar Tattoo Co. has been putting its mark on Durham. By month’s end, it could be ready to move into a new home that may be nearly as permanent as the patterns its artists imprint on clients.

Dogstar Tattoo moved from its longtime Ninth Street storefront to Golden Belt Arts last fall. But its current lower-level spot on the east side of Golden Belt’s Building 6 is a temporary location. Around month’s end, the shop should move to a suite in the southwest corner of the same building.

The move will also coincide with an increased emphasis by Dogstar Tattoo Co. on community service, about which more later.

The new space has about 1,900 square feet and occupies a prominent ground-level location near Main Street. “I really am confident that we’re going to do just fine upstairs,” said Kathryn Moore, owner of Dogstar Tattoo Co.

Visibility wasn’t an issue on Ninth Street, but Moore had issues with the location. “It was really old, pretty run-down, really energy inefficient,” she said. “I was having to fix everything. And so I’ve moved in with a company that is taking care of all of that and upped the ante where we’ve got an efficient HVAC.”

Parking is also more convenient at her location, according to Moore, who said she has signed a 10-year lease at Golden Belt. 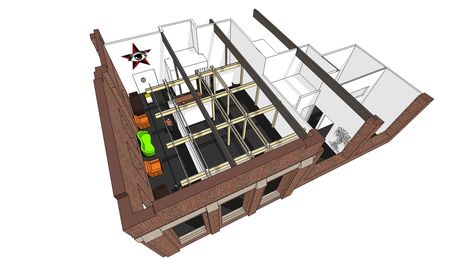 Moore described the design as “an Asian-industrial mix.” She called her collaboration with Center Studio Architecture, which designed the renovation, a “great fit aesthetically.”

Will Rhodenhiser serves as project manager for Center Studio Architecture on the Dogstar upfit.

“It’s a really nice old warehouse space that has great brick walls, huge windows, lots of light, tall ceilings,” he said. “We really wanted to make best use of what is existing and make something fun and cool that people want to go [get] a tattoo at.”

The refurbished area features a partial wall separating the lobby from tattoo booths. Moore wanted this area to make clients feel at ease.

“A lot of people come with their friends, and it’s as much a social activity as it is a private activity, and she wanted to accommodate both of those,” said Scott Harmon, a partner in Center Studio Architecture.

On the other side of the wall, artificial lighting will rest atop a trellis. Curtains can be hung to divide the booths. The design will admit some natural illumination to the tattoo spaces because the building’s windows extend above the seven-foot-high privacy wall.

There will be three separate rooms: one for piercings, one for sterilizing equipment and one to serve as an artists lounge. An office is located on a mezzanine, giving its occupants a view of the public space below. 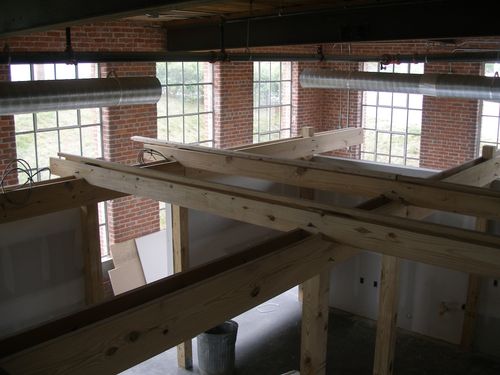 Dogstar Tattoo Co. will have a soft start in the new suite before holding a grand opening celebration on June 17. That coincides with one of this year’s Third Fridays, when the studios in Golden Belt’s Building 3 are opened to visitors curious about the Bull City arts scene.

Moore is hoping to have food trucks as well as local bands and local brews on hand for the event.

Kueber is pleased with the demand for lofts and artist studios at the complex, which opened nearly three years ago. There are waiting lists for both types of spaces, he said.

Having the Bull City Connector provide free bus service along Main Street between Golden Belt Arts and Duke has helped fuel interest in the complex’s lofts and has also helped bring in crowds on Third Fridays, Kueber said.

Which isn’t to say that everything has been hunky dory at the complex.

“The office and retail components have been slower to heat up,” Kueber said. “Part of that is just the economy in general, particularly with regards to retail. And part of it is overcoming people’s inherent prejudice against places east of wherever their comfort line is, whether it’s Brightleaf or Five Points or Mangum Street.”

Despite that, the complex does host not only Dogstar Tattoo Co. but the Cotton Room, a banquet hall, and LabourLove Gallery.

Kueber’s biggest frustration stems from his efforts — thus far fruitless — to lure a restaurant to a roughly 4,000-square-foot space across the hall from Dogstar’s new home.

“We definitely saw a downturn in business, without a doubt,” after the move, she said. “We are seeing it pick back up. I think part of the issue is people are still a bit unfamiliar with Golden Belt, so finding it was difficult for some people.”

Moore, a Durham native, recalls a period when working around the old Golden Belt textile factory was synonymous with engaging in criminal activity. But she compared crime data before making the move and found her old and new neighborhoods to be indistinguishable in that regard. She’s also been happy with security at the complex.

There are some other pluses about the situation. Many newer Durhamites have no negative associations with Golden Belt, Moore said, and she’s retained a healthy chunk of her client base. 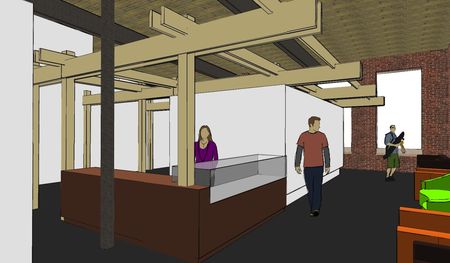 Moore’s clients, old and new, have been fueling a new charitable initiative that she says is the largest Dogstar Tattoo Co. has ever mounted. It’s called Tattoo for Japan, and it’s part of a drive to donate $2,000 to the Red Cross for tsunami relief in that nation.

Moore credited a Granville County tattoo artist, Stephanie Tippett, with the idea. Customers who pay $20 can get a tattoo of kanji — specifically, of a Japanese symbol for love — which would normally cost $50. Because artists are donating time and supplies for the fund drive, all of the money clients pay for the kanji tattoos will go to charity.

Dogstar Tattoo Co. is more than halfway toward its target of 100 kanji tattoos, according to Moore.

“It has been my goal prior to that disaster to gear my shop up to do community and essentially social work,” Moore said. “And I felt like Golden Belt was going to be a really good place to do that. And it is, they’ve been really supportive.”

Moore’s shop has occasionally traded tattoos for charitable donations before, but she plans to make it a regular feature going forward.

Tattoos for Japan excepted, most of the charities Dogstar has helped have been local. Had she not been in the midst of her current effort when the tornados struck last month, Moore said, she likely would have launched an effort to help local extreme weather victims.

and no Bill Fields to deal with. that guy is the scurge holding Ninth Street back, and from reaching its potential as a truly dense interesting hub (and the Medical Arts Complex on Gregson and...)

Dear Bill, fix up your properties and get tentants in them, or sell the properties instead of letting them languish/rot.

@Stacey: You're absolutely right. Oh--and Bill, pay for trash service and quit jamming your trash into the public trash cans on 9th Street.

Thanks for the great writeup of Dogstar and Golden Belt, Matt. We're excited for their new space to completed and open. I just wanted to also mention that, in addition to those you've mentioned, BIkram Yoga Durham is our other significant retail tenant - they've been a wonderfully successful addition to Golden Belt.