Bull City Rising
About Archives @bullcity
Downtown BID gets Council endorsement at 7 cent rate -- for now
So, Raleigh, now it's *you* caring about what's going on downstream?

Brownstones lux-townhouse site offered up for sale; will denser residential or a parking lot follow?

A few years back, nothing could get the hackles up of many Trinity Park residents as fast as the controversy over the old McPherson Hospital site -- both the Main and Watts parcel that holds the remnants of the historic old institution, and the parking lot across the street behind Papa John's Pizza that served the site. 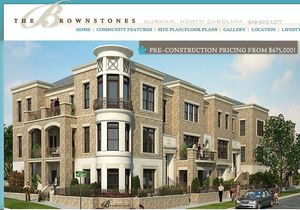 Mind you, folks were agitated on both sides of the equation on the onetime boutique hotel and condo project proposed for the site. Some neighbors opposed the project over concerns of the proposed density of a condominium building to be known as The Chancellory, with opposition increasing after the "boutique hotel" site was sold after entitlement approvals to a Raleigh firm that develops Marriott properties nationwide.

Other residents supported the project, including the fairly dense condo proposal, as bringing more residents and life to the near-downtown area and helping in turn to drive demand for local businesses, and as being similar in size and scale to multifamily projects like the Beverly Apartments that formerly existed on the site.

The Chancellory condo project came to naught in its circa-2007 form, rejected after a long controversy with the adjacent Trinity Park neighborhood. In its place came the luxury townhouse project known as The Brownstones, which itself hit the market right before the housing market crashed later in 2008.

A proposed Residence Inn by Marriott seems to be moving forward on the McPherson Hospital site itself. But whither the Brownstones?

Withered, perhaps. Developer Lou Goetz has the property listed for sale on LoopNet for $1.25 million, in a land-only transaction.

And in an interesting twist, Goetz notes that recent Durham ordinance changes -- those, we presume, that followed the recent changes to downtown zoning -- now allow "unlimited density" by right.

The $1.25 million question: will a buyer take advantage of changes in downtown zoning and seek to build a larger residential project here? Or will the highest and best use of the land be in support of the hotel across the street? 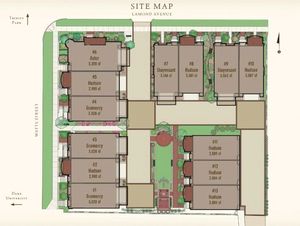 Goetz's proposed Chancellory condo project would have, as initially designed, reached seven stories in some sections; that was scaled back in later designs, but the height and size (more than 30 units on a .8 acre lot) was still anathema to some, even though Trinity Park is home to pockets of build-up like the Governor Apartments, itself purported to be the densest site in Durham.

The Durham Board of Adjustment rejected height and density permits for the site back in 2007, limiting the site developer to a smaller-scale project on the site -- 13 units maximum, by right, without having to go through the public hearing process.

And a year later, Goetz filed plans with the City for a 13 unit luxury townhome community on the site, to be known as The Brownstones.

When we say luxury, we mean "luxury" -- there's a reason the developer chose names like the Gramercy for the floor plans. The units were sized at 3,000 square feet-plus, with initial pricing from $850,000 to over $1 million.

Ah, but the heady days of summer 2008 were followed soon thereafter by the financial crash and the fall of Wall Street. (Well, fall until they were bailed out by TARP, but the big banks had to sweat it out months -- months! -- waiting to get their bonuses back.)

Anyhow, marketing of the Brownstones has continued for the past two years, with the website now listing "pre-construction pricing" starting at $675,000. (Hey, Goldman Sachsers... you can get a luxury townhouse in Durham for less than a studio in TriBeCa!)

And the property website is still live -- but so, too, is an entry at LoopNet, the popular commercial real estate listings site, with Lou Goetz of Park City Development listed as the contact for the sale.

From the web site:

The property is an existing parking lot, that at one time was limited to 13 residential units. The City of Durham ordinance has changed and now allows an unlimited density. Could be used for either apartments or condos and will need parking below the building. Property is adjacent to the Duke University Campus, one block from Brightleaf Sq., a retail center of shops and restaurants, and within the Trinity Park Neighborhood, a beautiful Urbanist walkable neighborhood of tree lined streets and renovated and restored large homes.

So what's next for this site?

Certainly a residential or multifamily developer might be able to make good use of it, particularly with recent changes in zoning that have indeed allowed for higher density on the 110 Watts St. site.

The Brownstones site and the McPherson Hotel site are literally just under the wire, both falling under the Downtown Design-Support 2 (DD-S2) zoning designation.

That designation does allow unlimited density of units, subject to an overall maximum height limit of 50 feet; the more-urban DD-S1 designation would allow between 100' and 250', or even higher in the Core district of downtown.

Unlike core or DD-S1, the addition of planner-preferred amenities doesn't allow for any "bonus" height, so 50' would appear to be a hard ceiling. Still, the ability to build as many units as desired within that 50' level would certainly allow designs of more than the originally-entitled 13 units. 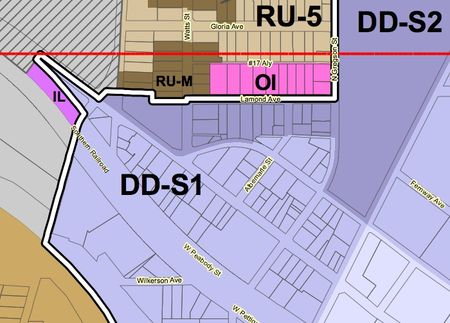 One challenge economically: the likely need, for market-demand purposes if nothing else, to add underground parking to such a site. That tends to bump up costs, to put it mildly.

On the flip side, the lot is probably big enough to build a central deck wrapped with residential, as proposed for Ninth Street North and as done successfully at Station Nine and the Lofts at Lakeview -- but could you then build enough residential units to justify the ROI?

Note that in the DD-S2 district, according to the Unified Development Ordinance, there doesn't appear to be a requirement to provide any parking at all; that said, residents of apartments or condos would certainly demand off-street parking before buying or renting a unit.

Still, there's another intriguing possibility for the lot: Would the lot be attractive to Concord Hospitality as parking for the Residence Inn project proposed across the street?

As of fall 2010, the Residence Inn was planning to shoehorn about 70 parking spaces onto their lot across Watts St. from the condo site; that would include some spaces in a parking area concealed within the complex's ground floor. (The complex would be built around and include the original hospital.) Other spaces would be available on a surface lot.

But the Brownstones site would seem to be perfect for an across-the-street parking -- though with the downside of losing density on one of the larger unbuilt/underutilized properties in the vicinity.

Posted by Kevin Davis on May 03, 2011 at 08:37 AM in Commercial Development, Downtown, Local Government, Renewal & Development, Residential | Permalink | Comments (4)

The history of this particular property can be read here at Gary's place:

Seems to me it's partly an object lesson in how misguided vehicle parking requirements often lead to unintended consequences. The beautiful houses that were there in the early part of the 20th century were demolished to create... a parking lot... for the now-demolished McPherson hospital annex across the street. And even after the current real estate down-turn ends, my guess is that the tax/financial constraints on such a property will only support a high-intensity development there.

Durham's version of Donald Trump, without the charm:

Goetz says: The site is now zoned for ”Unlimited Density”. So what? It is still constrained by a height limit, design guidelines, and the market’s need for off-street parking. The biggest offenders were its height of Seussian proportions and the lack of places for all those people to park, put their trash cans, etc. It wasn’t the density so much; It was that it was an incomplete project that would have injured the neighborhood. And it broke the rules to do so.

Trump would say “I didn’t make a greedy grab that an oversized project that backfired, I didn’t try to dupe the neighborhood with my bogus density-by-right claims of 36 units, I didn’t shoot myself in the foot by not taking the neighbors offer of 22 units before the BOA defeat, I didn’t get slaughtered at the BOA hearing, I didn’t blow hundreds of thousands of dollars in design fees ... No, no , no – I cleverly pretended to do all those things so I could wait for it to be zoned “unlimited density” so I could then sell it at a loss. I’m very proud of myself for this.”

Now a days property is an existing parking lot, that at one time was limited to 13 residential units. The City of Durham ordinance has changed and now allows an unlimited density....