Admit it. When you talk about your favorite Triangle metropolis, you focus on certain things and leave out others. When you’re trying to convince an out-of-towner of the merits of the City of Medicine, for instance, you’re apt to brag on the Gothic gorgeousness of the Duke campus, the delicious dining at the Federal or the lovely lines of the Performing Arts Center.

There’s plenty of stuff that boosters, however fair-minded, tend not to play up about Durham. There’s virtually no reason in the world why you’d draw attention to the rundown duplex at the corner of Roxboro and Geer streets. Since Tire King moved out of its one-story building at Rigsbee and Hunt in 2009, you probably haven’t given the empty structure a second thought. And if you’ve even mentioned the old office building facing the courthouse, Social Services high-rise and First Presbyterian Church in conversation over the last 15 years, it was to ask when the derelict would either be torn down or restored to usefulness.

In other words, all three of those buildings are more embarrassments than assets. But if building improvement grants that the City Council awarded Monday night to the trio of vacant structures have the desired effects, each could shed their eyesore status and become productive parts of the community.

Kevin Dick heads the city’s Office of Economic and Workforce Development. He summed up the philosophy behind the building improvement grants this way: “In general, taking any dilapidated space and upgrading the utilization of it is very positive.”

(We’ll discuss two of the projects below; a separate post on the third building improvement grant should be up later today.)

Peter Skillern is head of the Community Reinvestment Association of North Carolina, which owns 1201 N. Roxboro St. The duplex lies across Geer Street from the association’s headquarters, a two-story apartment building that has been converted into office space.

“Part of our strategy has been to take care of one property at a time,” Skillern said in explaining why his organization’s local rehabilitation efforts have been focused on that block. 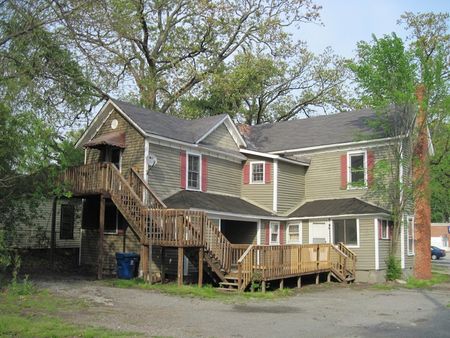 A recent state Transportation Department traffic survey showed an average of 7,400 vehicles per day traveling north on Roxboro between Corporation and Geer streets, with some 6,900 counted on the block of Roxboro immediately north of Geer. The department found 4,000 autos a day traveling Geer between Roxboro and Mangum.

The association got the house at 1201 North Roxboro two months ago in a transaction in which the prior owner, Soles & Sharpe, donated part of the property. The association paid about $32,000 in cash, compared to the $90,000 value assessors assigned to the building and its 0.3 acres of land, county records show.

The upstairs apartment had been vacant since last year, but the downstairs was occupied until last month. Skillern said there was enough detritus left downstairs to fill two trucks. The stench of urine still lingers inside, however.

Outside, the house’s paint is starting to peel. Parts of the retaining wall on the Roxboro side of the property are bulging and disintegrating. 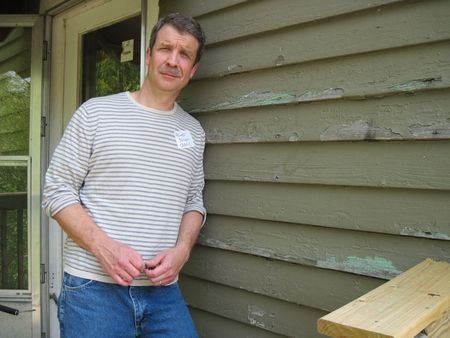 Skillern’s plan is to remove virtually everything but the house’s foundations and weight-bearing elements, demolish an expansion on the western side and refurbish the remainder as offices. The building’s available space, rated at 2,500 square feet by county tax records, would drop to as little as 1,600.

Given the nature of the neighborhood — Skillern said the area averaged more than 100 calls annually to Durham 911 over the last four years — 1201 isn’t a viable residential property.

And while a commercial developer would never try to rehabilitate the structure, Skillern claimed, it’s perfect for his organization.

“The return on equity just doesn’t justify it,” the executive director said of rehabbing the building on a for-profit basis. “This is a property that will help to help redevelop the neighborhood.”

The city will give the Community Reinvestment Association $75,000 once the refurbishment has been completed and properly documented. The work must be finished by April 2012. (The same conditions, including grant amounts, apply to the other two award recipients approved Monday.)

The total cost of construction on the former duplex will come to about $189,000, the association told the city when it requested the grant.

Dick and his staff backed the grant for 1201 North Roxboro as well as grants for the buildings at Rigsbee and Hunt and at Roxboro and Main.

“The occupancy rate in downtown for office space is so high, and the availability of office space in North-East Central Durham needs to be enhanced,” Dick said. “So we suspect that [this] would provide benefits.”

The work planned for 502 Rigsbee Ave. is in some ways the most radical of the three grant-funded projects. That’s because the new owner, ClearSense Properties, plans not just to rehabilitate the structure in question but to add a second floor to it.

ClearSense was formed by Clear-Vue Glass along with contractor BuildSense and Studio B Architecture for the purposes of remaking 502 Rigsbee. The glass company, now located at the corner of Morgan and Gregson, would occupy part of the ground floor of the refurbished building, while the architecture and contracting venture would move from its Foster Street headquarters into the new top floor of the structure.

“The upfit of that space is going to create the ability for two established businesses in Durham to locate there and also improve the appearance of that location as well as the value of the space,” Dick said.

502 Rigsbee Ave. has been empty since mid-2009 when Tire King moved two blocks south, to Morgan Street between the YMCA and McDonald’s. 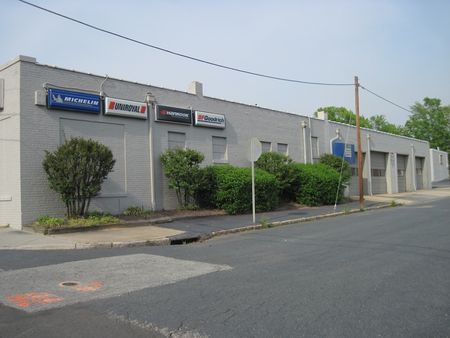 The total cost of the renovation and expansion work was pegged at $965,000 in ClearSense’s application for the city grant. The 6,300-square-foot building, which dates to 1945, was purchased by ClearSense from Jerry Horne for $355,000 in February, per county records. (Under city building improvement grant rules, property purchase prices must be excluded from construction costs and may not be reimbursed.)

The structure is on the same block as a Durham police station. It’s across Rigsbee from the Central Park skateboard park; the southern side, on Hunt, faces the Center for Senior Life.

The intersection of Hunt and Rigsbee, however, is a bit lifeless. Tire King’s counterparts are the vacant lot by Vega Metals and the skate park, a senior center parking lot and a whole-block parking lot.

“That corner desperately needs some activation,” Studio B Architecture owner and BuildSense partner Erik Mehlman, a longtime architect, said at a meeting of Partners Against Crime District 5 before ClearSense submitted its application for the city grant.

The new home for Clear-Vue and Studio B/BuildSense is also near the site selected by the Durham Central Park co-housing community for their proposed build-out of private condo units with in-common great room, kitchen, guest rooms and the like.

If you read the City Council agenda materials closely, you may have noticed references to two other grants that weren’t voted on Monday. Dick said that Tom Bonfield, the city manager, could make decisions on them (which wouldn’t require council authorization) within a few weeks.

One of the pending grants involved the repair of the Samuel and Sons Barber Shop at 2110 Angier Ave. Seventy-five percent of the structure was damaged in a Jan. 2 fire. According to a grant application owner Samuel Jenkins made to to the city in February, an insurance payment of $90,000 would cover less than half of the $195,000 cost of repairing the shop.

But Jenkins’ repair costs dropped below the $187,500 minimum it needed to be eligible for a building improvement grant. Instead, Dick said, Jenkins is now pursuing a retail and professional services grant. An award of this type, which the city formerly called a merchandise-based incentive grant, would provide up to $15,000 to make permanent business-related property improvements.

Two other important decisions remain to be made by city officials about business grants. One is whether Durham will make another round of grants before the 2010-11. The second is whether the city will renew the program for 2011-12.

“We would like to be able to offer the program” next year, Dick said. “Based upon the success of it this year, it is something we are evaluating.”

Bonfield and his staff should choose a course of action on both matters soon, since the fiscal year ends on June 30 and the manager is scheduled to make his proposal for next year’s budget on May 16.

The rehab of 1201 N. Roxboro will be a big win for everybody who lives on or near this intersection of Roxboro and Geer. Good stuff!

I'm quite concerned about "us" investing our tax money in the former Tire King building.....I wonder if the property has been checked for environmental issues resulting from having housed an automotive repair facility for many years. While Tire King is a local company with a seemingly great environmental record...you might imagine there was oil dumped in the drain or on the ground years ago!
I don't think I would us to invest in a building to be inhabited if it had possible contamination underneath it is my point.

@Flynn-
The Durham Co-Housing folks did an environmental assessment. I don't remember the results, but perhaps they would be willing to make them public?

Who funds these grants? The taxpayers of corse. If somone is not willing to invest private money then the project is not worth it. If someone could make money they would have already done it.