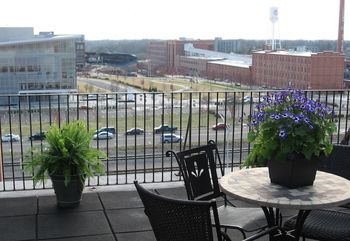 When the Baldwin Lofts project started in the mid-2000s, Michael Lemanski was the company's only employee, and the former downtown department store's rebirth as residential lofts over a restaurant or some retail was by no means a sure bet.

There were some residential units in the so-called "city center" district, but little had been developed in some time, even as West Village showed the popularity of downtown rental properties.

But as far west as Mangum St., there wasn't any of the street-level life like restaurants and bars that could be found in Brightleaf Square. American Tobacco was under construction; the DPAC wasn't a sure bet; the downtown streets were tired and rolled up after 5pm.

By the end of the Baldwin Lofts project, Greenfire had purchased several properties, including the adjacent Kress Building with an eye towards owner-occupied condos; the company had also added its first outside paid employees. And by 2007, Jim Anile was linked to the Baldwin as the eventual proprietor of the restaurant Revolution the following year.

SInce then, Greenfire has had ups (acquiring a significant chunk of the City Center, successes with the Kress and Rogers Alley projects) and downs (delays in getting the Hill Building and Woolworth site redevelopments underway.)

But to hear the company describe it, the news this weekend that Greenfire would be converting the Baldwin Lofts project to condos (web site) is a sign of optimism in the local housing market -- as well as a sign that this project is ready to be closed out.

Lemanski told BCR in an interview on Monday that the West Main Street rental units, which have been eligible to go condo since October 2010, were planned from the start with the flexibility to be marketed for sale to owners; good sound isolation and washer/dryer connections in each unit were built into the plans. "Our intent was always to give ourselves that flexibility," Lemanski said.

Until last fall, though, two tax credit programs kept the units in the rental market. Financier Self-Help had taken New Market Tax Credits on the Baldwin Lofts project, which blocked resale in the first seven years' time since the project started.

Meanwhile, the project qualified for historic preservation tax credits, which lock-in against resale for five years from project completion.

Additionally, by law tenants have to be given a chance to purchase their units during a rental to ownership conversion. Lemanski said that Greenfire approached tenants in the Baldwin starting last fall to gauge interest in buying units.

Three of the twelve units were already under contract by the time of the announcement of sale last week, according to a press release late last week from Greenfire.

Ten of the units are studio apartments, generally from the mid-600s to low-800s in square footage. Two units for sale feature separate bedrooms; that includes the most expensive unit, a $350,000, nearly 1,300 sq. ft. two level unit.

Lemanski's optimistic that the properties will do well for sale, given Greenfire's ability to sell units at the Kress even as the housing market imploded during its sale period.

"There's very little supply, particularly historic properties or condos, something that has character downtown," Lemanski said. "We knew that the demand was pretty strong."

"Downtown is also a much better place than what it was, both than when we first finished the building, but also as things have progressed over the last couple of years," he added. "That increases the demand, and the higher demand impacts the prices as well."

The Kress building condos sold out at a higher price point than the Baldwin, albeit it with larger units and somewhat higher-end finishes, Lemanski noted.

Asked about the company's other projects, Lemanski said the firm is still eager to get the Hill Building's renovations downtown underway for the proposed Spark Hotel boutique hospitality project.

"We're confident we're going to be able to get it financed shortly and have some announcements to make there," Lemanski told BCR. "The lending market has clearly started to thaw, and there's a lot more interest."

And he noted that there's renewed interest in the Rogers Alley space next door to Dos Perros. The space was originally proposed for a Marco Shaw eatery, the Eno Restaurant, but that's project's fallen through while Shaw and financial backers have moved on to take over downtown restaurant Piedmont.

"We just put that back on the market when the Eno folks decided to formally walk away from that space," Lemanski said, adding that the site -- along with the old pharmacy space at the corner of Parrish and Mangum -- has "generated a lot of interest."

Dear city officials Durham, if you are really interested in bringing people to downtown to "live work and play" as you like to say you must do two things. Stop greenlighting developments like the 751 project (I realize that hasn't fully materialized yet) and other sprawling developments well outside the city center and second you must make *affordable* housing downtown. You need working and middle class folks downtown as well as the financially well off. $200k+ for less than 1000 square feet only holds value to upper middle class.

Patrick, why don't YOU build it for us, will you? Then you can give them away for free if you want.

You could buy a house in Cleveland Holloway for less than that.

Much less than that.

Patrick makes a great point. Downtown Raleigh is already becoming a residential market for the "Rich & Famous" only club. Sad to see downtown Durham going down the same path.

I cringe when I see an apartment go to condos. Sure state law says the current tenants have to be offered the chance to buy their units, but chances are most cannot afford it. (Or they wouldn't had been renters to start with.)

...but chances are most cannot afford it. (Or they wouldn't had been renters to start with.)

@RaleighRob - the need for a range of downtown Durham home prices aside - it's not like they just took some Section 8 housing and flipped it for quarter million dollar condos. I'm sure the rent on those apartments weren't cheap.

It's incorrect to assume that someone is a renter because they can't afford to own. Not to mention that renting was the only option in this building until now.

If the press release claims that 3 of 12 units were under contract before the announcement, it is a decent assumption that these are current tenants.

Hopefully this sale means that Greenfire is trying to raise capital to get started on another project.

It's not about charity, or anything against free enterprise.

The point i am trying to make is that developers and city officials often lose sight of the whole point of downtown redevelopment and that is to bring people back to downtown. All people. Alienating the majority of the population with premium housing will only continue to push people outward.

If they can bring middle and lower middle class people to be not only owners and renters back to downtown, additional businesses (think Walgreens, Harris Teeter or the local equivolents) will find a viable marketplace and lot of those empty spaces will fill up and *THEN* they can start raising prices on property.

Right now, the values of those homes are inflated an unsustainable. We've seen it in the real estate market for a while now. Short term gains with no long term vision in tact.

I agree with Patrick in that much of the housing downtown is unaffordable at $200,000+ for <1000 sq ft. At least if you have lower or middle class income family with children. All of these downtown condos are similar in price and are geared towards well-to-do singles or couples without kids. Which is fine, but it seems like everybody goes after the same demographic.

Natalie is correct that if you are looking for affordability close to downtown, East Durham or Cleveland Holloway is the way to go. Plenty of affordable homes there that need some love and attention. The only problem with that is that you need the money and time to complete a possibly extensive renovation to get the home move-in ready. Take a look at some of the blogs on BCR's list and you will see what I mean.

@Andy My partner and I bought an abandoned home in Cleveland-Holloway and have slowly been renovating it over the past 3 years. Yes it takes time, and money, but we lived in one room while working on the rest of the house and it made owning a home a possibility, and much less expensive than buying downtown or in Trinity Park.

"All of these downtown condos..."

Did I miss the sudden glut of expensive condos in downtown Durham?

Affordable housing in/near downtown is a real issue, especially as home values in neighborhoods like Cleveland-Holloway and Burch Avenue go up, but I think this is being blown a little out of proportion in this instance.

I hear a lot of people say that they'd rather have people living downtown than in far-flung suburban neighborhoods so that downtown businesses can be supported and people drive less, etc. But at the same time the few downtown loft condos that exist should all be affordable? Huh? Name me one other city where a historic loft in the HEART of a revitalized downtown is "affordable". It's not realistic and it's not necessary. As others have pointed out, there is still plenty of affordable housing in and around downtown Durham.

Whether it will still be that way in five years is a subject worthy of debate. Whether Baldwin Lofts should be affordable? I'm not buying that one.