The N&O and the Herald-Sun both have very good coverage this morning of the ongoing negotiations over the future of the Durham Convention Center, which has for fifteen years been operated by Shaner, the management firm responsible for the attached Marriott hotel.

That deal has drawn more jeers than cheers from local leaders over the year; though a new GM at the downtown Marriott has been credited with improving operations and satisfaction with the hotel, city and county officials -- who subsidize the loss-leader center -- have groused that the center requires too large a public subsidy, and that the joint hotel-convention center management deal to Shaner had allowed the hotelier to commingle hotel and convention center operating expenses, with public funds helping to meet facility costs. 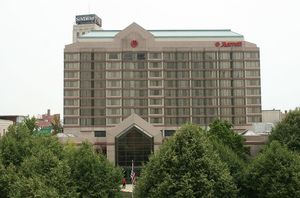 Shaner has fought back, with the company's CEO flying to town for lobbying efforts and a last-minute revised bid for the facility management that saw some elected officials say it was too little, too late; the hotelier replied that it always thought its contract bid was a starting offer.

Be that as it may, the papers report this morning that the County Commission voted last night to allow county leaders to negotiate a management agreement with Global Spectrum, a Comcast-owned company that operates sporting arenas, convention centers and other public facilities.

A City Council vote on the management change and a final negotiated agreement acceptable to both governments is a prerequisite for the change going through; some BOCC members signalled that Shaner's much-ballyhooed possible loss of Marriott branding could lead them to rethink their position, a point noted well in the Herald-Sun's coverage.

Bring back the Omni.