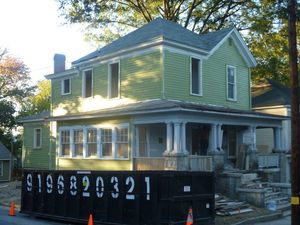 We've talked here before about Cleveland-Holloway, the near-downtown neighborhood that's been perhaps the most-impacted by the revitalization of downtown in the past decade.

Once one of the wealthiest in-town neighborhoods in Durham's early days, Jim Wise notes in The Durham News this week, the neighborhood found itself decaying in the post-World War II era.

Changing demographics and a push to suburbanization took their toll on many urban Durham neighborhoods; some, like Trinity Park, were able to press against rental transitions and maintain a key stock of owner-occupied properties, while Cleveland-Holloway found itself suffering further even as downtown decline took root in the 1970s on.

But the renaissance of downtown and a renewed interest in urban living have made the area, which sits just to the northeast of downtown, ground zero for a number of new residents looking to set down roots in the urban center -- and, many hope, to find a rapport and coexistence with the long-time renters who immediately predated them in the east Durham community.

This Saturday's third-annual neighborhood home tour will provide a look into a number of Cleveland-Holloway homes, and a chance for those interested in the neighborhood to find out more about it.

But beware: you might find yourself tempted to buy a house, as Adrian Brown and Keith Flynn did after last year's tour.

They walked into the Clapp-Ferguson House at 501 Oakwood, a structure dating to sometime between 1908 and 1913, during the second annual neighborhood tour.

"We remember going into that house and thinking it was beautiful, yet frightening," Brown says. "I think we entertained for a brief moment, could we buy this house and renovate it? Did we have the bandwidth?"

"We just didn't have the wherewithal to do it," Brown says. 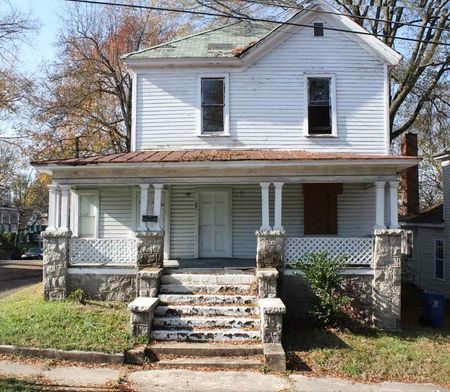 They loved the neighborhood and the sense of community they saw -- a community that has worked to be inclusive of both long-term renters and residents as well as new owners -- though the house was a fairly daunting task.

"I remember not feeling comfortable because I felt like the floor would cave in," says Brown, as a portion of the house had seen nine inches' settling of its foundation. "It was literally caving in."

Brown, who works in marketing for the Durham Chamber of Commerce, moved to Durham from Atlanta thirteen years ago and initially settled in Forest Hills, which he calls a "great, great neighborhood." But he and Flynn, a Wake County schoolteacher, wanted to be closer to Durham's center.

"I think having been at the Chamber now almost two years, and being downtown every day and meeting the people down here and getting connected to the vibe here downtown -- it's infectious," says Brown.

And when Brown and Flynn noticed a house for sale near downtown in the MLS this summer, they drove out to see it, not realizing until they got there that it was the same house they'd toured in the fall.

Ken Gasch, owner of the neighboring house and a real estate agent who's been one of the advocates for Cleveland-Holloway's transformation, had purchased the home and done some of the renovations already. "That's when we really got interested, and just decided to jump."

They sold their house in Forest Hills -- quicker than expected, necessitating a temporary move to The Eleanor downtown -- and now stand just a few weeks from move-in.

Brown and Flynn found a lender in Harrington Bank that was familiar with the neighborhood and open to offering a construction-to-perm loan, with Gasch continuing to manage the renovations with contractor Miles Honeycutt. 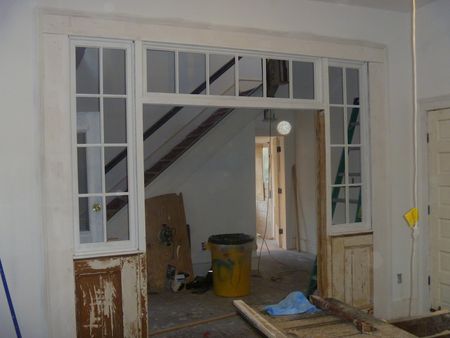 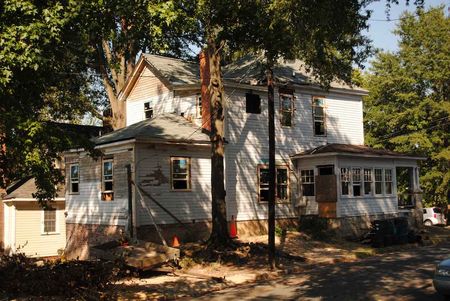 A discussion of Cleveland-Holloway isn't complete without a recognition of the inevitable social change that happens when a neighborhood that's been perceived as down on its luck attracts new, homebuying residents -- something that was the focus of an Indy article (and BCR response) a couple of years back before the first home tour.

Many of the houses picked up to date, like the Clapp-Ferguson house, have been targets for demolition in the past and are getting new life through homeownership. Others, though, have supported rental housing that is feared likely to be lost with any transition back to owner-occupied uses.

A number of Cleveland-Holloway residents have expressed a desire to balance neighborhood renewal with the preservation of affordable housing options; a meeting last year, for instance, saw skepticism over what was feared to be a group home for troubled youth with questionable supervision, but relatively favorable interest in affordable-housing provider Builders of Hope's interest in the neighborhood.

(And as we opined here in 2008, there's an easy dichotomy between the idea that changes to a neighborhood can either "benefit" or "displace" residents; personally, I don't think it's an either/or, having argued in the past that concentrated poverty levels such as those only recently seen in Cleveland-Holloway create negative social externalities for everyone, and that you need to find ways to restore appropriate levels of owner-occupancy to gain some of the benefits that come from local, engaged, committed residents versus less-interested non-resident landlords.)

To Brown, he and other new-arrival residents "love embrace and want to retain... the diversity, the richness, the vitality" of the neighborhood, but not the "not-so-pleasant history" of crime that had taken root at Cleveland-Holloway's ebb.

He recalled the experience of Chris Dickey, the senior city administrator who first moved into the neighborhood in 1993, and who remembered bullet holes in the windows of the Clapp-Ferguson house. "Now that would never happen on this street," says Brown.

"People want to retain the richness but certainly not the violent component, because whether you're rich or poor you want to bring up your family in a neighborhood that's safe," Brown says.

"I hope that the neighborhood can find a way to protect that diversity," he adds. "I don't know what it is. I'm sure there's a landlord there that's sitting on a property, and doing the bare minimum, keeping people in it and collecting his rent. But when property values get to a certain point, they're going to flip it."

"That's the part that I don't know that we have a lot of control over," Brown says, adding he'd like to see non-profits come in to buy some of those properties to improve and rent them out at income-controlled levels.

Amidst the attention that's always paid to preserving Cleveland-Holloway's current residents even as the neighborhood enters a new era, and to the newest entrants to the neighborhood like him, the group that's come between the two need to be recognized.

"A lot of people refer to us as though we're pioneers. I say no, I don't think so; we're hanger ons," Brown says. "There's Sheldon Galloway who's been there ten years, another couple who are musicians who've been there five years," and adding that residents have used local neighborhood money to even save some houses from demolition. "Those people are the ones who've really shaped the neighborhood and made it what it is for someone like us, for it to register on our radar."

Brown tells us that one prominent local realtor gets a call a week about opportunities in the neighborhood.

I'm glad to see this house resurrected and in the hands of caring owners who are committed to the neighborhood.

This house has been neglected for far too long.

Great post! Thanks for capturing the nuance of our neighborhood. We hope others come out to see what all the fuss is about!

Thank you for writing about our neighborhood & home tour! Great job too as Dudek noted of detailing the gray nature of neighborhoods in transition.

Nice post, thanks from a new Cleveland Holloway neighbor. I so agree with Adrian's comment -it's infectious!

Welcome to the neighborhood Tiffany!