Farmhand Foods to debut with "Sausage Wagon" at Fullsteam

Another day, another foodtruck? 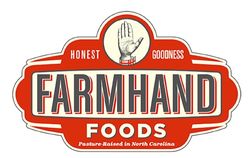 Maybe, but this one is working to link the locavore trend with the locomotive nature of food trucks. (Or is that loca-motive now?)

And it's part of a concept for which the foodtruck is merely the tip of the iceberg -- or is that just the rump of the pig?

Jennifer Curtis and Tina Prevatte have announced the launch of Farmhand Foods, a new venture that spun out from NC Choices, a Center for Environmental Farming Systems program at NC State seeking to grow market opportunities for Tar Heel State pork producers.

Farmhand Foods will work to provide a processing and distribution infrastructure to allow small-scale local farmers to have access to market -- something that economies of scale make difficult, given the slaughterhouse nature of eastern NC pig farms that produce your meat en masse.

Farmhand will pay farmers a premium price for meat raised humanely and antibiotic- and hormone-free, including suppliers in Orange and Granville Co.

And they'll work to bring the meat to everyone from local area retailers to restaurants.

But first, they're hitching up the Sausage Wagon, which will debut next Thursday, Oct. 28 at Fullsteam Brewery.

As the co-owners note in their press release:

“The Sausage Wagon is a fun and interactive way for us to introduce our brand, ourproducts and our farmers to area food lovers,” says Curtis.

The wagon plans to roam Durham and the Triangle with regular weekly stops at the Farmers’ Market, Fullsteam and other high traffic locations. The mobile eatery will serve an assortment of sausage sandwiches and other items created by local chef Drew Brown, co-founder of Durham’s Piedmont restaurant. Area diners can find the whereabouts of the wagon at www.farmhandfoods.com.

Brown, of course, is only the latest of the Piedmont progenitors to percolate a new business idea, though this is the first of the porcine variety. (Andy Magowan, another Piedmont founder before its sale to the Eno/Zely & Ritz team, has adopted the beloved gas station at Foster & Geer for a beer garden and restaurant, as we noted here recently.)

Look for the Sausage Wagon at Fullsteam next Thursday the 28th from 5:30pm on.

And get ready, as the announcement of Farmhand Foods suggests, to (m)eat local.

I think it's too early to be casing the joint.

not the wurst idea i've heard...

I'm happy to say that The Sausage Wagon has asked to be part of this year's (4th!) Annual Zombie Lurch!

So look for the wagon near the gathering point pre-Lurch, as well as possibly at the Zombie Lurch After-Dance party at Monkey Bottom Collaborative on Trent St in OWD.

I'll be looking forward to checking out the wagon.

I've never sau-sauge a thing before!

^You guys rival the creative masterminds behind the South of the Border billboards.

It's bound to be a wiener!

Thanks for the link, Kevin.

It was only a matter of time... Farmhand, we hardly knew yee, it's been a slice:

@Molson-
What makes you think that the vendor is not fully licensed?

Food truck vendors can easily become licensed to sell food in North Carolina, provided that they meet the health code. All of the food truck vendors I've eaten at in Durham (and it's been a lot) are fully licensed. Look for that inspection certificate right next to the order window. It's there.

Really? The snarky/rude tone is one thing, but do you really think all our beers are gag-inducing? We strive to offer a wide range of beers that appeal to a broad palate.
Reviews so far have been positive, both on-site and on BeerAdvocate.com:
http://beeradvocate.com/beer/profile/23145

And what does your statement mean, anyway? That Farmhand Foods will also be gag inducing? Have you had any of their offerings?

Man, the Internet can be such a bummer sometimes.

Sean, don't take it personally. On the internet, you can hear a pinhead from all the way across town. Besides, that's coming from a guy who's last name is synonymous with bad beer.

Most of us are much more firmly in this camp:

Sean - you have the empty bottle honor in our house right now. We have more unreturned empty growlers of your fine brew than unreturned Maple View Farm bottles sitting under our sink right now.

You're right, I apologize for the tone and will remove the snark. MHO: Fullsteam has a handsome product and I was really looking forward to it. We had a party with 20 guests and 3 varieties, and the consensus was what was in the bottles was not ready for prime time, certainly not at the price charged. I have since tried Fullsteam again, and I remain unconvinced. I have also received opinions from two associates who brew beer. They did not like it either, one compared it to PBR at a premium price.

Not to knock down the new kid on the block... I love the concept and am hoping that when I try it again in a few months they will have improved. For now, it's just not agreeable to my palate. One person's opinion.

@ Rob: I wasn't questioning Farmland, merely an observation that county health departments across the Country are looking at food trucks with greater scrutiny (see Times piece 2 weeks ago): a golden age may be passing.

(sorry for the threadjack)

If you're interested, you and any of your friends who expressed dissatisfaction are most welcome to join me in an informal guided tasting at our tavern, my compliments. With beer styles that range from a basil farmhouse ale to a hickory-smoked porter to a chocolate stout, I'm flummoxed at the comparison to PBR.

We do have one beer, El Toro cream ale, that fits that description, but that's intentional -- we wanted a simple beer that served as a "beer beer" for those patrons who don't want a complex craft beer. I'd like to think that's the exception, not the rule.

Again, please email me at sean@fullsteam.ag if you are interested in an informal tasting. Ball gags optional.

Horrible swill....unsuitable for human consumption...bleech!! (see you at the tavern)

John: FWIW, I think one of the things that has some people not embracing Fullsteam is that it is a substantially different aesthetic of beer than most American craft brewers right now. This isn't the only difference of course, but I think one of the major ones is that "craft brewing" right now seems to be synonymous with "hopped up until you can mistake it for a jackrabbit," a fad I absolutely abhor and can't wait to die. (The "Belgian-styled with crazy-ass spices in it" fad also needs to perish, and soon.)

Fullsteam's styles are fundamentally unlike 99% of American craft brews. (Please share the names of the folks who called it PBR at a premium price, because I never, ever want to drink their beer.) The tastes that are in Fullsteam I find to be ones that I've rarely, if ever, encountered in other beers, a welcome break from the, "oh, look, another IPA that tastes like grapefruit juice" trend. The Carver, Farmhouse Basil, Carolina Common, and Hogwash stake out spaces in beer that frankly I didn't know beer could go to, at least outside of some of the more esoteric Bavarian weissbiers I've had. That's dangerous, because I have some friends who've done some work on the history of beer, and people's tastes tend to run largely to what's familiar, which Fullsteam's isn't. Some people may like the direction it goes (me! me!), others may not. Still, failing to recognize the innovation is frankly the sign of a hop zombie.

I drink Fullsteam on a weekly basis, and really enjoy the tavern space. That being said, I do have a hard time enjoying most of their beer. The Carver is solid, especially after a day or two in the fridge (Anyone know why?). IMO, hickory smoke flavoring has no place in beer, and I guess most of them are a bit to bittery hoppyish for my admittedly unrefined beer palate. I'll continue to buy Fullsteam regularly, but I'm not going to be a hometown homer about this and say the don't have room for improvement. Michael. :D

Beer advocate ratings that you can count on one hand don't really mean anything.

My friends and I (numbered at around a dozen) all think Fullsteam has plenty of room for improvement. There isn't a single beer that I really enjoy---yet. We're all in agreement about our dislike of the new stout. There seems to be a very unwelcome fruitiness, like it got contaminated by Belgian yeast. I'm a huge, huge fan of stouts---dry, export, milk, oatmeal, oyster, Russian imperial---but that one just misses. I enjoy a wide variety of beer in addition to stout (not a huge fan of overly hopped stuff or many Belgians---though I do like Flemish reds), and I just don't think most of their styles are there yet. That doesn't mean that I don't think that they will get there eventually, or that I'm going to stop drinking the beer or visiting the brewery. It just means that there are kinks that need to be worked out, kinks I'm willing to taste-test for as long as it takes. For the record we thought Triangle was VILE when it first debuted, and now I like a few of their beers quite a bit. Anyway, just because it's different doesn't mean it's good. Sometimes something hasn't been done before for a good reason. At any rate, they've only been open for a few months, so I fully expect that the beers will continue to evolve and improve over time. Like Michael, I refuse to be a "hometown homer"about this---I think it does a disservice to a business when people refuse to say that something needs improvement when it clearly does.

i like fullsteam, and i like pbr. they both have a place at the bar! (thread jack continues, sorry)

If I may bring this discussion back around to the Sausage Wagon, we at Farmhand Foods are having quite a time finding a kitchen that we can use as a commissary. In order for us to operate the wagon in Durham we are required to work in partnership with an inspected kitchen that has a few things that most professional kitchens usually do not: extra room and an external mop sink. Until we find someone that will rent us a little corner of their facility that fits the bill we won't be able to get inspected and that means no sausages for any of you.
Rest assured we do have a temporary permit for next Thursday at Fullsteam so we will most definitely be there. Does anybody have any thoughts on kitchens that might be available for use by a our wagon? Thanks and be specific.

We really look forward to seeing you next Thursday!

This is a long shot, but I know that Jeff Ensminger at a Wandering Feast maintains a commercial kitchen for his catering business, and might be amenable to a kitchen-share arrangement of sorts. I have no special knowledge here, but it might be worth contacting him.