The annual meeting of owners/members of the Durham Central Market cooperative grocery store project was one part community gathering, one part imagination -- and one part preparation, as owners heard the first of what will likely be a series of pitches for an upcoming capital investment campaign to get over the hurdles standing between the initiative and its goal of a Weaver Street Market-style store for Durham.

A crowd of sixty or so were present for the start of the annual meeting, which was preceded by some envisioning of where the actual market would someday stand on Mangum St. at the corner of Broadway at downtown's northern edge. 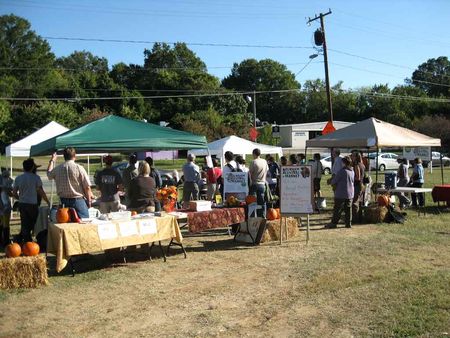 That envisioning came in the form of red flags marking off the proposed 10,000 sq. ft. store here, a grassy outdoor seating and eating area there, and parking over there, and the back of the house and loading dock over yonder.

The goal was to make more concrete a project that's still be in the visioning stage for a couple of years, given -- as co-op board leaders explained -- a recessionary environment that's been hard on both lenders (who might a few years back provided easy construction and working capital) and developers (who might once have built the store and allowed the co-op to lease space.)

In the present economic conditions, though, Durham Central Market will need to raise a goodly chunk of the dollars needed to build the market and get it started.

And as yesterday's owners meeting made clear, once the co-op hits its goal of 1,000 owners (at $100 each), an investment campaign will be the next step.

Not that finances and pro formas have clouded the dream that brought the group together in the first place.

Co-op board president Michael Bacon noted that he had driven out to the Weaver Street Market in Hillsborough for lunch that day before the board meeting. "Sitting there was a reminder about why we're doing this," Bacon told the assemblage.

He reminded the group that Downtown Durham Inc. had worked to entice a national-scale grocer to Durham, only to be turned away by chain after chain that didn't see a market big enough to fit their targets.

"Weaver Street Market and this organization proved to me it is possible to build a store when national chains say no," Bacon said. "It's about taking control of what we want and what we need here in Durham."

Bacon said that the co-op's taking out an option on the proposed site for the market just north of downtown represented a major accomplishment after a long site selection, adding that a survey of members found that over 92% of owners would shop at the store's proposed location.

The board president acknowledged that the Market is almost three years past its initial founding, and that its initial goals to have been open by now had proven to be an overly "optimistic" timeframe.

Noting that the meeting was happening within the proposed building envelope, "I'd be standing in front of the produce section right now" if the original projections had held.

But the worst recession since the 1930s got in the way, Bacon said.

Don Moffitt -- the one-time Whole Foods Market southeastern regional executive who's a project manager for the for-profit, member-owned Durham Central Market effort -- told BCR after the meeting that an increasingly conservative lending and development environment means the initiative will need to take the lead in constructing its own facility.

Moffitt estimated that the market would need to raise $2.5 million to get "in the ground" with a store, with 40% or so of that -- $1 million -- coming from owners themselves through an ownership investment campaign.

The total project cost, including working capital for initial inventory and to subsidize operations until profitability, likely approaches $4 million. And to get there, the Durham Central Market board plans a significant capital investment campaign.

Board member and investment campaign chair Stephen Hren noted that the Market's first goal is to reach 1,000 owners; today, the count stands at about 770, in the wake of regular lobbying through venues like the Durham Farmers' Market, the Festival for the Eno, brochures at local businesses, and paid advertising.

After reaching 1,000 owners, the Market plans to kick off a campaign to raise additional funds targeting owners who'd like to invest further in the project.

Owners (who already are entitled to a profit share from operations) would be able to take an enhanced equity stake in the project through either preferred equity shares or by loaning funds.

The presence of an active base of owners shows community buy-in and a core base of loyal customers, Hren noted -- though the market will be open to shoppers from throughout the community, not just members -- while also providing a "pool" of resources for initial capital.

As to the Durham Central Market's site, a one-acre site at the corner of Mangum St. and Broadway owned by Trinity Lofts developer Alex Washburn, Moffitt acknowledged that the co-op would likely need to be its own developer, in the absence of a third-party developer who might otherwise construct a mixed-use facility incorporating other retail and perhaps residential while leasing back space for a co-op.

"If we're developing it, we're going to build a grocery store," Moffitt said, given that the co-op's mission is in creating a community market, not in undertaking what would likely be a much-bigger development mission than the current $4 million project.

Moffitt acknowledged that the current plan is a for a relatively suburban development model despite the urban environment, given the 60 parking spaces described by external consultants as a must and the fact that the 10,000 sq. ft. store itself would occupy just under a quarter of the one-acre site. (A 3,500 sq. ft. outdoor eating space, patterned on Weaver Street's popular outdoor space at its original Carrrboro home, is in the offering as well.)

Still, Bacon noted the current plans are to build the store up to the sidewalk at Mangum St.

And throughout the presentation, neighbors wandered over across Mangum from the burgeoning Cleveland-Holloway neighborhood to the east for whom the market would be a pedestrian destination.

Similarly, Bacon noted the arrival of Motorco, Fullsteam and a number of newly announced businesses just to the west.

Together, the Mangum/Broadway site stands at the nexus of those two areas, and between the resurgent downtown to the south and neighborhoods like Duke Park and Old North Durham on its other side.

Will the co-op be able to become a new point of interest in the area?

In this case, it's not just a figure of speech to describe that as the million-dollar question.

Thanks for covering this and thanks to all who have been doing the groundwork to push this idea towards reality.

Seeing as they are already at nearly 800 owner shares, and the share is only a hundred bucks, I would hope they could actually reach 1,500 shares by the end of the week.

This could be really great. Hopefully momentum will keep building.