Much to do for the trick-or-treating Durhamite 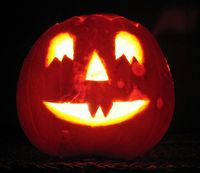 'Tis "the season" to count down the days until "the season".  Those that are eagerly awaiting the commencement of this year's holiday festivities, or those just plain distraught over this week's spell of Indian summer, have quite a few events to keep them occupied this weekend.

All weekend long, the Durham Jaycees will be hosting their 38th annual haunted house.  Each night will benefit a different Durhamn charity, with tonight benefitting the Kramden Institute.

Saturday's patrons will see their proceeds going to Durham's Ronald McDonald House, with Sunday having a Duke vs. UNC theme.  Now in its thirty-eighth year, this iteration of the Jaycees Haunted House is making its home in the Shops at Northgate (1720 Guess Rd.) Hours are 6:30pm-11:00pm all three nights.

Saturday kicks off with the seventh annual Cree Habitat for Humanity Halloween Bike Ride.  Saturday’s event is one of two annual bike rides that benefit Durham Habitat for Humanity.  As in years past, this year’s ride will offer three distances, with each route beginning and ending at the Durham Bulls Athletic Park. The 31-, 62-, and 100- mile routes all feature full support from the Durham County Sherriff’s Office.

Pre-registration is now closed, but walk-up riders can register beginning at 7:30AM for a $45 fee.  Those looking for a preview of the routes can find them, along with more information, on Habitat’s web site.

A second bike-themed event, and a new one for this year, is Durty Durham’s Halloween Alleycat ride.  A decidedly more social and (marginally) less athletic event, the Alleycat is a bike-based scavenger hunt in and around Downtown Durham.  Registration, which will cost you $5, begins at 2:30 in CCB Plaza.  The race takes off at 3:30, and will wrap up at Fullsteam Brewery for an after-party that begins around 6:00.  Both costumes and helmets are strongly encouraged.

Saturday will also see the fourth annual Durham Zombie Lurch. To the uninitiated, lurchers can participate as zombies, zombie hunters, or willing victims. The lurch will follow a 1.5 mile route, starting in the parking lot across from the Piedmont (401 Foster St.). An after party will follow at Monkey Bottom (609 Trent Dr), complete with Farmhand Foods’ Sausage Wagon to satiate any lingering hunger for flesh.

Sunday’s events begin with a special screening of Nosferatu at the Carolina Theatre.  The Carolina has obtained a rare 35-mm print of the 1922 silent horror. The performance will feature accompaniment by the Mallarmé Chamber Players, who have written a new score for the film. The show starts at 3:00, with tickets ranging from $12.50 to $15.00.

The Fun Zone, Downtown Durham’s drop-off child care service, will be hosting a free Halloween party from 2:00 to 6:00 on Sunday.  The event will include treats and beverages, games, and a bounce house.  The costumed party is geared toward those under 7, and all children must be accompanied by an adult.  The Fun Zone is located at 104 W Parrish St., with the entrance to The Fun Zone on the Orange St. side of the building.

Also that afternoon: Hallow-Eno, the holiday celebration by Durham Parks & Recreation up at City-owned (for now) West Point Park on the Eno, 5101 N. Roxboro Rd. 6:30-9:00pm is the time for the event, which is described as being for all ages.

Another event for all ages will be Trinity Park’s Halloween Story Time.  The stories start at 5:00, and a costume contest will award a prize to the best-dressed youngsters and those simply young at heart.  Trinity Park is located at the corner of Watts St. and Trinity Ave.

And for those that want to get a head start on burning off their candy over-indulgence, The Pinhook's dance floor will give you a chance to get the ball rolling.  The Pinhook is hosting their Tricked and Treated dance party Sunday evening.  The party, which will feature both DJ NoneOne and dj 2PerCent, starts at 10pm. The event has a $5 cover.

Neighbor "hosts" are designing their signs and gathering treats for our youngest trick-or-treaters.

We'll be receiving the wee ones starting at 4PM on Sunday October 31.

Here's the list of names and addresses as of Friday 12:15 AM EST. (List delayed due to World Series on regular cable. Go Giants!)

Cleveland + Hollow'een is going to be better than all that :)

I think the Toddler Trick or Treat on Oakland is meant to be a small neighborhood event . . . .??

Cleveland + Hollow'een? :)is there anything special going on?