After more than six months of construction, Durham now has another new music venue.  Motorco Music Hall, a 450-person music venue in the Durham's Central Park district, is set to open its doors for the first time tonight. 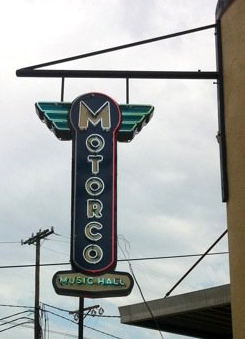 he second music venue to open in Durham this month, fresh on the heels of The Casbah, a 300-head club in the Brightleaf Square area.

First introduced to the world as The Geer, Motorco Music Hall is a collaboration between Chris Tamplin, Jeremy Roth, and Mike and Candy Webster.  With a capacity of 450, the new venue will be the fourth-largest daily rock venue in the triangle.

Booking at the new venue is being headed by Chris Tamplin, who was formerly in charge of booking the Local Band, Local Beer series at Raleigh's Tir na nOg.  The series became quite successful over the last three years, with Tamplin eventually becoming responsible for booking music 3 nights a week at the bar.  Tamplin's experience booking Tir na nOg led him to meet Motorco's three other partners, who were in pursuit of opening a new Durham venue.

The group has spent the last six month renovating the Weeks-Allen Motor Company building at the corner of Rigsbee and Geer.  After countless hours of hard labor by the group, the new venue is ready to open.

Tonight, Motorco hosts a CD release party for the Chapel Hill band North Elementary.  The venue has a second show  slated for tomorrow night, featuring Luego and The Huguenots.

Although all are excited for the new venue to open up at 723 Rigsbee, Roth warns that tonight's party will indeed be a soft opening.  Motorco is waiting on their ABC permit, the last of the hurdles to complete before fully opening.  Music fans shouldn't fret, however, as Triangle Brewing Company will be present with a selection of their beer.

We're located at the corner of Geer & Rigsbee. Capacity should be set at 560 - just waiting on the official card from the fire Marshall. Tonight is gonna rock.

Music in Durham is an awesome thing.

Steak N Egg how we miss ye. With "not a bar" Fullsteam already down there and more stuff coming, entrepreneurs take note: put together a business plan for a nearby "Central Park Diner" (that name is my gift to you) before it's too late. Unlike the rest of the Durham food scene, you don't even need great food (although some bloggers WILL complain), just stay open late night and keep the bathrooms (mostly) clean. Just sayin....George B. you out there?