Yours truly was first intrigued a week ago, when Gawker, Flowing Data and other web sites pointed out an interesting Flickr photostream by Eric Fischer, who reviewed 2000 Census data for major metropolitan areas and mapped out residents by race to show, visually, what level of segregation or integration existed then in communities.

Of course, these data are likely to change come 2010, as maps nationally don't show the level of Latino population that came to many communities -- including Durham, which saw a decade-long boom in Hispanic residents. But they still show patterns of residential activity particularly in term of self-identified Caucasian (red dot) and African-American (red blue dot) residents. Asian residents appear in green, Latino in yellow/orange, and gray for other ethnicities, with each dot representing 25 residents.

The initially release of metro areas didn't include the Triangle, but the latest run of maps includes Raleigh, and Fischer was kind enough to zoom out enough in his mapping to include at least the eastern side of the Bull City. (Click on the image for a larger view.) 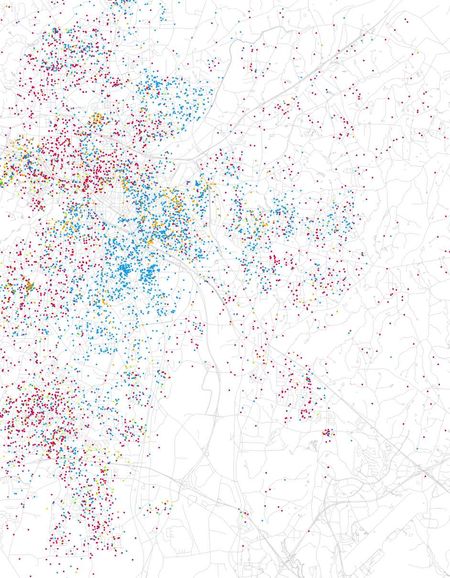 A few thoughts from the Durham cartography:

By comparison, North Raleigh (the I-440 to I-540 belt -- Brier Creek wasn't settled in '00) has African-American residents visible in most block areas but, to the untrained eye, the concentration is less balanced than in Durham, while the neighborhoods around downtown Raleigh display the same east/west division between white and black residents as Durham does. The Capital Blvd./Mini-City corridor on the way to Wake Forest appears to be the most racially diverse region of North Raleigh from a first glance. 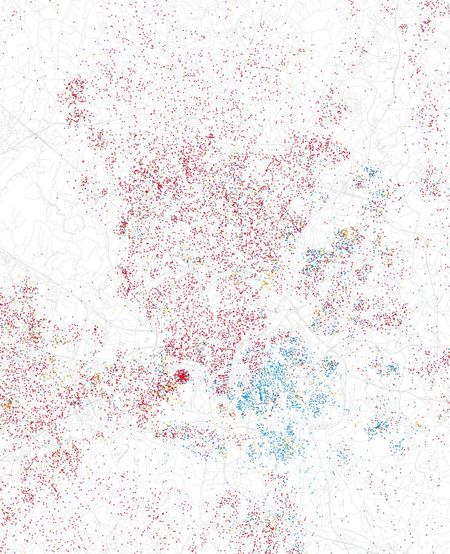 Incidentally, if you're thinking it's an accident that the southeasterly portions of the Bull City and the City of Oaks are both predominately African-American... it's probably not. Fischer's Census data graphics of Greensboro, High Point, and Winston-Salem show the same geography, which seems coincidental perhaps until you remember that our water basins all flow from northwest to southeast towards the Haw, Neuse and other rivers draining towards the coast.

Meaning that African-Americans were so thoughtfully given access, intentionally or by differential economic success, to those parts of waterways downstream from the effluent given off by white neighborhoods. (And to think some wonder why we don't have a "post-racial" America.)

The next time someone from Cary starts talking to you about how "Of course we're a diverse community, why I have South Asians and African-Americans and an M&A executive from Brazil and even a Newfoundlander living in my subdivision," kindly refer back to this graphic. 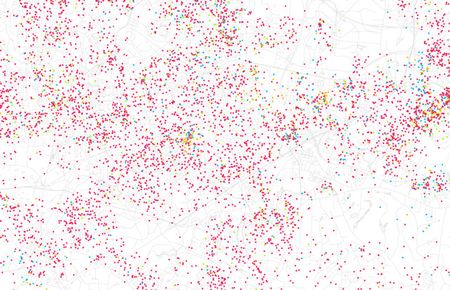 (Hat tip to New Raleigh for noting that our region now had a map available, and for cropping-out Fischer's map to make the Cary map shown above.)

Thanks for posting this Kevin. It's interesting to see.

BTW, Red dots = white and Blue dots = African American. There's a mistake in your key that says both groups are red dots.

The wastewater theory is attractive until you look at the stream flow directions in Durham at least. Neuse River watershed waters flow generally wsw-ene. SE Durham is on the drainage divide between Neuse and Haw watersheds

Kevin: not waste water, waste air. Find where the train station used to be in a town (or the switching yard, or wherever the trains waited). Now check which way the prevailing winds run. 9 times out of 10, downwind of the old station will be a minority neighborhood. This is also the origin of the word "wrong side of the tracks." Train co's also usually built the station on the upwind side of the rails.

Land downwind from train stations or sewage treatment plants or in low lying flood-prone areas was historically undesirable and hence affordable to those with limited means.

There are examples of this concept (sometimes referred to as discrimination by topography) in every town in every state in every country. I'm pretty sure you'd find a 'wrong side of the tracks' even in most all-white communities. Even in Cary.

Everything that seems unfair is not necessarily racism, not even in Durham.

Also, not just the trains, but factories. Industry used to be predominantly coal fired, and that was of course pre-scrubbing technologies. This was the original purpose of smokestacks -- to elevate the smoke up out of the city.

The water flows in Durham have more to do with geography at a tighter scale, with wealthier houses on the ridges and poorer houses in the bottoms.

I wonder how this relates to crime rates.