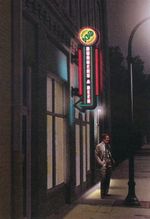 We're able at last to share word of another of the new businesses lining up to open up shop downtown.

The latest is a new concept from an old hand on the Durham business scene: Seth Gross, the co-owner of the popular Wine Authorities shop in the Rockwood neighborhood.

Gross is branching out, going back to what he says was a love before his wine days: craft beers and brewing.

Bull City Burger and Brewery is the name of the place, set to inhabit the Greenfire building at 107 E. Parrish St.

(That's the green-painted structure to the southwest of Dos Perros, set in on Parrish St. and featuring recreated advertisements on its western exterior wall overlooking the Trinity UMC parking lot.)

The restaurant, slated for opening in February 2011, will feature burgers, hot dogs and similar fare along with an on-site brewery featuring beers with links back to the history of Parrish St. and of Durham itself.

And it's not a place with small ambitions.

"We want to be someday added to the list of the great burger joints in the United States," Gross says.

Gross is planning to go local in a big way, from using locally-sourced, grass-fed, antibiotic-free beef ground daily for burgers, to making their own all-beef hot dogs on site. 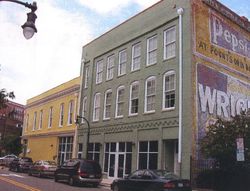 The restaurant even plans to produce its own ketchup, mustard and other condiments, along with house-baked buns.

The waste resulting from the brewing process will even be recycled back into hog feed, Gross hopes.

He announced the endeavor along with Greenfire Development's Allison Moy at a recent Partners Against Crime District 5 meeting as part of a community input process linked to a city Office of Economic and Workforce Development grant program.

Gross and Greenfire will be applying for a building improvement grant, which can provide up to $75,000 in municipal funding for developers investing at least $225,000 in renovation of structures in targeted districts to become retail-ready.

"We're applying for the building grant to try to bring down the costs of tenant improvement for Seth," Moy told the PAC5 crowd last week at Blue Coffee Cafe downtown. The space is currently in "cold, dark shell" condition, Moy noted.

Gross, who has now signed a lease on the space with Greenfire, expects to have outdoor dining in the rear of the building and a kids play area like what is implemented at Wine Authorities.

A stand-up dining bar at the front window will provide eat-and-go space for those diners who don't want to grab one of the available tables.

Inclusive of the bar area, Gross plans to provide seating for 90, along with a private dining space for meetings or events (with A/V capabilities).

And despite the beef-and-brew menu, healthy options will abound.

Veggie burgers will be available, and Gross pledges to use no hydrogenated oils or corn syrup -- even to the point that high fructose corn syrup sodas won't be sold on premises.

After its initial ramp-up period, Gross plans to have the restaurant open seven days a week for lunch and dinner.

Gross will continue his active involvement in Wine Authorities, but his passion for getting back to the brewing work he's long loved is clear, as is his excitement to be starting a venture in the city center.

"I've always wanted to have something downtown, to be part of the renaissance of our city," Gross said.

The entrepreneur brewed beer professionally under the tutelage of Greg Hall at Chicago's Goose Island brewpub; he's also a graduate of the acclaimed Culinary Institute of America in Hyde Park, New York.

But wow what a tremendous and risky undertaking. Trying to have a successful brewery AND have a successful restaurant, and add to that making hot dogs (which I think require extra FDA scrutiny) on site? It's an appealing idea, though. You go, Seth!

I wonder who else is involved in this venture. I have heard Drew Brown talk about creating some sort of brand around local meat, and even focusing on hot dogs. Perhaps he's involved in this?

Holy cow! Another brewery in Durham!? Looks like we'll be stealing "Beer City USA" from Asheville sooner than we think.

This is great news, more beer is always a good thing. The burger competition might be stiff, but if Mr. Gross is serious and puts effort (and funding) behind his idea it will be yet another great place to visit downtown.

Wow, this is great news for downtown, and always happy to hear news of another brewery. However, I would have figured that the beer-and-burger category was pretty well saturated in the CBD: Tyler's, Tobacco Road, Devine's, The Federal, the relaunched King's Sandwich Shop, and wherever the Only Burger truck may happen to park, for starters. Expand the ring by a just a bit and you can name half a dozen more. Maybe this will be so well executed that it will excel regardless, but I think he's starting on an uphill road by choosing this category.

The Wine Authorities has been a phenomenal success because of three converging virtues, in my estimation: 1. These guys know their stuff and love their customers. 2. The idea is appealing to people (estate-bottled wines you can't get anywhere else) and 3. The business model is genius. Because they're selling wines you can't comparison shop, they can mark them up however much the taste seems to justify, and customers have no idea. If you're selling Yellowtail Shiraz, everyone knows where to get it for 50 cents cheaper.

@Bryan: Interesting point; that said, I'm not positive it's going to be an oversaturation. For one thing, the demand seems to be there -- I wondered how Tyler's would do after Tobacco Road opened, and while traffic is down there a bit, it was previously mobbed at lunch and after work, and now is a more sane traffic level. Similarly, I think The Federal hits a slightly different audience than Saties or Devine's. King's should do well with crossover from Fullsteam, Motorco Music Hall, Manbites Dog, and the DAP.

The big key, I think, is that BCB is going somewhere else downtown -- activating more walkable areas in the city center, and hopefully drawing more retailers near.

Is there anything burger joints can do so they are legally allowed to serve medium rare burgers on request? If so, that would seem to help chances of more frequent diners. just curious.

Can we have one more "Bull City____" business added? LOL

no seriously, aparet from the fact that i dont drink beer, or eat beef, I couldnt be happier for a guy with mad heart for his endeavors and the people he serves. I look forward to maybe having a local chicken or turkey burger, and maybe an Italian soda at the joint :)

Still searching for a brewery that can suspend physics by producing a high alcohol, big flavor beer with < 100 calories per pint. Could this be it?

@Bval-
Physics be damned! Ethanol has about 150 calories per ounce; so a pint of 8% ABV beer is going to have around 200 calories from the alcohol alone.

That's a great space! Glad it's being used on such a great business idea. love both of those buildings...Now they just need to fill that corner lot of the yellow building...Great big windows and great location, it will fill up soon!

the only way an establishment can serve a medium-rare burger is if they grind their own meat in house. otherwise, the health code stipulates that it must be cooked to medium to kill any possible salmonella and e. coli bacteria.

I am a local fan and customer of Wine Authorities and my business is across the street from this place so am thrilled. I can tell you that we have very few choices for lunch downtown that are walking distance and lots of people down here doing business and court-related matters. So I think there IS a market.

In the not so olden days, Parish Street had a couple of bars catering to the legal folks and the Herald-Sun staff, neither of which was shy about their drinkin', so it's good to get some of that downtown energy back in this new place.

Really though, I came here for an answer to a question about 5 points downtown. Are there any plans to do something in the old "Plaza Restaurant" building on the corner of Chapel Hill Street and Morris Street?

I'm glad to see some possible night life on that street. That block of Parrish is one of my downtown favorites: if you squint your eyes real tight and willfully ignore the backside of the courthouse, you can almost convince yourself you're in Charleston.

I think the block has real potential once all the lawyers decamp to digs closer to the new courthouse.

Wow, it's like every day comes news of a new thing coming downtown...

The Wine Authorities guys are among the most inspiring people I've ever met (in terms of their sheer friendliness and general awesomeness)...This place will no doubt be great, too.

Based on the painted ads on the east side of the building, I hope they plan to offer Pepsi, Chiclets, and Wrigley's gum, all in retro packaging!