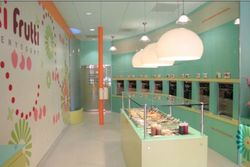 As demonstrated by the line outside Rockwood's Local Yogurt a couple of weeks back -- a dozen people deep under the shopping center shade, to say nothing of the people waiting inside -- there seems to be a never-ending reservoir of demand for yogurt with tasty toppings as a healthier dessert choice.

And, as demonstrated by that very same line outside Rockwood's Local Yogurt a couple of weeks back, that tasty treat doesn't always come instantly when you're waiting on folks to fill your cup and top it off.

Enter Tutti Frutti, a California-based chain of yogurt shops whose claim to fame is self-service. You walk in, you fill your cup from one of the wall-mounted dispensers, you add your toppings, you weigh and pay.

(Those alcoves on the wall? That's the self-serve configuration at one Tutti Frutti location. It's like an Enomatic with a slightly lower alcohol content.)

Reviewers on the social media site Yelp seem to like it and its competitors in the crazy California retail scene have been very popular, and the company's expanded to the Mid-Atlantic and Southeast with a handful of outposts, mostly in Florida.

And, soon, Durham -- where Tutti Frutti will soon open a shop in the Hope Valley Square shopping center, adjacent to the soon-to-open retail storefront of OnlyBurger, according to the shopping center's owners.

Speaking of Hope Valley Square: OnlyBurger is reportedly set to open its location inside two weeks' time or so.

I tried a version of this self-serve fro-yo in Chapel Hill a couple of weeks ago, in the same shopping center as Sage and the new Queen of Sheba. It was okay, though did feel very chain-y and not as friendly as LoYo. On the upside, just getting exactly what I wanted topping-wise, and paying only by weight made it a bit cheaper, which was nice.

I tried Tutti Fruitti in Texas, and they have the BEST yogurt from all the other 'self serve' I've been to. Theirs is a little more firm and smooth. And not to mention the variety they have. A lot more toppings to choose from also. Can't wait to try this place out! Looking forward to it!!

FYI to the recent comment readers ... I didn't know this store was open until last night when we had a craving for Only Burger. But it is open - for about a month now. Yum.