Bull City Rising
About Archives @bullcity
Kinnaird to Orange Co.: We need a Costco in the southern part of heaven
BCR's Daily Fishwrap Report for August 31, 2010

The Triangle Business Journal this week published a database online showing the intersections in the Bull City and the region where the greatest number of vehicular crashes takes place.

Unsurprisingly, the truly crash-averse would do well to stay away from interstate highways, or at least their off-ramps; the I-40/Fayetteville Rd. intersection near Southpoint has had more crashes than any other in the county from 2007 through 2009. And most of the I-40 and I-85 intersections show up in some way, shape or form.

But there's plenty of interesting outcomes in the TBJ's findings, too.

As the map below shows, North Durham -- including the Roxboro/Avondale retail conglomeration, and many of NorDur's thoroughfare corridors near shopping centers -- shows up disproportionately on the crash list.

(The ten most crash-prone intersections appear with red circles; eleventh through twentieth place are marked in orange.) 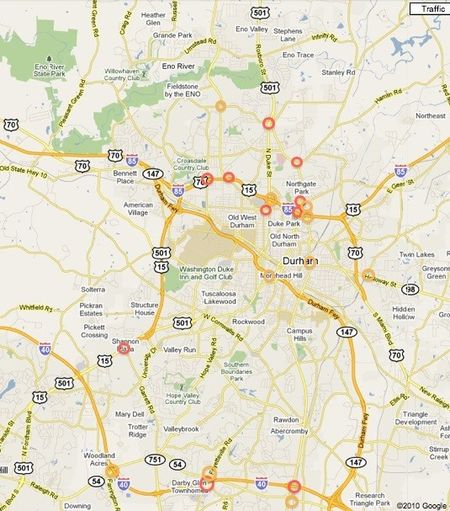 Club and Roxboro -- a terrible intersection for four-wheel, two-wheel and two-foot crossers alike -- was surprisingly close to I-40/Fayetteville, showing 116 accidents in the three-year epoch, versus 138 at Fayetteville and I-40.

Add in #3 "winner" I-85 and Roxboro (93 crashes), the #4 Old Oxford/Roxboro intersection (91 crashes), and the sixteenth-place Avondale/Foushee and Avondale/I-85 spots (63 crashes apiece) and, well, you've got way more bad motor mojo happening in a relatively moribund retail corridor than you have at Durham's busiest mall.

Similarly, the oft-hated 15-501 corridor doesn't show up hardly anywhere on the top-crashes list, save for a #9 placement for Garrett Rd. and 15-501 where the bypass slows to a traffic light. Duke/Horton, I-85/Guess and Club/Gregson near Northgate are all more crash-prone.

We wonder whether some of the crashes around I-85 resulted from the widening project on the highway -- but that largely ended in late 2006, with just wrap-up going into spring 2007.

If you discount the fact that some of the interstate corridor crashes happened on the highways themselves, you have to look at the Roxboro Rd. problems -- and those on Horton at Duke and Guess, and the Junction Rd./Holloway and Alston/Holloway intersections -- and ask, what is it that makes those parts of town so much more likely to see crashes.

So much more troublesome, even, than the high-volume roads like 15-501 that carry tens of thousands of vehicles along?

You ask about the accidents at Horton/Duke (87) and Horton/Guess (70). We live between those intersections on Horton and have seen lots of accidents. At the Horton/Duke intersection there are gas stations on the three corners with people pulling out in all directions. Pulling out of the Shell exit onto Horton is particularly dangerous. At the Horton/Guess intersection, there is a hill which hurts visibility. On Duke, Horton, and Guess, people drive very fast and I have only once in three years (on Guess) seen a police car checking speeding. Another serious problem is that there is no sidewalk on Horton.

Andy nailed it. There are often pedestrians and cyclists on Horton and there simply are not adequate bike/ped facilities for them. The hill, parking lot emptying to the hill in both directions, and often short light timing at Horton/Guess also contributes to the problems there. It is bad enough in a car...I sometimes ride my bike through the intersection on Horton to get to/from the greenway, and it is definitely not a good one to go through on a bike!

No surprise about the Fayetteville St-I-40 intersection taking top honors. It's a confusing nightmare!

I worked near the Duke/Horton intersection for 10+ years, driving roads in that area daily until about a year ago.

There is a lot of turning traffic at and near the north Durham intersections listed by TBJ because of the many driveways for shopping centers, gas stations, and fast food restaurants. Combine that with:
- inadequate or non-existent turn lanes,
- left-turn signals that cause backups into travel lanes by only allowing turns with a green arrow,
- traffic that cuts thru shopping centers to avoid long stop lights,
- relatively high speed thru traffic,
- a number of pedestrians and poor sidewalks.

That combination simply leads to a lot of accidents. My car was hit a couple years ago at Duke/Horton by someone who was so anxious to make the left turn light that they sideswiped me while trying to squeeze into the left turn lane.

It would be great if some of Durham's very limited transportation dollars were dedicated to intersection improvements in the areas with the most accidents - especially where there is little hope of developer-funded improvements.

Northern Durham's roads don't necessarily need a lot of new lane miles. What they do need are improved intersections with better turn lanes and signals, more sidewalks, and a bit of speed limit enforcement.

"and a bit of speed limit enforcement"

hear hear! why Durham Police don't police and enforce driving infractions is a mystery. That is part of their job no?

I'd be curious what percentage of accidents were caused by people running a red. I'd bet money it is over half.

I think the I-40/Fayetteville intersection is a nightmare for two reasons:
1. NCDOT's "X-shaped" intersection (which kind of makes it like the old figure-8 dirt race tracks), and
2. the fact that 99.9% of drivers in the area do not know (or do not care) that it is illegal to go right on a red arrow (and those trying to go right on red often don't see that speeding car coming diorectly at them from the other side of the 'x', at a strange angle)

Not that our roads don't need improvements... but does it seem weird to anyone else that we're dedicating a $20 million dollar bond to making our roads faster... and how much are we willing to dedicate to making them safer?

I used to drive from 85 and up Roxboro to Old Oxford every day. Roxboro is just a terrible road, I ended up taking Duke St instead and crossing over to Roxboro on Murray. Roxbooro is bad because there are lots of stop lights and there is no turning lane for those wanting to turn left onto the many side roads/store parking lots which creates for lots of sudden stops and swerve arounds when people are just stopped in the left lanes waiting to turn.

Regarding the "right on red arrow" question, it is in fact legal to do so, as long as there is not a sign stating "No turn on red."

Here's a link that clarifies things.