Bull City Rising
About Archives @bullcity
Bulls to DAP: Let's play two, as 2011 nostalgia game announced
Kinnaird to Orange Co.: We need a Costco in the southern part of heaven

Update: The Indy has a short but spectacular piece of research on this, noting that Somerhill owes almost $200,000 in back rent -- and over $275,000 to artists that sent the gallery work on consignment, to be paid upon sale. Rowand, meanwhile, has continued to draw his monthly salary during bankruptcy, to the tune of nearly $180,000 per year. Read more over at the Indy's web site.

A BCR commenter noted this on Friday, but it bears repeating: downtown art destination Somerhill Gallery has changed its Chapter 11 bankruptcy filing to a Chapter 7 liquidation, the Herald-Sun reported last week. 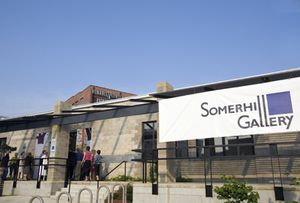 Such a filing would seem to imply the closure of the gallery's Roxboro St. location near the Hendrick car dealership and the new courthouse site, though we don't have that on record or confirmed in any way.

BCR attempted to contact gallery owner Joe Rowand on Friday for comment but a message to speak with the founder hasn't been returned as of this writing.

(We didn't hear back on a message left after the business' Chapter 11 filing, so we're not exactly waiting by the phone this time, either.)

The Herald-Sun notes debts in the initial filing of $1 million to $10 million, much of which presumably is due to their landlord, Scientific Properties.

Scientific had apparently long hoped to open a restaurant in the bay next to Somerhill in their home in the Venable complex's Prizery building -- something Rowand crowed about in a video recorded at the gallery's grand opening a couple of years back.

Has the gallery been challenged by the worst recession in generations? By the lack of the retail draw in the absence of a restaurant? By the relative inaccessibility of the Roxboro St. site, which is isolated by the jail, a railroad overpass and two car dealership sites from the "heart" of the city center and American Tobacco districts? By a customer base in Chapel Hill and Raleigh that wasn't ready to get hip with a central Durham site?

No idea. Our guess here at BCR is, probably some or all of the above.

But will this be the end of Somerhill, after nearly four decades -- or will Rowand, as at least one of the (perhaps hopeful) rumors we've heard suggests, look for a site back closer to his historical location in Chapel Hill?

We don't know. If Rowand calls us back, we'll share what we hear.

This is tragic. While the economy certainly didn't help I will personally hold Scientific Properties responsible. They trumpeted this announcement and all of the positive things they would do to facilitate growth at the Venable site. Putting a US Bankruptcy court next door isn't exactly what I'd call strategic leasing or economic development. Maybe if Andy Rothschild hadn't jumped ship he could have gotten that property leased up and done what he promised to help this triangle institution succeed.

Scientific Properties should be ashamed of themselves for bleeding this man to death. Dirt bags...

I personally won't miss this gallery as they've never had the type of art that I'm interested in. However, i'm definitely saddened by the loss of such a long-standing gallery.

I definitely think that location played a part in its demise. While the space itself is beautiful..its location is rather isolated and confusing to navigate.

Also, Somerhill never tried much to connect itself with the local arts community in my opinion. I think they just wanted to rely on their reputation and the same customers coming from Chapel Hill. That must not have been enough.

I don't have a strong opinion either way about Somerhill, but the Lisa Sorg's piece at Triangulator makes it hard to see this as trouble caused by an evil landlord: http://www.indyweek.com/triangulator/archives/2010/08/30/somerhill-gallery-declares-chapter-7-owes-more-than-a-quarter-million-dollars-to-artists

yes by all means lets blame scientific for repeatedly deferring rent. scientific clearly caused the downturn in the art market. i think they're involved in the unc football scandal too.

I was so excited when Somerhill moved in. An established gallery in Durham! Turns out it was an overpriced, overstuffed gift boutique (with some talent hidden in the storage rooms). Good riddance. There's a real opportunity for a challenging, cutting-edge Durham gallery (or two) that truly engages the local/regional art community.

ooh, ooh, i want a 15k a month salary to run a business that doesnt pay its rent...

@gonzo - it's not clear if that 15k salary came from revenue generated from sales or from contributed capital (his own cash)- an important distinction to make. Mr Rowand was a huge supporter of local restaurants and the DPAC and it's a shame that not more people went to bat for this guy.

I agree with John -- I don't feel like this gallery was ever really engaged with the Durham community. They don't participate in Third Fridays and I don't recall seeing them engaged with other Durham events. It is a somewhat awkward location ... you have to want to go there ... but if one wanted to go there, it is extremely easy to get to.

As for @Beibar's comment ... perhaps Rowand was paying himself with his own money, but maybe he should have been paying the artists whose work he was selling instead of himself. Likely there are still more details to be revealed ... but from what we know, it looks very bad.

@ belbar,
regardless of where the 15 grand per month was coming from, he could have been paying at least some of his gallery's rent, downsized, something... seems pretty cavalier to me...

This is the last thing I will say about the issue - Scientific Properties could have, and should have, worked with Joe to negotiate a more sustainable lease, otherwise work with him on a sublease to get someone else in there. I understand this is a business transaction, nothing personal against Joe, but it seems a little short-sighted to not renegotiate a sustainable rent in this kind of economy. Do you think anyone else wants to be move into that space? Is it worth 17k a month?

Joe Rowand is a scoundrel of the worst kind. I first hope that the artists he has robbed will receive swift reimbursement from the sale of his mansion.

At 15K/ month in salary he bled his own business dry. Additional paid in capital makes no difference- once the capital is injected, it belongs to the business not him, the business is a separate legal entity. (And a significant portion of the business's capital may have been contributed by lenders not the owner) Most landlord's will grant rent relief or restructuring in times of crisis, particularly in economic times like these- receiving less rent is better than collecting no rent. But landlord's will usually only do so if the principals of the business share in the pain as well. If you were the landlord, would you reduce his rent when he is drawing 200K per year? And now it appears he may be protecting the assets he drained from the business under the cloak of personal bankruptcy. And all this with no mention the artists he stole from. Scoundrel!