Casbah -- which, along with Motorco Music Hall (the rechristened name for The Geer), is one of two new music clubs on the horizon in Durham -- is getting closer to its big debut. 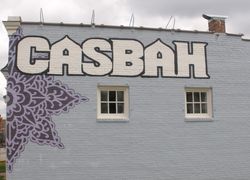 Owner Jana Bradley announced recently that the club, which will have a capacity of over 300 and looks to book everything from rock to Americana, is targeting a mid-September opening.

And the club's hired a talent buyer to plan bookings and shows at the space. Steve Gardner, a two-decade veteran of the music scene with experience at Yep Roc Records and the onetime Durham legend Sugar Hill, will take the reins for finding and scheduling performances.

Gardner -- who's also a familiar voice on WXDU, the Duke-affiliated college radio station -- promises to look for unfilled musical niches and to try to bring sounds and performances not available elsewhere in the Triangle.

Meanwhile, construction crews continue to wrap up work at Casbah, whose mural art on the western wall of the onetime Wells-Lloyd Florist building has been a concrete sign of new sounds on the horizon for the Brightleaf Square area.

The club's Facebook page notes that final plumbing and electrical inspections were completed yesterday, opening the door to a rise in intensity in booking action, we'd surmise.