It's been a good week or more of news for our beloved Durham Bulls.

First, there's the team's clinching of the International League's South Division pennant -- again, and guaranteeing the defending IL and national champions a slot in the playoffs and a back-to-back chance. 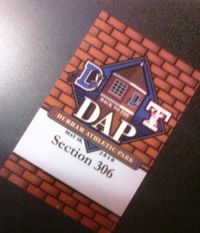 Then, there's the Bulls' victory Sunday, clinching the all-time AAA win record for the franchise (84), and in sight of the 89 wins record set by the franchise in its Class A days back in 1962.

And Friday night saw the Bulls alum Dan Johnson hit a game-winning walk-off homer for parent club Tampa Bay as they sent the fifteen fans who could be bothered to show up at The Trop in St. Pete home winners.

(C'mon, Tampa and St. Pete. You have arguably the best team in baseball and it takes the promise of a Vanilla Ice concert after the game -- seriously -- to turn out fans in numbers. Why don't we take the major league franchise and y'all can be demoted to AAA?)

But for this Durhamite, just maybe the best news of all came in a blog post from Capitol Broadcasting's sports group VP George Habel, noting that the team would return to historic Durham Athletic Park for a game this coming May.

The renovated DAP hosted the Toledo Mud Hens for what was thought at the time could be a one-time affair this past spring, a game that packed the old park to the rafters for a sense of what once was back when the Bulls still were Class A, before their grand last-game-at-the-DAP (and then their "second annual" last game at the DAP when construction on the new Durham Bulls Athletic Park was delayed.)

That trend of once-for-history repeating itself seems to be in vogue now with the DAP return game, which Habel writes was something that DAP operator Minor League Baseball and the City of Durham both encouraged.

Not that the logistics aren't hard, damned hard, as we noted here back in the spring:

I ran into Michael Goodmon outside the historic Durham Athletic Park, and complimented him and the CBC organization on the great job putting together the Bulls' one-night-only return to the old ballpark.

Not that it looked to be an easy task, I acknowledged. Two massive portable lighting trucks added illumination to reach the right lumens for a AAA-level game; big JBL speakers appeared to be temporarily mounted in the stadium to allow the announcer to be heard; temporary stands and facilities for beer and other concessions abounded.

"I can understand why y'all may not want to make a regular event of this," I joked, noting the huge undertaking of logistics needed to bring a game to the old park.

It was, to say the least, a massive effort to move the Bulls just to the other side of downtown for a very different game.

But 2011 will see it happen again, this time with a Monday, May 9 date against the Indianapolis Indians.

Terrific. If you missed the DAP game last time, you really missed a beautiful night in a beautiful park.

Kudos to the Bulls and all involved on the planned return.

(See the team's press release for more on the 2011 schedule.)

Back to the DAP, again!

This time, on my birthday!