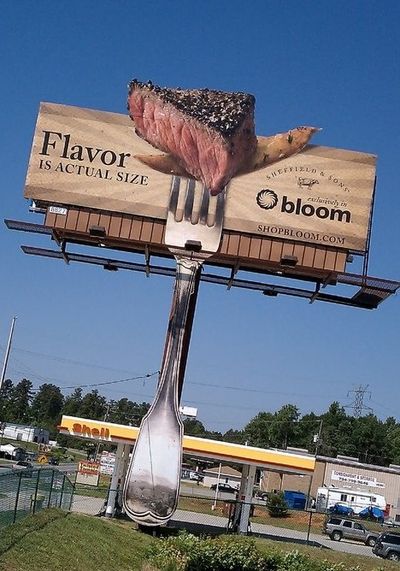 Supporters of allowing electronic billboards and improvements to billboard structures in the Bull City -- which has had outdoor advertising restrictions for a quarter-century -- say Durham could permit these structures and come out smelling like a rose.

To billboard opponents who cite the visual clutter of billboard-infused roads like I-40/I-85 between the Triangle and Triad, the whole idea just stinks.

Whatever scent you attribute to the twin lobbying efforts of the billboard industry and neighborhood activists, there's little doubt that neither side contemplated the newest front on billboards being opened up in Iredell County, near Charlotte.

You thought electronic billboards were high tech? Wait'll you get a whiff of the latest whiz-bang idea in outdoor advertising: scented billboards!

Yes, Bloom -- the grocery chain founded by Food Lion to help them have a way to distribute groceries in stores that, well, don't stink themselves -- is "wafting black pepper and charcoal smells" from a sign in Mooresville.

According to the N&O:

After all, you can tune out noise. You can disregard other signs. But a new smell? "It will definitely catch your attention, because we have to breathe," notes Harald Vogt, founder of the Scent Marketing Institute, a New York-based independent consultancy....

A high-powered fan attached to the bottom of the billboard pole disperses the aroma by blowing air over cartridges loaded with fragrance oil, Dameron said. ScentAir has used the system at outdoor events or large indoor spaces, including the 2008 World Series at Tropicana Field in St. Petersburg, Fla., which smelled like oranges....

"It's another way that out-of-home advertising is adapting to new technologies," Golimowski said. "You see digital billboards, Bluetooth-enabled bus shelters, mobile phone apps. Something like this that engages all of the consumer's senses and really evokes a sensation and memory is another very interesting step."

Of course, scented billboards weren't a gleam in the eye of the billboard industry when Fairway Outdoor Advertising began lobbying for changes to Durham's strict billboard regs.

And there's no sign that such scented billboards would be proposed for Durham. Then again, Fairway without the "f" spells "airway".....

I think scented billboards for casual passersby wouldn't be horrible... but if, for instance, I *worked* within 100 yards of a grape-scented billboard, I'd have to quit.
When I think 'electronic billboards', I envision the hundred or so tacky 'South of the Border' signs I saw along I-95(?) as a kid.
Please don't let us have gigantic rotating pinwheels of sheep... please?

"But a new smell? "It will definitely catch your attention, because we have to breathe," notes Harald Vogt, founder of the Scent Marketing Institute, a New York-based independent consultancy...."

It's all pollution and needs to go away.

Anybody with chemical sensitivities (e.g. to any kind of synthetic scent) would be thrown into health distress passing one of those things. Like we need more pollution in the air.