Hey Chatham, Orange: thanks for the retail sales, y'all coming back to shop some more?

One point of interest we here at BCR read over at the Chapel Hill Magazine blog (it's the sister pub of Durham Magazine, for which yours truly is a columnist) -- a reminder of just how important Durham's burgeoning retail scene has been for drawing tax revenue from our wealth-attracting, development-abhorring neighbors to the south and west.

It came in the context of comments by leaders of the Chapel Hill/Carrboro Chamber of Commerce during a presentation on the state of their constituent communities.

Chapel Hill has seen some growth in the past decade -- over 9% population growth, more than one might expect given the slow-growth/no-growth stereotype that accompanies the lighter shade of blue's home territory.

But even as rooftops have grown in Chapel Hill, Carrboro and down in Chatham County, there hasn't been much retail to go along with it. Instead, the last decade has seen Patterson Place, Indigo Corners, and -- most notably -- Southpoint and its environs sprout new shopping opportunities.

And it's an anomaly that has meant big bucks for the Bull City, all too often at the cost of neighboring communities' tax revenues.

We sometimes talk cynically about I-40's Zone of Retail Safety, given that national retailers seem to believe in some kind of Flat Earth theory in which you fall into oblivion if you drive more than a mile north of the Barstow-to-Wilmington corridor.

But then, it's easy to see the problem from retailers' perspective. South Durham and CH/C have the most attractive demographics by pure numbers alone in the western half of the Triangle.

Yet it's relatively more difficult to develop new retail in Chapel Hill, making Durham's more development-friendly environment a natural destination for retailers who want to be close to the south side of Tobacco Road without actually crossing over the county line.

CH/C chamber president Aaron Nelson told the crowd at the presentation that their region's commercial tax base was declining as a percentage of the total area taxable property value.

And a big driver of that gap? Not keeping up with retail sales opportunities arriving in Durham and elsewhere.

“We abhor what we desire,” Nelson said, according to Chapel Hill Magazine “We shop at Costco, but we don’t want a Costco.”

The impact of that difference is stark, as this chart from Nelson's presentation demonstrates. Retail demand appears to be the retail sales that should take place, ceteris paribus, in a community based on income and population levels -- versus the actual levels of retail sales. 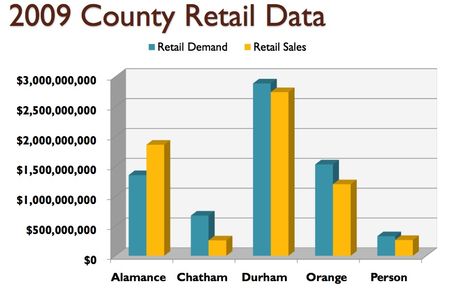 And in the case of both Chatham and Orange County, the leakage is clear -- a nearly $700 million gap estimated in 2009 between what their counties' residents would be likely to spend and what actual sales occurred.

Of course, Durham isn't the sole recipient of these dollars; and in fact, Durham's clearly leaking some retail dollars according to this graph. (Best guesses: Brier Creek and other Wake Co. destinations.)

Still, the growth of retail in the Bull City in the past decade has had a noticeable impact on sales tax collections, as we looked at here back in 2009. 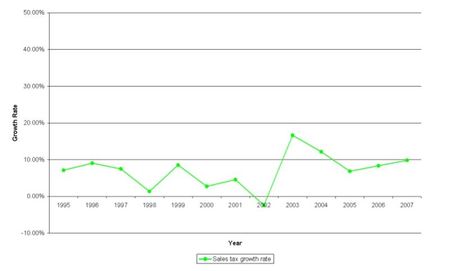 Another big winner in the retail game has been Alamance County, which has seen big retail growth on its western edge with a shopping center that draws leakage from the eastern side of Guilford County.

And Orange County is on the verge of facing still more leakage: the arrival of the Tanger Outlet Center in Mebane, set to open later this year with outlets from Sak's, Brooks Brothers, Coach and more. The Herald-Sun gravely noted last week the Tanger center would be "one more draw on Orange County sales tax revenues":

Kathleen Ferguson, chairwoman of the Orange County Economic Development Advisory Board, has been studying the economic climate in the region. Saying she was speaking for herself and not as a representative of the board, Ferguson said businesses and retail centers are setting up shop just outside the borders of Orange County on purpose with the expectation that shoppers in Orange County will drive there to shop.

Often the CEOs and mangers of those businesses like to live in Orange County so their children can attend its schools, but trying to build a business in Orange County is often too difficult and takes too long.

Not that the Tanger outlets will only impact Orange, mind you. It's not impossible to imagine Bull City shoppers creeping westward on I-85/I-40 to check out the shop-portunities for themselves.

If I remember correctly, Streets at Southpoint was responsible for $2.2M a year in sales tax revenue. I'm not sure where I heard this number, or what the analysis is.

I would guess that the Tanger's outlet mall opening will be hard on the Northgate Mall. Northgate is primarily used by low to moderate income people whereas the more affluent crowds usually go to the Southpoint area.

So really why go to Northgate when a 15 minute drive takes you to Tanger's outlet mall where prices will be even lower.

I would not want the Northgate Mall to go out of business because this would be a pretty big space to renovate and it would have a negative impact on the home values located between this location and the Duke East campus.

But I agree, shopping in Chapel Hill is really not fun. Even the Mall where Southern Seasons is located looks like an Antique from 1970. Only the arrival of Trader Joe's allowed for the revitalization of the street mall at the intersection of 15-501 and Franklin Street.