Durham's Ashley Furniture to close -- what's next for Westgate Plaza? 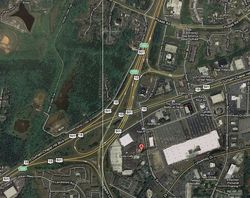 In what's got to be the least-surprising retail move of the year, Ashley Furniture HomeStore is announcing the closure of its south Durham location, with a liquidation sale starting in July, according to a story in Furniture Today.

The Shopping Center Group -- owners of the Westgate Plaza adjacent to the old South Square Mall site -- had listed the Ashley Furniture retail space as being for-lease since at least January 2009. The company did not respond to an inquiry from BCR at that time about the property's fate. (The plaza is now apparently represented by one Sam Spiegel of Deerfield Beach, Fla.-based Samco Properties.)

In shutting its doors, Ashley will join a wide range of businesses, including Circuit City (chainwide bankruptcy) and Applebee's (2005 closure, reopening at Patterson Place) to have left the center in recent years.

A representative for the franchise licensee that operates the store tells Furniture Today it is "considering alternative sites in the greater Raleigh-Durham area for an eventual relocation."

And from this quote from the representative, it sounds like that's more likely to be in Raleigh than in Durham, given what sounds like a reference to the Raleigh focus of TV and print media buys--

"We're reviewing some other opportunities within the Raleigh area and if the right location becomes available for the right price we would certainly consider other locations," Hodge said. "We want to capitalize on the TV and newspaper media we are currently using as much as possible."

Raleigh and Clayton are already home to Ashley's locations.

Furniture stores have had mixed success in the 15-501 corridor.

A Rhodes Furniture store to Ashley's south shut, likely due to the chain's bankruptcy and acquisition by Rooms To Go; a RoomStore took its place, with a lease running through 2017.

Meanwhile, a Haverty's closed a couple of years ago in the usually-golden I-40 retail belt, along 15-501 near I-40. The Durham-Orange chapters of Habitat for Humanity opened a ReStore retail shop in its stead.

More broadly, what becomes of the Westgate Plaza with this move?

But that doesn't factor in 35,000 sq. ft. of Ashley Furniture HomeStore space. Add that in, and you've got almost half the center vacant.

On the other side of the SuperTarget/Sam's Club complex sits the onetime Kroger site, demolished in preparation for University Marketplace -- a project on indefinite hold at best, it seems, due to the challenging economic conditions for obtaining financing.

And as we noted last night here, Restaurant Eden closed up shop in the SouthCourt building just behind it.

Eventually, of course, a transit line may run near this area, connecting downtown Durham and Duke to Chapel Hill via the fast growing NC 54 corridor.

Three years ago, I'd be saying that we should be careful to make sure the "wrong" kind of development shouldn't fill up the site, to make sure that transit-oriented development (more than the kind of big-box stores that took the South Square Mall's place) replaces any of these dying retail strips.

Then again, given how slowly this part of Durham is moving for retail, I have a sneaking suspicion the market will take care of that all by its lonesome.

The dilapidated Toys'R'Us next door can't be far behind - that store has seen any maintenance in years, and it shows. I drop in there from time to time, and it's never exactly crowded.

And Ashley's lovely sign affixed to the building is considered conforming, as I understand it. I'm sure that adds value to any prospective tenant.....Geez.

I think a Durham edition of Trader Joe's would be perfect in either of those two spots.

wow. Terrible news. There are some struggling businesses in that space and it looks like their struggle just got harder.

Too bad they chose to site the new high school north of I-85. The old car dealer & Kroger sites east of South Square might have made for a good location.

Ashely's, yeah, not a surprise and I didn't even think the Toy's R Us was still open. Tuesday Morning and Rugged Warehouse though still seem to be hanging in there with regular business.

Meanwhile, I actually saw some people going into the old Kroger site very recently. The Poppies sign has apparently come down but I'm very much hoping another healthy market (Earth Fare perhaps?) or TJ's takes its place--perhaps giving enough leverage to restart the project.

The developers were wonderfully proactive in asking the neighborhoods what we wanted to see there and I know, thanks to Kevin, that it is being developed by the same folks who did the lovely Shannon Square. Crossing fingers funds have come through for them to at least start part of the development.

The California based grocery store chain Super Save Mart has submitted an administrative site plan to the city to place a store in the old Circuit City store site.

Below is a link to this month current site plan submittals. It is located on the last page of the pdf.

The California based grocery store chain Super Save Mart has submitted an administrative site plan to the city to place a store in the old Circuit City store site.

Below is a link to this month current site plan submittals. It is located on the last page of the pdf.

Sorry to see another store close in the area, but the only time I ever went in they didn't have what I was looking for - a bookshelf. When I asked them about it, a store clerk said, "People don't read anymore."

^Wow. With that kind of service, it's a wonder they didn't stay in business longer...

I don't think Trader Joe's or Whole Foods would be a likely fit for this spot since they've both got stores about 5 miles away in CH. The area could certainly use something though; it seems kind of like a ghost town right now, especially with the vacant University GM buildings taking up such a large footprint.

The city should probably buy up and land bank the University GM site as a future stormwater control site. With all the surounding development and impervious surface, there's bound to be some stormwater mitigation needed.