Durham’s food trucks have gotten quite a bit of press over the past few weeks, most notably with a special feature in the N&O and a New York Times piece that featured Daisy Cakes (in addition to several other Durham restaurants) -- and in this week's Indy Week feature to boot.

If you haven’t had a chance yet to visit the roving restaurants, this Sunday is your chance. 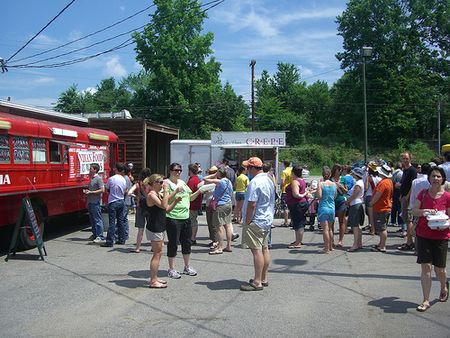 An email circulating the listservs notes that this Sunday, June 27, the second installment of Durham’s Food Truck Rodeo will be convening at the Durham Farmer’s Market Pavillion at 501 Foster St in the Central Park district.

As seen in the picture from the first event, the crowd is expected to be large, so arrive early if you want the best selection. (Last time around, a number of the trucks ran flat-out of food, though there's promises of more supplies this time 'round.)

Also, note that most trucks are cash only; if you forget, closest ATMs are at RBC Bank (Morgan/Morris) or the downtown Marriott.

Besides the food, there'll be music by Durham's own DJ Piddipat's Dance Party.

The Latin@ Community Credit Union also has an ATM at the corner of Mangum and Seminary. It's a SECU too!

Isn't it great how a little bit of free enterprise works? This thing wouldn't be allowed in Cary. I'll try not to miss it this time. Some of these vendors I've never heard of.

Glad that the venue will be more accessible! The last one was awesome and this is one of those "Only In Durham" events that you can't miss!

The link to Mom's Delicious Dishes, in case anyone is interested: http://www.momsdeliciousdishes.com/

Great location, good vibe, not so great execution. Indy said it started at 5pm - and we got there before 6pm and Only Burger was the only truck left with food and a VERY long line. So we grabbed a loco pop and left... passing about 30 folks heading in on the way back to the car.

How about some taco trucks this time?